“If you don’t do anything, nothing can go wrong.”

So sings a pop-up character not otherwise involved in the story of “Romantics Anonymous,” the hyperglycemic 2017 musical streaming live through Sept. 26 from the gorgeous Theater Royale in Bristol, England.

In the tradition of Act II opening numbers, the song reintroduces the plot — about two pathetically timid French chocolatiers who can’t break out of their shells — while also expanding it thematically to encompass this pandemic moment. Its warning about love and bonbons, both of which apparently demand great daring, turns into a warning about our recently comatose theater: “We can’t do nothing.”

And to the extent “Romantics Anonymous,” directed by Emma Rice, offers a real live musical with a cast of nine, singing and dancing together on an actual stage to the accompaniment of a four-person band, it is doing something most welcome. When the chocolatiers kiss, with no Zoom grid or Plexiglas baffle anywhere in sight, you feel like applauding, and not just for them. Perhaps our Sleeping Beauty art form is finally awakening from its six-month blackout, at least in Bristol.

But musicals should aim higher than mere industry boosterism. Yes, it is noble that the producers of the show — Wise Children, Bristol Old Vic and Plush Theatricals — reconfigured it as a virtual “tour” to support theaters around the world, including many it planned to visit in person before the pandemic intervened. And “Romantics Anonymous” gets bonus civics points for making closed-caption and audio-described recordings of the livestream available to everyone on Sept. 28. 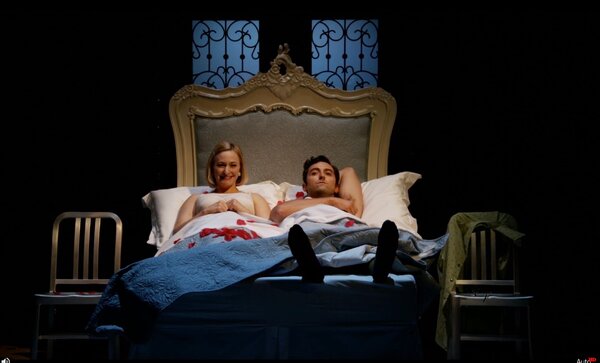 If only good intentions were enough to make it good! But unless you already love this kind of material — French whimsy in the manner of “Amélie,” with a soupçon of “Waitress” and its relentless food imagery tossed in — you are not going to find that musicalizing the 2010 French-Belgian film “Les Émotifs Anonymes,” already an acquired taste, has made it any more satisfying.

That it follows every rule in the musical theater handbook is actually a problem. The songs (lyrics by Christopher Dimond, music by Michael Kooman) are as sweet and unobtrusive as the main characters — which sounds like a good match of form and content except that with passive, inexpressive types like Angèlique (Carly Bawden) and Jean-René (Marc Antolin) you want contrast and gumption. Without them, and despite the glugs of style Rice slathers on everything, the story has no bite.

Please excuse the confectionary metaphors; the thematic discipline imposed on the show is insistent enough to gratify a masochist. The opening number immediately points out that “chocolate makes the darkness somehow bright” and “bitterness is what it takes to make the taste complete.” Elsewhere we hear about the need to follow recipes for success in business and, in a supposedly sexier vein, how “the thing about chocolate is that its flavors take time to penetrate.”

This sophomoric cleverness (the book is by Rice, based on the screenplay by Jean-Pierre Améris and Philippe Blasband) feels incongruous in a story supposedly about growing past pain. Angèlique is one of the best chocolate makers in France yet hides her pralines under a bushel — apparently because her mother, according to one scene and song, is a louche loudmouth. Jean-René has parent problems too: His disapproving late father’s insistence on traditional methods and flavors is driving the family business into the ground.

Naturally, the two must face their demons and conquer them; Angèlique with the help of a 12-step-like program called Romantics Anonymous, and Jean-René with the encouragement of his jolly employees. (All these and more — mustachioed waiters, neckerchiefed sailors, wisdom-spouting bellboys and assorted oddballs — are played by the chorus of seven, changing costumes and flipping wigs from one stereotype to another.) If you don’t know right from the start that the plot will end with marriage, and also with Angèlique turning Jean-René’s moribund business into a success, you haven’t seen a musical ever.

That obvious wrap-up would have been fine — as it is in many great musical comedies — if what happened along the way ever caused a ripple of genuine complication; it doesn’t. (Even the surprises are predictable.) The dialogue and lyrics are too ceaselessly winky to dignify actual growth or suffering, and the attempts at humor also fail; faint to begin with, they suffer further from the lack of a live audience. And though the sets and choreography are nicely shot for the livestream, which went off without a glitch on Tuesday, there isn’t much to distract you from characters so stylized that they have just about nothing left in common with humans.

Stylization has long been Rice’s long suit; in “Brief Encounter,” “The Red Shoes,” “Tristan & Yseult” and other productions for Kneehigh, the theater where she made her name, she dialed character reality down to nearly zero in order to wow with sensation. Often, she succeeded, especially when the material was already bursting with archetypal significance and musical bombast.

But despite a charmingly serious performance by Bawden — she alone never winks — the characters in “Romantics Anonymous” are too fey to support the kind of aesthetic superstructure Rice insists on building. Angèlique and Jean-René are no Laura Jesson and Alex Harvey, the would-be adulterers in “Brief Encounter,” whose intimate story is made large and grave by the possibility of real tragedy and the proximity of imminent war. Of course, their soundtrack is Rachmaninoff.

Here, though, neither the pleasant score nor the fate of Angèlique’s apricot-infused truffles is enough to justify two hours of tedious twee. So though I agree with “Romantics Anonymous” that doing nothing is insupportable, I have to add that with vaporous stories like this one, it can be just as unsatisfying to do too much.