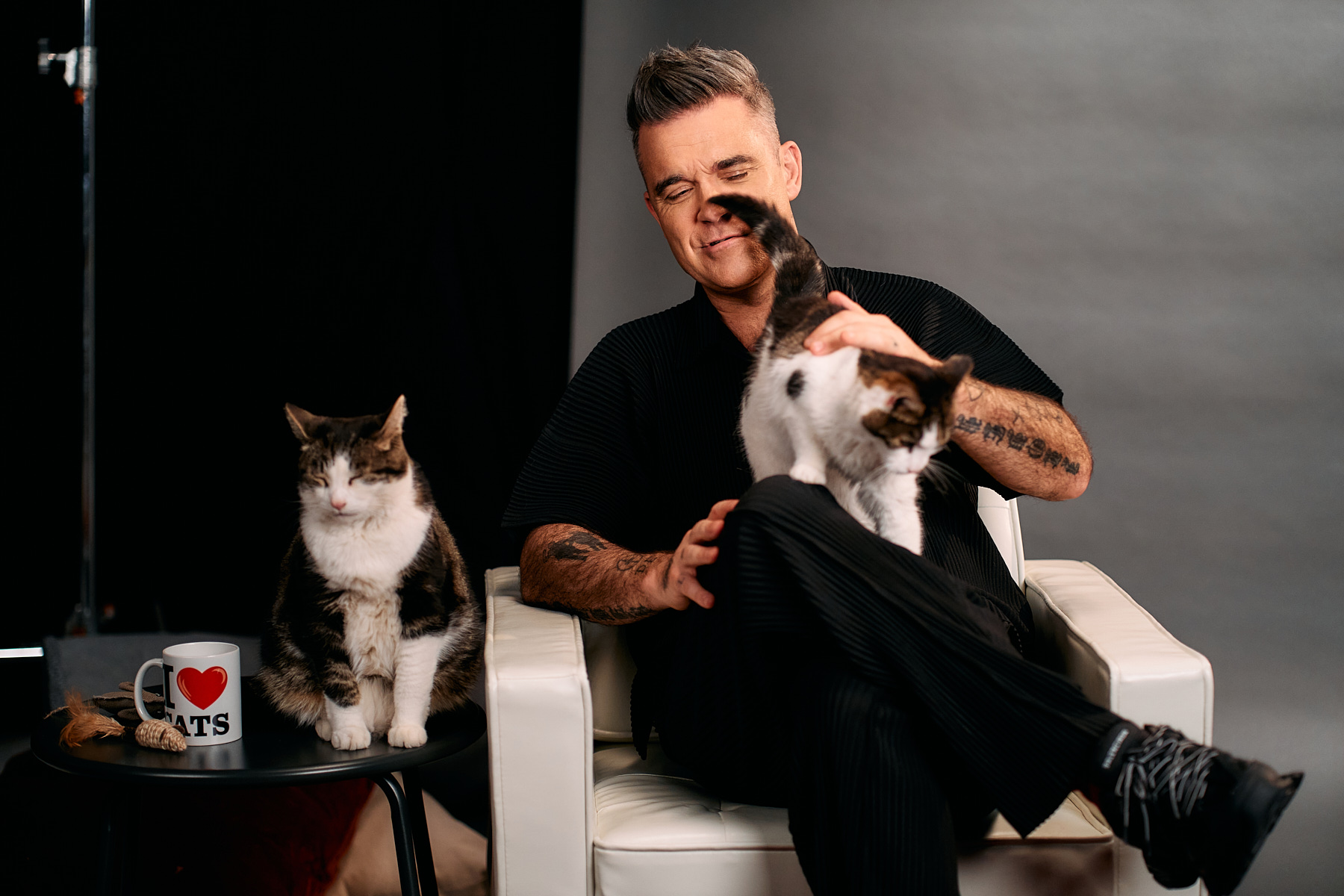 It can never be said that Robbie Williams isn’t up for branching out in his career as he announces a partnership with cat food brand Felix.

The former Take That icon has gone on to find major success as a solo artist, and is also reported to be joining the wine world by launching his own brand, despite not drinking alcohol himself.

The father-of-four is a serious cat lover, with he and his family having their own, and is apparently a big fan of the animated cartoon adverts, too.

His new project has seen him write and perform a brand new track celebrating cats titled It’s Great To Be A Cat – as well as star in a short film alongside the moggy.

The video sees Robbie try to record his new track as Felix does what cats do best and sabotage everything while being too cute to get annoyed at.

Speaking about his unique new project, Robbie said: ‘The cat is out of the bag, I’m the new voice of Felix.

‘I’ve been a long-time fan of cats, I’ve had many feline friends over the years and after studying their fascinating behaviour, I can confidently say, It’s Great To Be a Cat.’

Robbie will act as the new voice of Felix throughout the UK and Europe as his song becomes the main event of the major advertising campaign.

The track is also available to stream on Spotify as of January 25, as well as website FelixandRobbie.com.

Robbie’s new collaboration is sure to be a hit with his four young kids Theodora (Teddy) 10, Charlton (Charlie), eight, Colette (Coco), four, and two-year-old Beau.

The singer recently gushed over his eldest daughter Teddy as he described her as his ‘mini-me,’ declaring she was a born performer – making him second-guess the fact he has chosen to keep his children out of the limelight.

‘Ted’s a performer, way ahead of where I was at the same age as her, just unbelievable,’ he proudly told fan podcast Robbie Williams Rewind.

‘She, in particular, is a mini-me when it comes to performance.’

He added that he was ‘gutted’ to keep her out fo the limelight when he wanted ‘moments with her on stage’ but admitted it ‘may change’ in future.

‘We may decide to take a view and say, “Listen, let’s just do this,” but up until they’re 16 in the UK they’re not allowed to put their faces in the papers and I know it’s best for them to not become famous too young.’