Netflix might offer flashier, more stunt-studded interview shows than “Song Exploder,” one, say, in which Lizzo oversees the loss of David Letterman’s virginity as a rapping flutist. But would any of those devote even a minute to the glories of the flexatone? That’s the surgical-looking percussion instrument that, once shaken and bent, can sound like a triangle on a cartoon acid trip. The musician Ty Dolla Sign uses one on his song “LA,” and he praises it in the maiden season of “Song Exploder,” except, dang it, he can’t remember what the thing is called. The show’s creator and host, Hrishikesh Hirway, fills the blank in. Ty Dolla’s attempt to jog his memory has the adorable comprehensiveness of certain game show contestants.

I love this show, more maybe than Hirway’s podcast, which inspired it. The format’s the same: musicians talking about how they conceived and recorded one song. On Netflix, a season is apparently a thimbleful of episodes and none exceeds half an hour. So they’re rewatchable. And the four in this first batch — which also includes interviews with Alicia Keys, Lin-Manuel Miranda and R.E.M. — are wonderful, in part, for their “aha,” “eureka” and “well, I’ll be” moments, like, in Episode 3, when the R.E.M. drummer Bill Berry realizes that there really are handclaps in the final mix of “Losing My Religion.” Epiphanies like that are akin to the part of “Finding Your Roots” when Henry Louis Gates Jr. shocks some famous person (Questlove, Ben Affleck, Ming Tsai, Amy Schumer) with the facts of the family tree. Good TV. 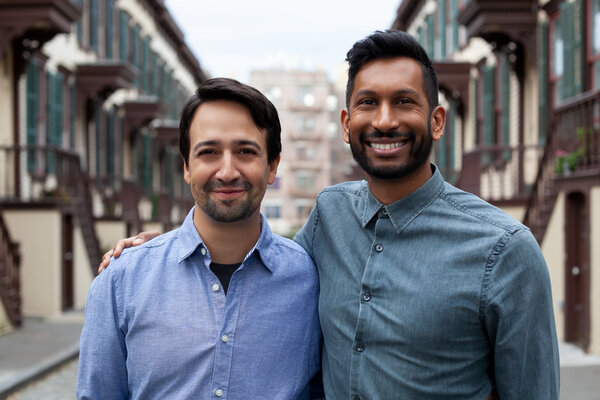 But the new show’s other strength is its interrogative diversity. Each episode begins with Hirway concisely setting the table (this is the artist, this is the song) and ends with the song being played in its entirety. After the introductions, the episodes are guided by the personalities of the artists and the particular provenance of the song. In Keys’s episode, for instance, she’s looking for the song (“3 Hour Drive”) as opposed to exploring how it was found, the way the other artists here do. She arrived in London to write and record without knowing precisely what. Hirway has video of her in a room with the producer Jimmy Napes and the songwriter and singer Sampha, confabbing and noodling.

A podcast doesn’t need all of these assets (procured video, montages of old footage) the way 20-something minutes of television do. A podcast episode could have survived just on Keys, Napes and Sampha narrating for us. But the television incarnation is satisfying. There’s excitement in watching Alex Lacamoire, the music director of “Hamilton,” palm Miranda’s shoulder as they’re having a moment of exclamatory recall on how “Wait for It” came to be one of the musical’s emotional summits. There’s the stressed visage of Michael Stipe, R.E.M.’s singer, wincing as he’s forced to a listen to a 30-year-old vocal track.

The show does need to find a better way to present the finished recordings. Right now, the music videos it makes for each song (often animated and complete with visualized lyrics) tend to align the songs with what they’re not: kitsch.

Still, there’s an idiosyncratic ambition at work here. You can imagine a show entirely interested in back-catalog nostalgia, one in which somebody “explodes” erstwhile chart smashes and bygone jams in order to get us feeling good again. Hirway isn’t that somebody. Only one of the four songs here was a hit single, and it’s from 1991. Who knows how the songs are chosen for the Netflix show? Keys’s is from a brand-new album. Ty Dolla’s is the opening track of his debut, “Free TC,” from 2015. Hirway’s approach isn’t cultural. We have other sweet-spot sources of illumination for that, like the podcast “Hit Parade,” Chris Molanphy’s spelunk through the Billboard charts and The Times’s own video series “Diary of Song,” in which current hits are dismantled and essentially reassembled by the people who made them.

As a title, “Song Exploder” has tended toward the opposite of mayhem. My understanding of the individual songs isn’t blown apart. If anything, I feel closer to the music by the end. Even when I’m not crazy about the song, I’m repeatedly reminded of the alchemical fusion of skill, ingenuity and happenstance that culminates in art. I learn things; one connection among the songs in the Netflix version is how crucial the concept of space appears to be, whether it’s the rest between notes, atmospheric calm or the sui generis rhythm in Berry’s drumming. The show invites you to crawl through a window of the creative process and feel both exhilarated and humbled by it.

“Song Exploder” is more like “Dissect,” a podcast series that takes an encyclopedic approach to album appreciation, except Hirway’s sessions are crisper and his interest in craft borders on the psychological. A good interview show can overlap with therapy. Hirway is one of few hosts who could be an actual therapist. He makes Dr. Phil look like he works for Vince McMahon. Hirway is present, gentle and almost palpably attentive yet stoic. In the opening minutes of the Keys episode, she asks him what his sign is. “Aquarius.” Hers, too, but that’s about as far as that conversation goes because he wants to get down to business. Time’s a wastin’. He’s not so much immune to her charisma (or Miranda’s) as he is curious about the ends to which it’s put. When Hirway hits Ty Dolla with a vocal track for “LA,” the singer bristles. You’re not supposed to have that. But “that’s the secret sauce of the show,” Hirway informs him.

He’s especially good with R.E.M. Each member is interviewed separately, but he gets them responding to one another nonetheless. During his exchange with Stipe, Hirway asks him to inhabit the mind-set of the protagonist of “Losing My Religion,” something I don’t know that any interviewer had successfully achieved with respect to Stipe and any R. E. M. song. But inhabit Stipe does. Once inside, he admits to finding a bit of himself in the song’s sense of paranoid infatuation. He lets Hirway push and probe. It’s tender and risky — affirming, too. Hirway wants to understand the song more than the people who composed it. Or maybe to understand the song is to understand its composers. Either way, I left the Miranda episode astounded by the complexity of “Wait for It,” a song about Aaron Burr’s smoldering long game; and was reminded anew that “Losing My Religion” is one of the greatest cloaked disclosures to lodge itself in both the Top 5 and the planet’s psyche.

Hirway is himself a musician, but I know that only because I read it somewhere. He doesn’t impose himself. He doesn’t do any palling around. But I’m guessing that he speaks the artists’ language enough to switch tacks and lure them toward an introspection deeper than what’s already evident in the songs themselves. I hope his demeanor can continue at this remove, because anybody can go behind the music. Few, though, are rigorous enough to go beneath it.