Colbert did not mince words in his greeting to the Senate candidate, who denied paying for a former girlfriend’s abortion, as was reported by The Daily Beast. 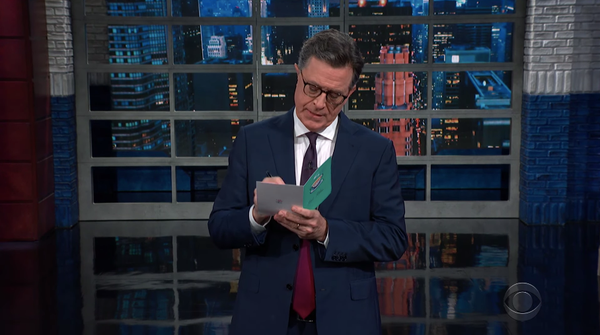 Welcome to Best of Late Night, a rundown of the previous night’s highlights that lets you sleep — and lets us get paid to watch comedy. Here are the 50 best movies on Netflix right now.

Herschel Walker, the Republican Senate candidate in Georgia and a noted opponent of abortion, denied reports from Monday that he paid for a woman’s abortion in 2009. Walker’s former girlfriend provided a receipt from an abortion clinic and a $700 check she received in a get-well card, The Daily Beast reported.

On Tuesday, Stephen Colbert referred to the situation as “a disaster.”

“So Walker went on the Fox News last night and was asked about this evidence by the most effective form of birth control known to man, Sean Hannity,” Colbert said.

“Well, sure, all celebrities send cards to complete strangers. In fact, you know what? Herschel’s going through a tough time right now, so let me just get this down real quick: ‘Dear Herschel, get well — you know what? Get [expletive], Stephen.” — STEPHEN COLBERT

“I mean, this woman says that she has a receipt, a check, and a get-well card that he signed. The only way there could be more of a paper trail is if he bought a souvenir T-shirt from the abortion clinic’s gift shop.” — TREVOR NOAH

“Imagine being so stupid you write a check for an abortion you want to keep secret. And that card, if you’re wondering where you can even get a card like that, you can find them right next to the ‘dads and grads’ section at CVS.” — JIMMY KIMMEL

“A former girlfriend of Republican Georgia Senate candidate Herschel Walker claimed in a new interview that Walker paid for her to get an abortion in 2009. And the only way that will hurt him with Republicans is if some of that money went to pay down her student loans.” — SETH MEYERS

“Former President Trump filed a defamation lawsuit yesterday against CNN and claimed that the network has made a ‘persistent association’ between Trump and Adolf Hitler. Yeah, come on, CNN. Can’t a guy hold a series of racist rallies in a country suffering skyrocketing inflation without being compared to Hitler?” — SETH MEYERS

“This is true, the lawsuit takes issue with CNN’s use of the words ‘racist’ and ‘insurrectionist’ when discussing Trump. I don’t want to help Trump in this lawsuit, but CNN also called him a billionaire.” — JAMES CORDEN

“Get this: Former President Trump is claiming that CNN is trying to hurt his image ahead of the 2024 election, and he announced that $475 million defamation lawsuit against the network. In response, CNN was like, ‘Hey, thanks for thinking we have that kind of money. Wow, we pay Anderson Cooper in Panera bucks, you know what I mean?” — JIMMY KIMMEL

“He sued CNN for defamation, charging the channel acted with ‘real animosity’ to cause him ‘true harm.’ True harm? They reported the facts! That’s like suing your mirror for giving you cankles.” — STEPHEN COLBERT

“Specifically, the suit claims that CNN tried to taint the plaintiff, which is not easy — the plaintiff is mostly taint.” — STEPHEN COLBERT

What We’re Excited About on Wednesday Night

Maggie Haberman will sit down to dish on her new book “Confidence Man” with Trevor Noah on Wednesday’s “Daily Show.”

The country music star Loretta Lynn died on Tuesday, leaving behind a legacy of fiery expressions of female resolve.