Babies don’t develop stereoscopic vision for the first few months of their life; they have a hard time perceiving depth and dimensions, and therefore gravitate to swirling shapes and bright colors. They and others with similar taste will find great pleasure in our culture’s latest virally transmitted spectacles, which distill fin-de-siècle French painting into an amusement as captivating as a nursery mobile.

Vincent van Gogh, his corpse moldering in Auvers-sur-Oise and his paintings out of copyright, has these past few years been dragooned into a new sort of immersive exhibition that reproduces his churning paintings of Provence as wall-filling animated projections — you may have seen them on Instagram, or on a Netflix indignity called “Emily in Paris.” The Franco-Dutch artist has always been a huge box-office draw (the Van Gogh Museum in Amsterdam drew 2 million visitors in 2019), but a touring exhibition of paintings takes years and costs millions, and reputable museums don’t lend their works to a for-profit enterprise.

What a few entrepreneurial exhibitionists figured out is that many of us are less attached to van Gogh’s paintings than to the mythology that surrounds them. And that you can exhibit for cheap. 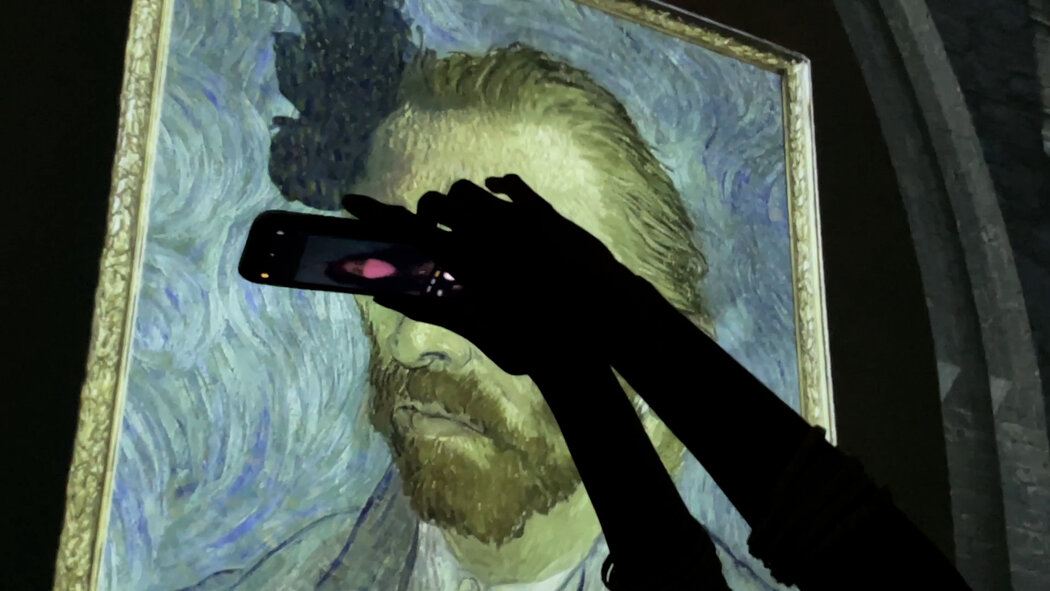 Producers have strung together hi-res digital copies of “Bedroom in Arles” or “Wheatfield with Crows” into medium-length films, supplemented with astral soundtracks (and well-stocked gift shops). These things are such profit spinners that half a dozen competing Vincent spectacles have arisen, drawing millions of visitors from Toledo to Abu Dhabi to shell out for a 21st-century version of the Joshua Light Show.

Now these “Starry Night”-filled rooms have come to the city that actually owns “Starry Night” — and indeed here in New York we’ve got 20-odd other van Goghs, held between the Metropolitan Museum of Art, the Museum of Modern Art and the Solomon R. Guggenheim Museum. Through the fall, these actual van Goghs share the island with two postimpressionist fairground attractions, one on each Lower Manhattan riverside, jockeying for supremacy in Google search results. 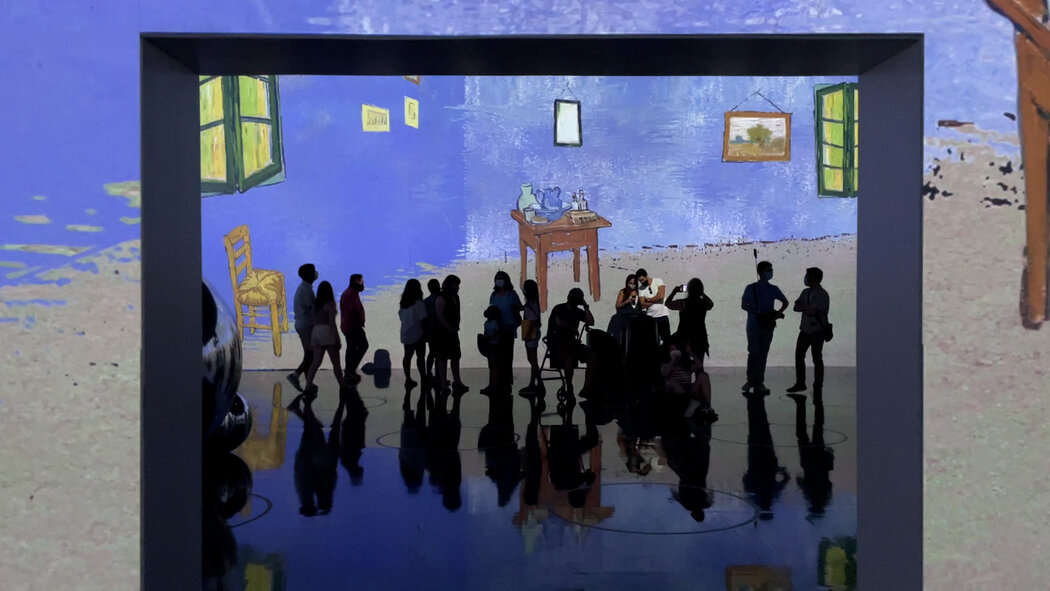 Like Vincent, I too suffer for my art, and so I attended both of them. If you are committed to trying one out, go to the east side, which has graphics of meaningfully greater sophistication. (Adult tickets range from about $36 to $55 and rise with various fees, supplements and hustles. MoMA is $25, and the Met is pay-what-you-wish for locals.) Whether you attend either or both you should bring a fully charged cameraphone; some might also enjoy a psychedelic supplement, and in fact the east side venue plans to install an absinthe bar later on. Sensuous selfie backdrops come well before intellectual engagement here, so you might as well make the most of it. 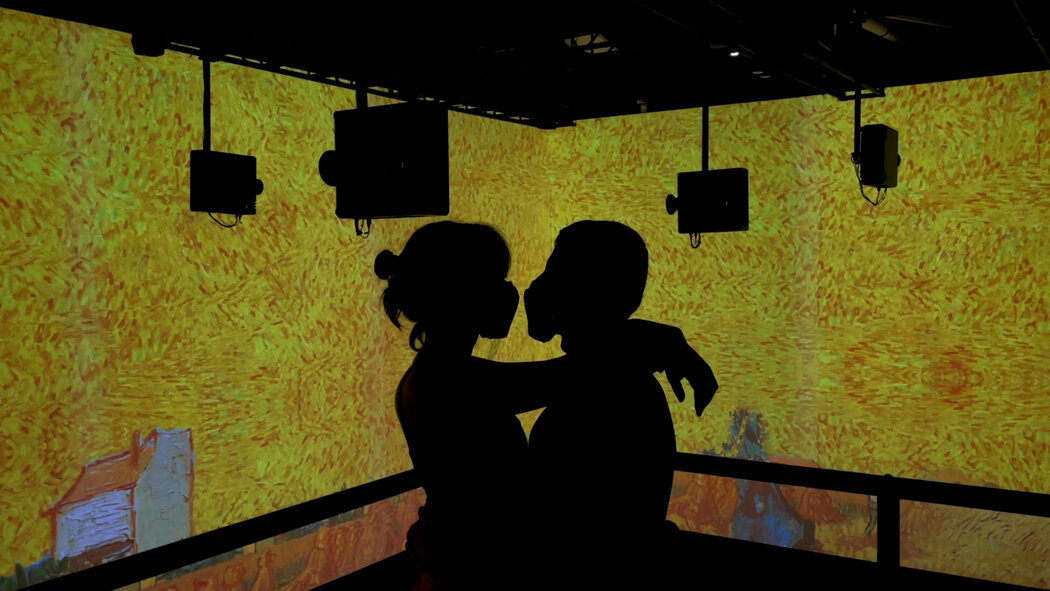 At the east side venue, designed by the Broadway set designer David Korins, three consecutive rooms display the same video projections, created by Massimiliano Siccardi. Mirrored objects strewn throughout reflect the screens; you sit on the floor, on a few benches, or (if you’re feeling flush) on a rented cushion.

On the west side, the projections fill a single, much taller room, equipped with beach chairs. An English-accented narrator drones van Gogh quotations over the west side’s projections; the east side show is unnarrated, backed instead by a trip-hop remix of Samuel Barber’s “Adagio for Strings” and, more curiously, Édith Piaf belting out “Non, je ne regrette rien.” The west side show offers more introductory materials, though really, you could just read the van Gogh entry on Wikipedia while you’re at each.

Both exhibitions emphasize van Gogh as a lone, tortured genius rather than a figure of history, and both imply through their editing and exposition that his thick outlines and non-local color were a spontaneous outpouring of his soul. Fair enough if you don’t want to chart the development of painterly style in 19th-century France, but even the rudiments of van Gogh are not easy to capture in photographic reproductions.

If you go to MoMA to see “Starry Night,” or to the Yale University Art Gallery (free admission!) to visit “The Night Café,” you can spend as much time as you like examining van Gogh’s mastery of impasto — that is, the thick application of paint that gives the paintings their nervous, shuddering quality. In these wall-size screen savers, impasto has to be mimicked through motion: dancing brush strokes, falling leaves, flapping crows. 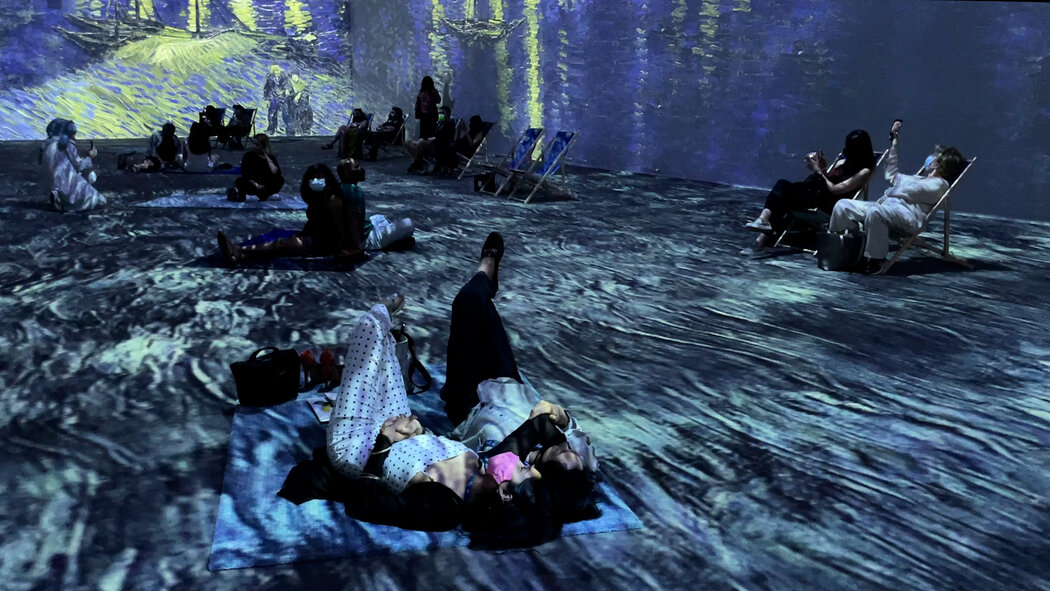 The animations at the west side show are rudimentary and have herky-jerky transitions that reminded me of the solitaire app I used to play in Windows 95. The east side show is cleaner and sexier, though not more sophisticated than the flat-screen visuals in airport terminals or sports stadiums.

In both cases, the digital reproductions — particularly of the 1888 Arles street scene “Café Terrace at Night” — strongly recall the escapist fantasies of anime, and the childish moral sentiments that go with them. Contrasted with the immoderate passions of the 1956 movie “Lust for Life,” or the 2018 biopic “At Eternity’s Gate,” these selfie chambers are as benign as the Japanese animated film “My Neighbor Totoro.” The art’s personal anguish and social tensions both dissolve into a mist of let’s-pretend; this van Gogh is less an artist than a craftsman of other worlds. (A “universe,” as the Marvel or Harry Potter fans say.)

As for the technology: although these immersives have been touted as breakthroughs in exhibition design, room-filling cinema projections go back many decades. The shows hark back in particular to multi-projector attractions at the World’s Fair in Queens in 1964 and at Expo ’67 in Montreal, which cast humanist visions of the future in all directions. What’s new today is something else: not the pictures on the walls, but the phone in your hand. Individual absorption, rather than shared wonder, is the order of the day now. From every vantage point you will fill your phone’s backlit screen with glowing imagery, and there’s more than enough space to crop out other visitors and frame only yourself. 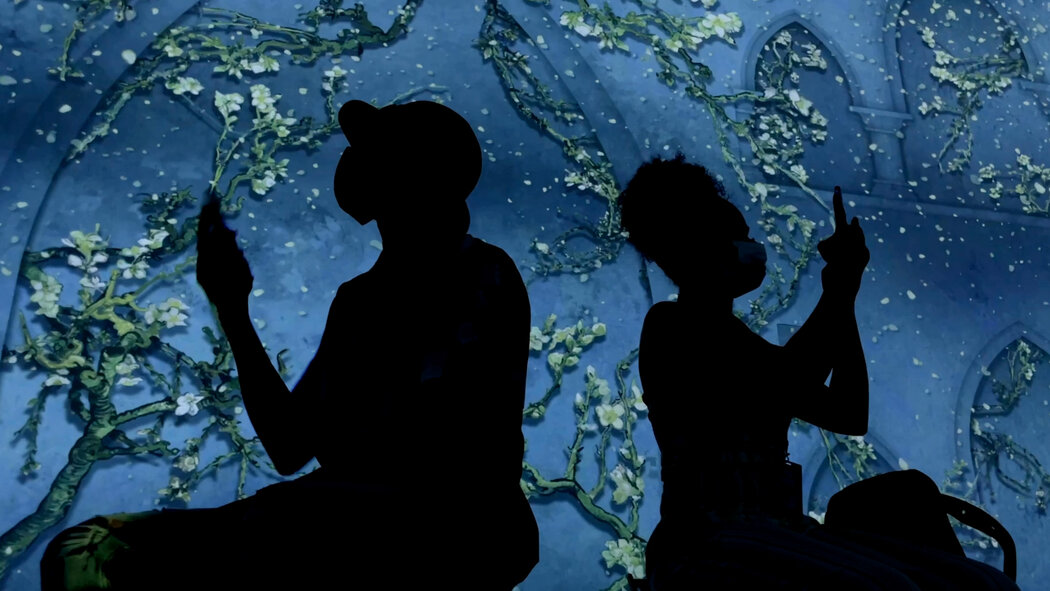 Is it all worth your hard-earned guilders? The east side immersion runs on a loop of about 35 minutes, the west side one about an hour. Not long for a ticket so pricey, but you can stay as long as you like, and both offer sideshows to boost your value. On the west side there’s a 3-D replica of van Gogh’s Arles bedroom, a coloring station for children, as well as a virtual reality experience that whisks you through a waxy simulation of Arles.

The east side show has booths rigged up with sounds associated with colored lights to suggest the chromesthesia van Gogh described in letters to his brother Theo, plus mannequins wearing shockingly tacky van Gogh-inspired clothing. (Where might these dresses festooned with wheat and sunflowers be appropriate? The Miss Provence pageant? Is there a Saint-Rémy drag night I don’t know about?) Also a bar with snacks sold “to Gogh,” which is a cute joke that only works in America — the French pronounce his name “van GOGUE,” the Dutch “fun KHOKH,” and Diane Keaton in “Manhattan” prefers “van GOKH,” the final consonant disdainfully ejected from the back of the throat. 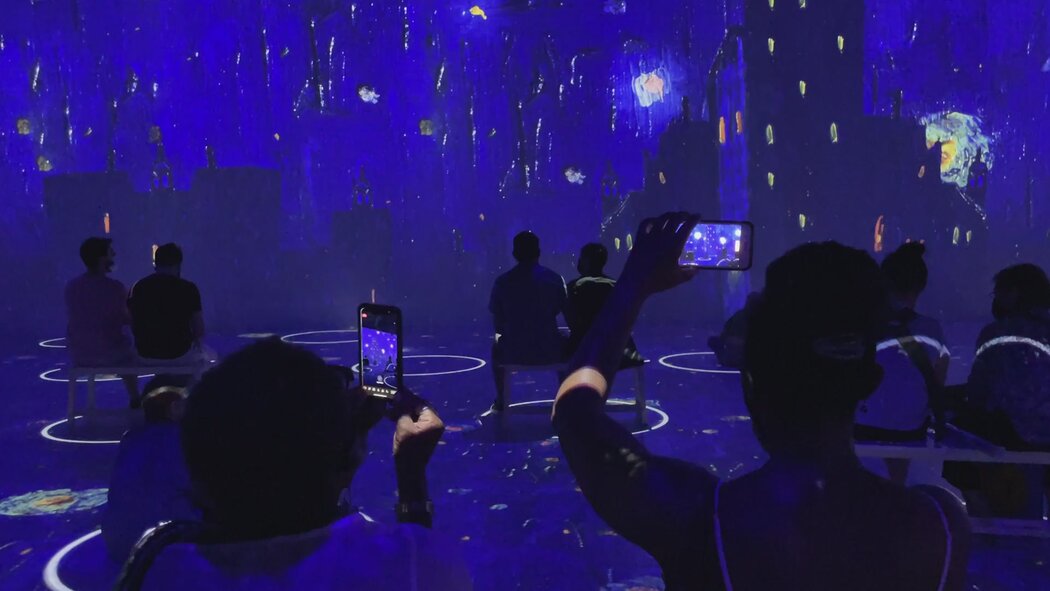 Keaton’s character in “Manhattan” has nominated van Gogh (alongside Ingmar Bergman and Gustav Mahler) for her “Academy of the Overrated,” and there is a shooting-fish-in-a-barrel version of this review that could end: painting is not spectacle, and van Gogh is more than decoration. Even this era’s most narcissist-friendly art installations — Yayoi Kusama’s “Infinity Rooms,” Random International’s “Rain Room,” or the all-engrossing environments of Miami’s Superblue — are at least original works, with a greater aim than artistic brand activation.

Still, after a few hours in these sensoria, I had to believe that the millions of visitors who enjoy these immersive van Gogh displays are getting something out of it. There’s a speechless and irreducible quality to great art, a value that goes beyond communication or advocacy. And if audiences find that quality more immediately here than they do in our traditional institutions, maybe we should be asking why.

Have our museums and galleries played down too much the emotional impact of the art they show? In the Metropolitan Museum of Art’s gallery 822, you can stand as long as you like in front of van Gogh’s “Wheat Field with Cypresses,” the agitated clouds rolling like waves, its climbing greenery edged with trembling blacks. I want everyone to discover, right there in the thick grooves of the oil paint, the wonder and vitality of art that needs no animation. There has got to be a way to lead people back to that discovery, even if some of us take a selfie afterward.