Stephanie Sheldon, the founder of The Cleveland Flea, a market that’s become a staple for the trendy, young, and hip in town, is trying to control major backlash, after she asked her Facebook followers for suggestions on how to make next year’s event better.

Multiple people — some vendors who’ve worked with Sheldon and other attendees and locals — told BuzzFeed News it all came to a head over now-deleted Facebook posts following years of tensions and grievances against Sheldon. They said that Sheldon knocked down suggestions on her post and was rude and unprofessional in her responses.

They say Sheldon was “mean,” “like Trump,” and has previously mistreated those she’s done business with. Others simply didn’t understand why she was curtly turning down things they said were genuine suggestions.

In response to the barrage of accusations and Facebook fallout, Sheldon told BuzzFeed News she received “mostly good and helpful feedback,” some that were “off-mark” and some she “felt like criticism for the sake of criticism.” 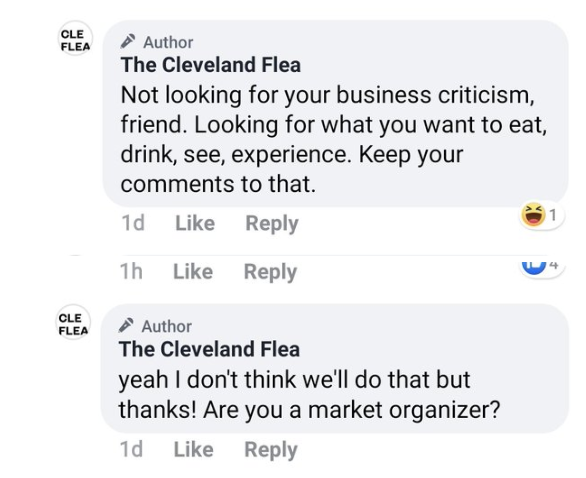 Last week, Sheldon posted to Facebook asking “what people would be excited to see at the markets when we return in 2021.” (She previously announced that she’s canceling the Cleveland Flea this year, saying it grew too fast and she wants to take a break to “dive into the bigger solution” of sustaining it.)

Multiple people told BuzzFeed News they saw, screenshotted, and engaged with Sheldon’s Facebook post at the time, adding that a handful of comments came in with “helpful” and “positive” suggestions, such as making the entry cost free, subsidizing costs with joint business collaborations, and making the entry application process easier for small businesses.

But they felt Sheldon was consistently shutting each comment down.

“When people responded in a respectful and thoughtful way, but with responses that Stephanie did not like or agree with, she responded with some very condescending and nasty comments,” Crystal, a local food blogger who wished only to go by her first name, told BuzzFeed News.

“All of the initial customer and vendor suggestions that I personally saw were not written in a mean-spirited way. They were not attacking her in any way. However, the comments became quite heated after Stephanie’s repeated unprofessional and mean responses to them.”

In one lengthy Facebook response to someone’s feedback, Sheldon wrote, “You’re NOT our boss. You are our co-collaborators and your job is to buy stuff and support your local businesses … Keep your business opinions to yourself.”

In another Facebook post, Sheldon seemingly wrote lengthy “RULES OF ENGAGEMENTS” where she listed rules of conduct for how she wanted people to engage with her and her posts.

Points she emphasized included reminding people that “this is a BRAVE space” and a “space for talking about the fun aspects” and “not a space to poke holes in a small business doing good.”

Sheldon told BuzzFeed News in an email that she responded to comments “with more emotion than I should have, and [she] regret[s] that.”

She said the hostility came from people who don’t work with her and who don’t understand how her business is run, and therefore their opinions are “not substantiated.”

“The main actors who are pushing this narrative comprise of people who have never been Flea vendors, have not made it through our application process, are associated with a competing Cleveland market, or performed poorly at the Flea while the other businesses around them killed it,” Sheldon said over email. “The claims this group made cannot be substantiated.”

A vendor who told BuzzFeed News she’s worked with Sheldon for more than five years at the Cleveland Flea said her conduct was “abrasive,” “defensive,” and “unprofessional.” She wanted to remain anonymous for fear of further backlash.

(Multiple people who shared their public grievances online ultimately turned down requests for on-record interviews from BuzzFeed News, citing fear of further retaliation from Sheldon or being blacklisted by her inner circle in Cleveland.)

“She’s very polarizing, she reminds me and a lot of people like Trump,” the vendor said. “She doesn’t embody his perspective — as far as immigration, social justice, xenophobia — but definitely embodies his tactics, just being very brash.”

She went on to say that the Facebook drama was not an isolated incident, but just something that’s happened in public for the first time after years of similar behavior she’s experienced in their business dealings.

She also said that Sheldon had made her and other vendors feel disposable and easily replaceable at the Cleveland Flea. 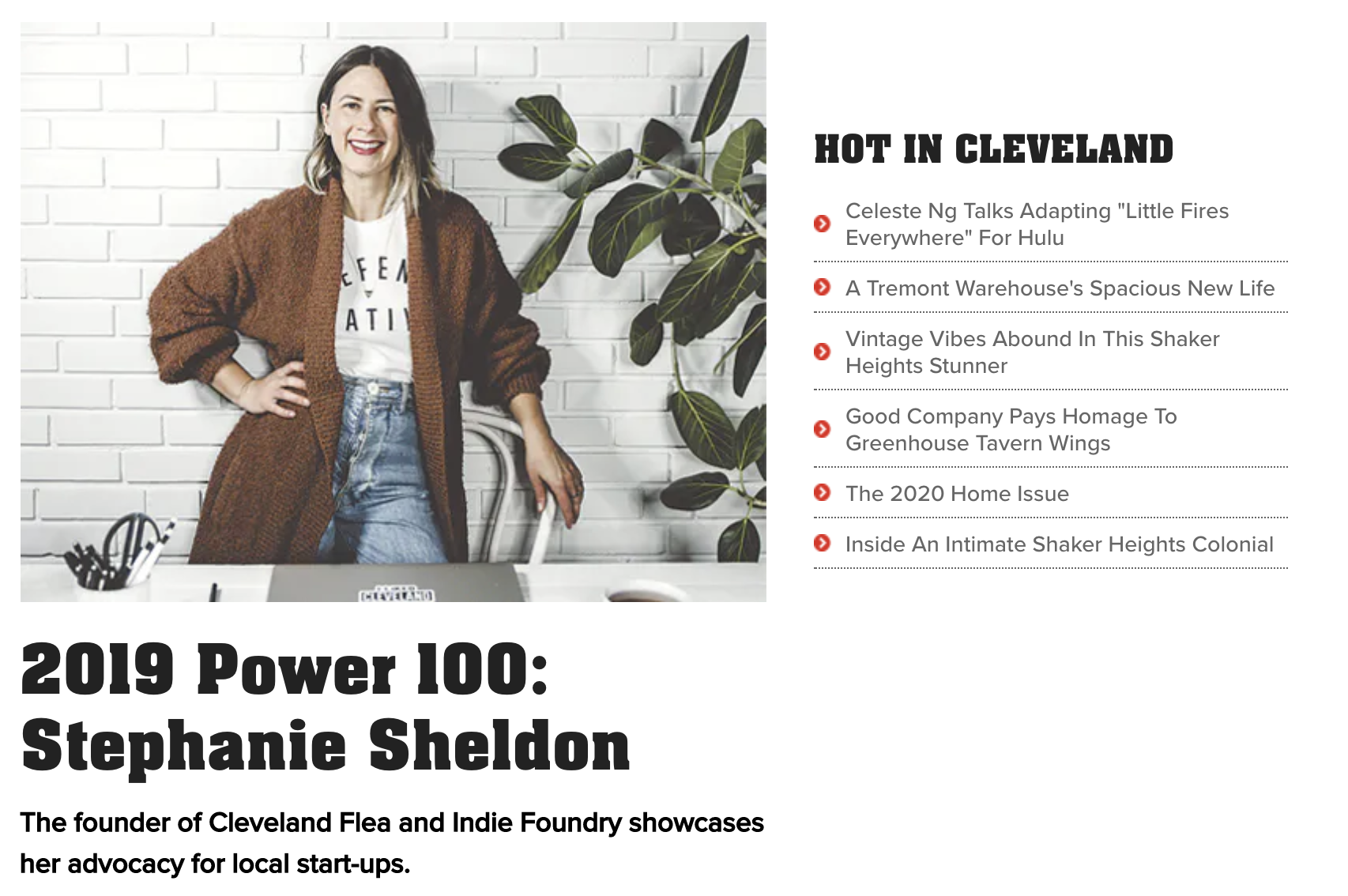 Another small business owner, who requested she remained anonymous, described her working relationship with Sheldon as “not positive,” and left it at that.

She told BuzzFeed News she’s just shocked it took this long for it all to be aired out.

“I’m surprised it took this long for other people to realize what many businesses here have known about her for years,” she said.

Sheldon said she pulled the Facebook post down to “prevent it from escalating,” but the drama followed her to the comments of another business she launched called Kind Cleveland — “a platform dedicated to providing uplifting stories of kindness,” she described it.

The group is currently private. According to screenshots provided by those following the Instagram page, the back-and-forth between critics and Sheldon have been unkind.

Sheldon maintains that she has an overall “great” and “happy” relationship with the local businesses around her.

“We have great relationships with a wide majority of our vendors, and we’re happy to put in the work for them and their businesses because a successful market is one where everyone wins,” she said.

“Thank you for all of your support,” she added.

Of the five sources BuzzFeed News spoke to about their experiences with the flea, they said they mostly want Sheldon to take some personal accountability for the social media debacle that unfolded over the past week.

“I hope that she is able to see how her actions caused the implosion of her brand and learn how to use social media appropriately,” Crystal, the food blogger, said. “I only started talking about this because what I was seeing was so egregious that I felt a conversation about it was necessary.”

They aren’t sure what the future of Cleveland Flea could look like. Some said they still look forward to attending, but others are conflicted about what and whom they might be supporting.

The business owners whose businesses depend on Sheldon’s work at the flea told BuzzFeed News they hope to see the events be more about the community, and featuring work of local vendors.

“By the end of it, the Cleveland Flea became a giant Instagram selfie — a place where bloggers and influencers want to go to drink and eat lemonade out of a mason jar, and take a selfie in front of a cool flower wall,” the vendor told BuzzFeed News.

“I don’t think the Flea can gloss over what’s happened here and come back as if nothing happened,” the small business owner said of Sheldon. “I hope she can finally realize that other people are entitled to their opinions, experiences, and feelings, and that expressing them shouldn’t automatically be considered a personal attack, especially when they have been asked for feedback.”

“If she can’t separate her own identity from her business maybe it’s time to let that part of her business go and concentrate on something else.”