AMC series The Walking Dead returned to screen this week with more shocks and twists then you could shake a barbed-wire covered baseball bat at. The midseason premiere picked up with the survivors battling Walkers while trapped in a cave. There were also sinister scenes as Negan (played by Jeffrey Dean Morgan) continued to infiltrate Alpha (Samantha Morton) and the Whisperers’ camp.

Fans were left shocked this week as The Walking Dead featured a sex scene between Alpha and Negan – a rare moment for the horror series which is more preoccupied with zombies invasions than romance.

However, the episode saw Alpha and Negan sleeping together after he convinced the leader of the Whisperers her lieutenant Gamma (Thora Birch) was a spy.

Alpha seemed to believe Negan and gave him an apt reward as she perceived it.

She instructed him to strip in the middle of the woods before getting naked herself and approaching him – apart from wearing her mask made of human flesh. 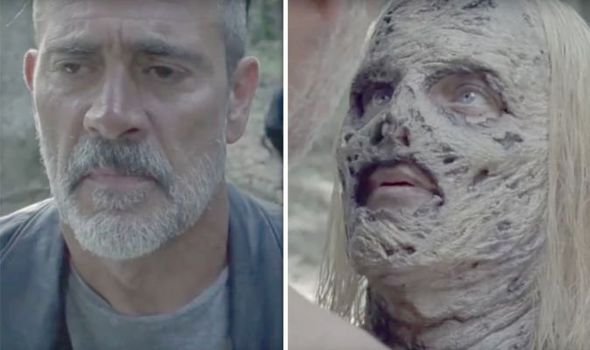 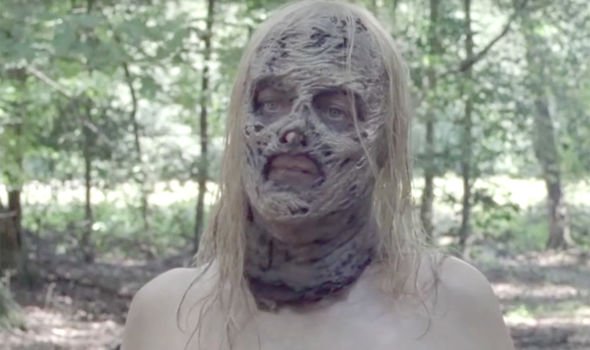 Alpha told him: “You’re a crass man. I reckoned you might appreciate a crass reward.”

Negan was as stumped as audiences at home when Alpha explained he was “right” about Gamma.

She continued: “It took courage to do what you did and I want to express my gratitude to you in a way that you will understand.”

While the moment was a sinister and grim one for The Walking Dead, it could be foreshadowing a major death. 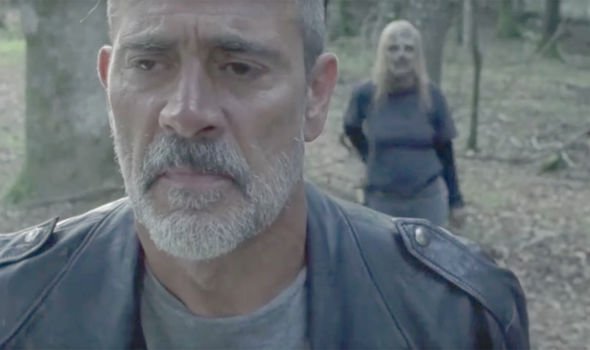 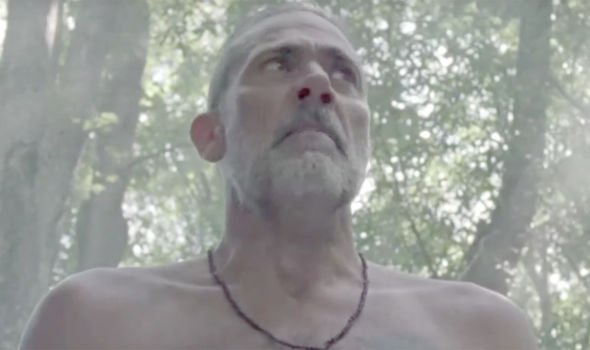 As Negan and Alpha were about to kiss, he asked whether she would be killing him after they had sex.

“Wait, wait, this isn’t some sort of a praying mantis situation, is it? Cut off my head afterwards?” Negan asked.

He was met with silence, leading him to comment: “I’m sorry, I can’t help but notice you didn’t say no to that.”

But then changed his tact: “You know what, it’s been a long time, I reckon I will take my chances.”

The scene suggests Alpha could be the one to kill Negan at some point in the future.

In the comics, Negan decapitates Alpha and takes her head back to survivors to prove whose side he’s really on.

But could the TV show invert this plot point and see her killing him off?

AMC’s version of The Walking Dead has taken a different direction to the source material with characters killed off who are still alive in the Robert Kirkman comics and vice-versa.

Then again, this could be a double bluff and instead foreshadow Alpha’s own demise as Negan gets ready to betray her.

The nude scene between Alpha and Negan itself wasn’t in the comics and their sexual relationship in the show will add another layer to their dynamic.

Actor Norman Reedus – who is better known as Daryl Dixon – has opened up about the moment he read the Alpha and Negan scene.

He told Entertainment Weekly: “I do remember when that was written and I was like, ‘Jeff!’ And he’s like, ‘What? What? Samantha doesn’t want to get naked so I don’t really have to get naked.’

“And I’m like, ‘That’s not what I heard. I heard Samantha wants to but you don’t want to.’ And he’s like, ‘Well no, you know, I’d….’ He was just stumbling on his words and I was like, ‘You know what? I’ve been butt naked on this show several times in front of everybody!’

“And he ends up wearing this like flesh colored [sic] ballerina bottoms and these ballet bottoms! And not only that, then he’s got like a beige colored [sic] diaper on top of that. You can’t see anything!

“And I was like, this is so unfair! I was like, ‘You chicken, get in there, rip those pants off!’ But he wouldn’t do it. I think me and Cudlitz are the only one that have been naked so far on this show.”