The pianist Vijay Iyer composed the title track to his new trio album, “Uneasy,” back in 2011 for a collaboration with the dancer and choreographer Karole Armitage. It was still a few years before the 2016 presidential campaign, when so many of the country’s old wounds and resentments would burst onto public display, but he already felt some undercurrents stirring.

“It was 10 years after 9/11, and having been in New York for all that time, any kind of moment of relative peace felt precarious,” he said recently by phone from his home in Harlem. “I’m speaking not just about the attack itself, but all of the aftermath: the blowback, the backlash against communities of color, the atmosphere of surveillance and fear.”

“It was the Obama years, so there was a certain kind of exuberance about possibility, and there was also a kind of unease,” he added. “It was a time of the Affordable Care Act and of drone warfare, gay marriage and mass deportations.” With digital surveillance becoming a fact of life, he was struck, as an American-born artist of South Asian descent, by the feeling “that this thing Americans love to call freedom is not what it appears to be,” he said.

Another decade has now passed, and the version of “Uneasy” that appears on the album, out Friday, seems to be carrying a mix of heavy thought and rich optimism — a typical blend in Iyer’s work. He’s joined by two slightly younger musicians with sizable followings of their own, Linda May Han Oh on bass and Tyshawn Sorey on drums. As improvisers, they’ve got a few things in common: the ability to play with a lithe range of motion and resplendent clarity, in the style of well-schooled jazz musicians, while stoking a kind of writhing internal tension. Crucial to that balance is their ability to connect with each other in real time, almost telepathically.

The title track unfolds ominously over more than nine minutes, starting off in a dark cloud of doubt, with Iyer’s low piano repetitions hovering around a slow, odd-metered pattern. Later, the group upshifts — abruptly, but without totally losing its cohesion — into a quicker, charging section with a wholly different rhythm, Iyer’s right hand darting in evasive gestures while Oh holds down the scaffolding and Sorey adds action and sizzle.

The trio first came together in 2014 at the Banff International Workshop in Jazz and Creative Music, where Iyer, now 49, and Sorey, now 40, serve as artistic directors. The two have been collaborating since 2001, when Sorey wowed Iyer at a rehearsal. During a break, Sorey started casually noodling on the piano, and Iyer soon realized he was playing an excerpt from Iyer’s most recent album. It wasn’t even from the song’s melody; it was part of Iyer’s improvised solo on the recording.

“He was just this 20-year-old,” Iyer said. “So I already knew, like, oh, this is a bona fide genius right here.” (Indeed, in the years since, both Iyer and Sorey — who is now as well known for his long-form compositions as he is for his drumming — have been awarded MacArthur “genius” grants. They have also both become professors of music at Ivy League institutions.) Sorey joined the collective trio Fieldwork, with Iyer and the saxophonist Steve Lehman, and their partnership blossomed.

In 2013, Iyer took over as artistic director at Banff — a creative enclave in Alberta, Canada, where students gather every year for a three-week improvisation workshop — and he found himself inviting Sorey to teach alongside him each year. Eventually, he formalized their relationship as a partnership, welcoming Sorey as his co-director.

Oh, 36, had collaborated here and there with both Iyer and Sorey before also becoming a regular instructor at Banff. She said she appreciated the fluidity of the divide between instructors and students that the workshop fostered. Speaking by phone from her home in Australia, Oh recalled the poetry of how Iyer encouraged students to think about the notes they played on their instrument in relationship to the range of their own speaking voice.

Playing Iyer’s compositions, she said, can be like working out “beautiful little puzzles,” and she called Sorey an ideal teammate.

“It’s a lot of fun to tread that line between what is inbuilt in that structure and what we can sort of dialogue on, and have a conversation over that,” she said. Sorey is “so thorough with the inbuilt things in the composition, but he’ll create these sparks that you really don’t expect,” she continued. “It’s just constant energetic dialogue.”

Oh also has a knack for establishing sturdy foundations without sinking into a pattern. Playing together, she said, “We can be reactive and proactive at the same time.” 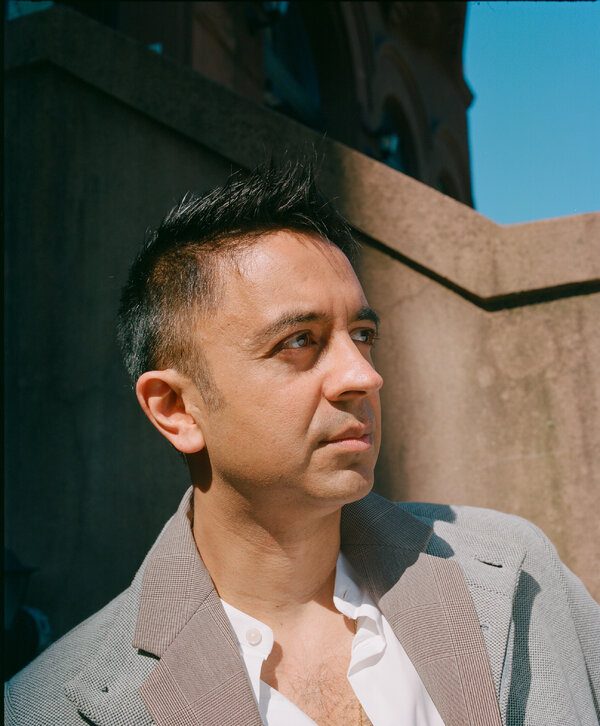 Iyer was quick to emphasize the importance of Sorey’s supportive style, calling it remarkable for an artist who has so much to say on his own terms. He described starting to nod toward one song in the middle of playing another, maybe just flicking at a phrase, and then feeling Sorey immediately dive into it, anticipating his next move, as if to catch him. “Because he hears everything, it means we can just do anything,” Iyer said.

In an interview, Sorey said he always felt “most at home in situations where it’s only three players,” describing this particular trio as “basically one organism.”

“That feeling of intimacy leads to a certain type of trust where there can be no wrong done,” he said.

The group entered the studio in 2019, but Iyer didn’t cull the tracks they’d recorded into an album until the following year, when the name “Uneasy” felt even more painfully apt. “It was under the conditions of the hell that was 2020: tragedy and loss and the political battle of the century,” he said. “Then, on the other hand, an incredible uprising of, particularly, young people fighting for justice for Black people, and for everybody. That is imagining a future.”

Some of the song titles speak to this theme: “Children of Flint” refers to the water crisis in Michigan; “Combat Breathing” was composed in 2014 in solidarity with Black Lives Matter activists, and presented as part of a “die-in” at the Brooklyn Academy of Music. But so do the sounds themselves — tetchy and bristling, while evincing an inspiring level of unity and compassion.

When it came time to choose the cover art for the album, Iyer rejected nearly a dozen suggestions from Manfred Eicher, the head of ECM Records, before settling on a black-and-white double-exposure by the Korean photographer Woong Chul An. It shows the Statue of Liberty, blurry and gray, seemingly caught between the clouds in the sky and another puff of clouds hanging just above the sea.

“When I saw it, I didn’t know how to feel about it,” Iyer said. “For one thing, what does it mean for me to have this on my album cover? What does this even represent?”

Ultimately, he was attracted to the hazy ambivalence that the image conveys. “This one is a distant image of the Statue of Liberty, not as this looming prideful symbol but as almost what looks like this rejected figure,” he said, pointing to the fact that France had offered the statue to the United States in celebration of the end of chattel slavery here.

“As this symbol tends to represent freedom in America, it is also tied to abolition,” he said. “So the fact that those concepts are bound is, I felt, important to highlight. They seemed to sit in an uneasy relation to one another, freedom and its opposite.”