Two Black teenagers in a Mercedes-Benz are pulled over by the police.

One, having grown up in West Philadelphia, has the wary look of someone who knows exactly how the situation will unfold. He gets out of the car and flops down on the hood, arms spread, while his sheltered, wealthy cousin from Bel-Air looks on, dumbfounded.

The scene, which played to howls of studio-audience laughter in a 1990 episode of “The Fresh Prince of Bel-Air,” portrayed a scenario that was all too familiar to many people of color: being racially profiled by the police.

Thirty years later, after mass demonstrations thrust the issues of racial injustice and police brutality to the forefront of the national debate, the show is being remade as a drama for Peacock, NBCUniversal’s streaming service, and the original cast will reunite for a special that arrives on HBO Max on Thursday.

A look back at the original “Fresh Prince” and other sitcoms of its era that focused on the lives of Black Americans shows how, even within confines of the three-camera format, these programs explored complicated issues of racial injustice, often in ways that walked a fine line between comedy and tragedy.

“We were funnier the more real we were,” said Jasmine Guy, who played a spoiled Southerner on “A Different World,” a spinoff of “The Cosby Show” that ran from 1987 to 1993 and focused on students at Hillman, a fictional historically Black college.

“Blacks have always had the challenge of playing the role of the jester where humor is used as protection against salient truths the king’s court tends to ignore,” he said.

‘I feel seen and I feel heard’

Morgan Cooper, 28, was in the second grade when he first saw the racial profiling scene in a rerun of “The Fresh Prince.” It was around the same time that his father told him how to react if they were ever stopped by the police.

For a Black boy growing up in Kansas City, Mo., the episode was revelatory, he said.

“I feel seen and I feel heard through this family,” he recalled thinking. “Though ‘Fresh Prince’ was a 30-minute sitcom, it was still planting seeds. It really used comedy as a Trojan Horse into these ideas.”

In 2019, Mr. Cooper filmed a three-and-a-half-minute trailer that reimagined the sitcom as a drama called “Bel-Air,” with the principal character, Will, being sent to live with his rich uncle and aunt after he is caught with a gun. Mr. Cooper released it on YouTube, where it has been viewed nearly 6.7 million times.

The trailer got the attention of Will Smith, who played Will in the original series. He helped Mr. Cooper secure a two-season deal for “Bel-Air” on Peacock. Both men are now executive producers of the new show.

When “The Fresh Prince” premiered in 1991, networks, encouraged by the success of “The Cosby Show” and the rise of hip-hop, were investing in sitcoms featuring Black actors.

The 1990s “represents a moment in television history where you see the introduction of perhaps the greatest or largest number of Black situation comedies to ever be offered up,” said Robin Means Coleman, a professor who specializes in media, culture and identity at Texas A&M University.

But the shows varied in how they tackled racial tension, if they tackled it all. “The Cosby Show,” for example, steered largely clear of the subject.

In its first season, “A Different World” continued that tradition, featuring conventional plots like one episode in which students carried an egg in a basket to learn about parental responsibility.

Then Debbie Allen took over as director and the show began exploring more serious topics. “We dealt with everything,” Ms. Allen said. “We dealt with date rape, racism, the L.A. riots.”

“A Different World” became so well known for its social awareness that it was parodied on the sketch comedy show “In Living Color.”

But there were still limitations.

Ms. Allen said she was not allowed to show a condom an episode about AIDS. And Ms. Guy recalled that the network remained reluctant to air that episode even after Whoopi Goldberg and Tisha Campbell, who had appeared in “School Daze” and “Little Shop of Horrors,” agreed to guest star in it. “It always felt like we were so behind and they weren’t letting us free,” she said.

Cree Summer, who played the free-spirited Freddie on the show, said there “was a time where the censorship went very deep on these sitcoms.” Marveling at Ms. Allen’s determination, she added, “I don’t know how in the hell she got away with it.”

Even the most racially conscious shows maintained a bright outlook that fit the optimistic, glossy tone of the 1990s.

There was no social media to give near daily reminders of racial injustice, said Daphne Maxwell Reid, who played Vivian, the matriarch on “The Fresh Prince,” from 1993 to 1996.

“We were innocent,” Ms. Reid said. “The economy was just chugging along. People were going about their growth and their lives in a more innocent way. They weren’t worried about the death of democracy.” 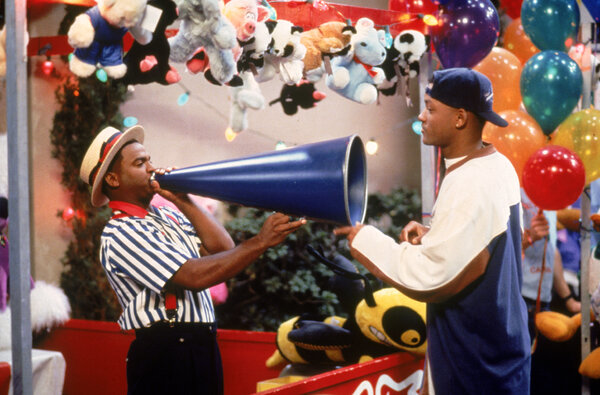 So when the shows did confront hard topics, the effect was that much more dramatic, Mr. Cooper said.

“Family Matters,” a softhearted ABC series about a working-class Black family in Chicago, was known more for the antics of the buffoonish character Steve Urkel than for its take on racial politics.

But in 1994, the show aired “Good Cop, Bad Cop,” in which Sergeant Carl Winslow, played by Reginald VelJohnson, confronts two white officers who stopped his son, Eddie, while he was driving.

The episode was written after the actor who played Eddie, Darius McCrary, told the producers he had been racially profiled while driving.

“The writers always had their hand on the pulse of America and society,” Mr. VelJohnson said. “I applaud them for their bravery and good sense to write an episode like that.”

A ‘Damning Referendum’ on Hollywood

The promise that those early ’90s shows would usher in a new and permanent era of programs with largely Black casts had largely fizzled by the early 2000s.

By then, “The Cosby Show,” “A Different World,” “Family Matters” and “Fresh Prince” had all ended their network runs. UPN and WB, two networks that featured shows with Black casts, stopped broadcasting by the mid-2000s.

More recently, shows like “Atlanta,” “Blackish” and “Insecure” have centered their plots around the lives of Black families and young professionals as they contend with gentrification, preferences over skin tone, racially insensitive colleagues and police brutality.

But even those successes come with caveats. “Insecure,” an HBO comedy about a 20-something trying to navigate love and her career in Los Angeles, came about after its creator, Issa Rae, broke through on YouTube, Professor Gooding said.

Mr. Cooper, the creator of “Bel-Air,” used the same medium to get attention from the industry, Professor Gooding said.

“It’s a damning referendum on how difficult it is to penetrate the Hollywood system,” he said.

Ms. Summer, the “Different World” actress, says she still sees too many Black actors playing supporting parts, rather than leads. “I need a reflection of me,” she said, “not the white girl’s best friend.”