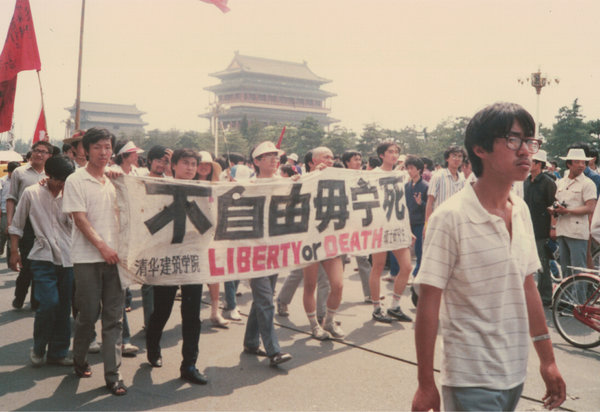 TIANANMEN: THE PEOPLE VERSUS THE PARTY (2019) 9 p.m. on PBS (check local listings). Earlier this month thousands of Hong Kong residents began marching against a bill that would allow extraditions to the mainland. The timing of the demonstrations makes them ever more potent: This month marks the 30th anniversary of the Tiananmen Square massacre, when Chinese troops unleashed their firepower on a throng of protesters in Beijing who were calling for democracy in the Communist country. This new documentary revisits the seven weeks that led up to the killings and maps out how a peaceful, student-led movement ended in unthinkable carnage. The director Ian MacMillan weaves archival footage with testimony from protesters, witnesses and Communist Party insiders who watched the tragedy unfold.

MIKE EPPS: ONLY ONE MIKE (2019) Stream on Netflix. Throughout his 20 years in entertainment, Mike Epps (“Next Friday,” “How High”) has usually appeared on the sidelines playing goofy secondary characters. But when it comes to comedy, he steals the show. In this new special, the actor and comic performs in front of a packed house in Washington, delivering salacious one-liners (some more juvenile than others) and ruminating on relationships and family. One moment he’s flashing a toothy smile and explaining how old age can slow down a man’s sex drive. The next he’s recalling how his daughter’s boyfriend won him over (it involved some potent weed).

MY BEAUTIFUL LAUNDRETTE (1986) Stream on the Criterion Channel; rent on Amazon, iTunes or Vudu. This beloved dramedy, directed by Stephen Frears, tackles homophobia, racism and sociopolitical inequality with one too many subplots. But the thread that holds it together is the impenetrable romance between Omar (Gordon Warnecke), a young Pakistani man in South London, and Johnny (Daniel Day-Lewis), a childhood friend who grew up to be a street punk. After his uncle asks him to take over a rundown laundromat, Omar crosses paths with Johnny and enlists his help. The two transform the dirty establishment into a glamorous one, rekindle their spark and get caught up in a drug deal along the way. Writing in The New York Times, Vincent Canby called the movie a “rude, wise, vivid social comedy.” He added: “‘My Beautiful Laundrette’ has the broad scope and the easy pace that one associates with our best theatrical films.”

DAMNED Stream on Britbox. Before Himesh Patel landed the lead role in the upcoming Beatles movie “Yesterday” (opening Friday), he co-starred in this British workplace sitcom about social workers who focus on children services. The show deftly balances its weighty subject material — some cases involve student-teacher relationships, missing teenagers and prostitution — with a hilarious portrayal of humdrum work life akin to that of “The Office.” “Damned” only ran on Channel 4 for two seasons, but critics gave it a thumbs up: The Telegraph called it “unforgiving, warm and extremely funny.”