The ongoing coronavirus pandemic and stay-at-home orders have dramatically altered the entertainment industry. Movie theaters are closed; films are on hold, and television networks are scrambling behind the scenes to reconfigure summer and fall programming amid production shutdowns.

From January to March, the Big Five broadcasters — CBS, NBC, Fox, ABC and The CW — are usually focused on producing and shooting TV pilots, viewing them and deciding which ones to order to series. Some pilots were in production or about to gear up when quarantine orders hit in March, completely halting the expected sequence of events. Sets were closed, some crew members were furloughed and actors were sent home.

Now — when yearly upfront presentations would normally take place — networks are instead deciding whether to move forward with or completely scrap prospective shows, despite having barely any other finished product to consider. Some networks are requesting more scripts and approving straight-to-series orders, while others are delaying summer releases so they can be used as fresh content in the fall.

Network officials know that production might be suspended for the foreseeable future. And even when sets open back up, they will most likely never be the same.

“It’s just in a holding pattern until we can start shooting and figuring out how we can do it safely and effectively while also keeping the integrity of a story,” a representative for one of the major networks, who was not authorized to speak officially, told HuffPost. “How do you shoot, say, a romantic scene between two people or a scene where two people have to be in close proximity with each other? Now you really can’t. So it’s a much larger issue of what is storytelling going to be like on screen?” 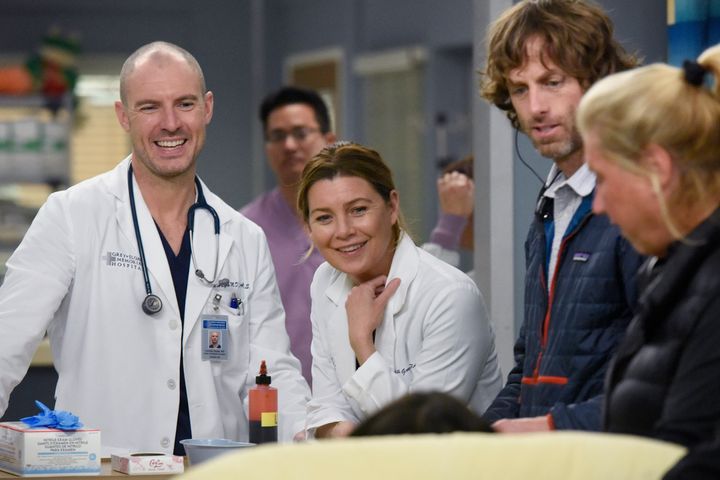 When sets shuttered, the seasons of a few shows came to an abrupt end. Most scripted series were able to air some sort of finale in April, but a handful of those episodes weren’t meant to be closers.

AMC’s “The Walking Dead” had to end with its lackluster penultimate episode, which left many unanswered questions. NBC’s “New Amsterdam” went off the air three episodes early after deciding to hold a flu pandemic-themed storyline. And despite having four more installments to shoot, ABC’s “Grey’s Anatomy” ended its 16th season on episode 21.

In terms of series finales, ABC’s “Modern Family,” NBC’s “Will & Grace” and CBS’s “Hawaii Five-0″ were all able to air proper conclusions. But Fox’s “Empire” had to shut down three weeks ahead of schedule and wrapped two episodes short.

The CW’s “Supernatural,” meanwhile, wasn’t able to complete episodes 18 and 19 of its 15th and final season, and the network aired only 13 episodes of a planned 20. The network intends to air the series’ final seven episodes in the fall, once production resumes.

Reality shows, especially live competition series, had to get creative with their wrap-ups.

NBC’s “The Voice” and ABC’s “American Idol” went virtual, with contestants performing songs from their homes and mentors judging remotely. Andy Cohen moderated a “Real Housewives of Atlanta” reunion over video chat for Bravo. And CBS’s “Survivor” had to end its big 40th anniversary season, “Winners at War,” with a Zoom vote read from host Jeff Probst’s garage, which resulted in Tony Vlachos being crowned the Greatest of the Greats.

“The Zoom call with the final three was very intimate because it was just the four of us, and I had an iPad counting down how many seconds were left in the show,” Probst told Entertainment Weekly. “But I really felt for them because they could not feel the love that I know they would have felt if we had been live in Los Angeles.”

The Fate Of Fall TV

Right now, there’s plenty of new TV content, especially on streaming platforms such as Netflix (“Unbreakable Kimmy Schmidt: Kimmy vs. the Reverend,” “Dead to Me”)  and Hulu (“Normal People,” “The Great”) and premium channels such as HBO (“I Know This Much Is True”) and Showtime (“Billions”).

But the Big Five networks usually slow down in the summer season ― airing a few scripted series, reality programs or sporting events (sorry, NBC) ― before picking up again in the fall with their tried-and-trues and those aforementioned new series. With no clue when productions will resume, scheduling has become tricky.

“What you’re going to see across broadcast is a lot of the shows that you typically see in the fall will end up being shifted to midseason because they just simply can’t be produced in time,” the network representative told HuffPost. The rep added that shows originally intended to premiere in the summer months might be pushed to September or October to guarantee fresh content for audiences.

Fox is saving its psychological thriller “Next” (with John Slattery) and the Southern Gothic soap “Filthy Rich” (with Kim Cattrall) for fall premieres, alongside “The Masked Singer,” “MasterChef Junior” and the network debut of the police drama “L.A.’s Finest,” starring Gabrielle Union and Jessica Alba. (That show originally ran on Spectrum last year.)

Fox will also have new seasons of animated series “The Simpsons,” “Bless the Harts,” “Bob’s Burgers” and “Family Guy,” all of which can be produced efficiently from home.

“Animation has a little bit less exposure compared to live-action programming, simply because you don’t need as many human beings in one place to put those together,” the network representative said. “There’s no set. There’s no art direction. There are no props. There are just animators, writers, producers and talent. A lot can be done remotely via computer for animators, and the talent can go in one by one to studios or, frankly, can do their lines from home.”

CBS announced the return of 23 series last week and ordered three new series: the “Silence of the Lambs” spinoff, “Clarice”; the Queen Latifah-fronted “The Equalizer”; and Chuck Lorre’s comedy “B Positive.” (The pilot for “B Positive” has already been shot, CBS tells HuffPost.)

The CW ordered new series “Superman & Lois,” “Walker,” “Kung Fu” and “The Republic of Sarah.” All will debut — along with new seasons of the network’s existing shows — in January 2021. The CW’s fall season will consist of acquired scripted series such as “Tell Me a Story” and alternative programming, including “Masters of Illusion.”

“As we manage the current crisis, we’ve developed a methodical programming strategy for this year and well into next that we believe works for The CW, our advertisers, affiliates and audience while keeping the health and safety of our productions and creative partners front of mind,” Mark Pedowitz, chairman and CEO of The CW, said in a statement Thursday.

ABC and NBC have yet to announce fall slates. 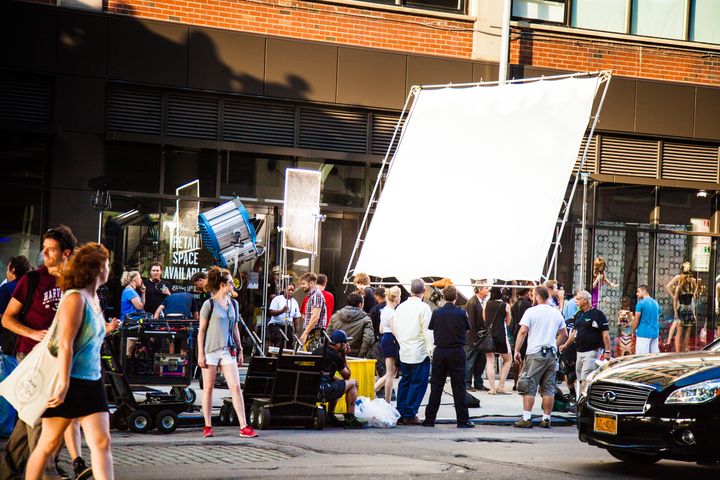 An Unknown Future For Production

Despite plans, it’s hard to imagine how productions will even reopen post-pandemic. Most TV sets consist of dozens, sometimes hundreds, of crew members working together in confined quarters for a long period of time. Considering the infection rate of  COVID-19, being a gaffer or a boom operator or a camera assistant on a crowded soundstage is a dangerous job to take on.

Writers can’t really meet in person or in big groups. Camera operators and focus pullers might not want to stand too close to one another. Hair and makeup artists probably don’t want to hover over talent.

And what about food service? How will hundreds of people crowd around picnic tables and quickly shovel lunch into their mouths before setting up another scene?

“Craft services will need to be revamped. No more buffets or communal snacks; rather, meals will be individually prewrapped and will be taken at staggered schedule times,” Carolyn Hunt, a partner in the entertainment, media and sports practice group at the law firm of Barnes & Thornburg, told HuffPost. “And office and bathrooms will not have doorknobs or handles that require hand touch; they will be swinging instead. As in all other businesses opening up in this environment, constant sanitization and disinfection of all areas will be required, so many surfaces will be changed to make disinfection easier, such as replacing director’s chairs with plastic chairs.”

Closed sets will become the norm, according to Steve Weizenecker and Scott Witlin, who are partners at the firm. People will interact directly only when necessary, such as actors performing a scene.

Face masks and social distancing practices will continue, with crew members working in pods to manage the spread of coronavirus should someone get sick. (“Contact tracing will be noted and recorded,” Weizenecker said.) Individual transportation to and from set will be encouraged, and on-set medics will be readily available.

Will productions will ramp up anytime soon? Hunt assured HuffPost that some sets are already opening up overseas and that Film Florida and the Georgia Film Office have circulated guidelines for a safe return to work.

“It is unlikely that sets will ever return ‘to normal,’ though,” Hunt said. “Even if COVID-19 gets under control, no one will soon forget the overwhelming effects that a strong virus can have on business, so concerns about contagion will likely result in many new practices becoming permanent.”

If the shows that networks hope to run can’t get made, the fall TV season is going to look very different. Perhaps there will be more virtual reality programs — or maybe even reruns. But creativity blossoms in the film and TV industry, so audiences will be given some sort of content to devour ― even if it’s more video chat cast reunions or quarantine romance shows.