This is Please Like Me, BuzzFeed News’ newsletter about how influencers are battling for your attention. You can sign up here.

Emma Chamberlain has been accused of “scamming” fans with her new coffee product. See also: social media’s changing and liberal use of “scamming.” 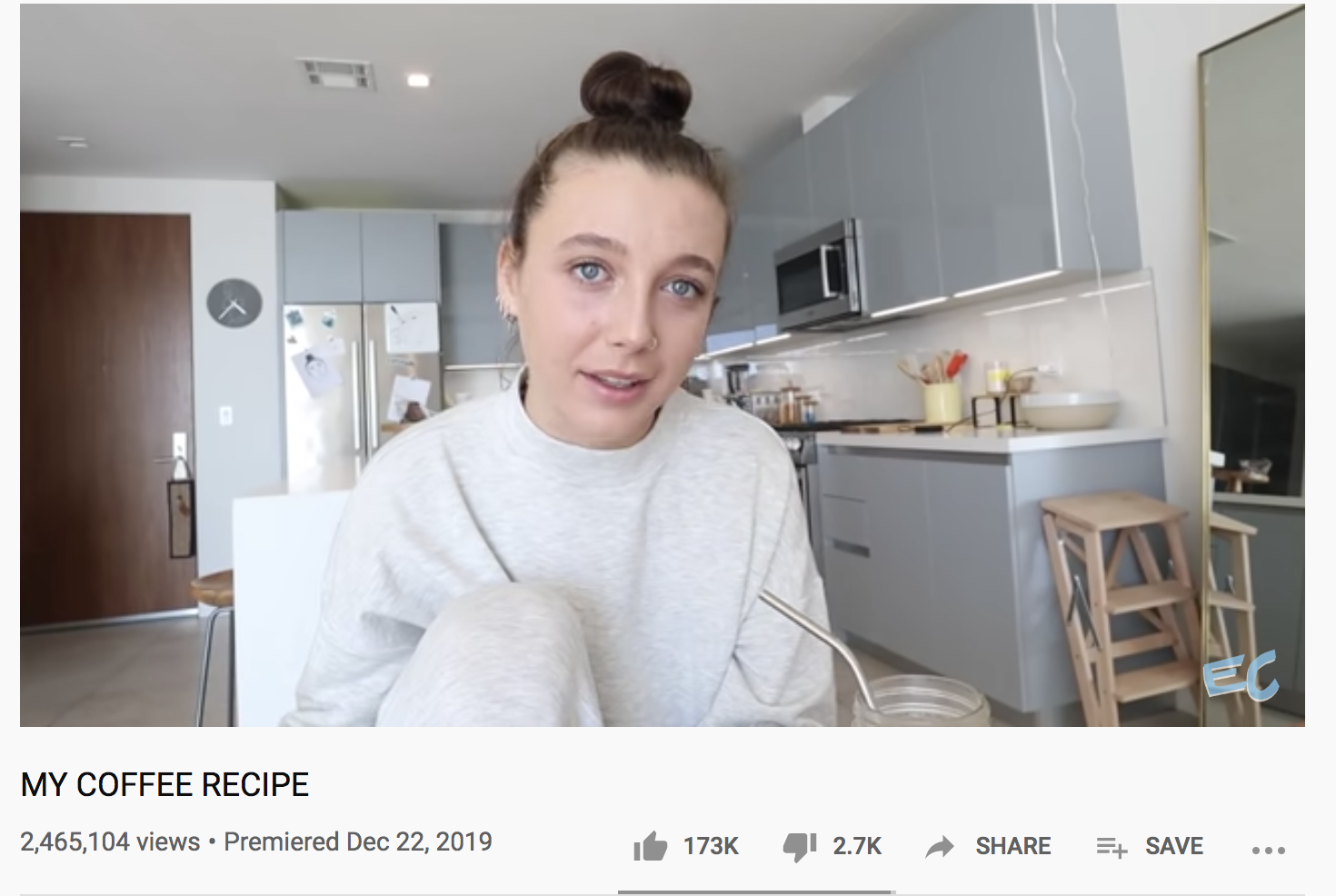 Anyway, Emma, an 18-year-old professional vlogger who broadcasts her life to 8.5 million fans, announced the new product she’s selling last week. Called Chamberlain Coffee, it’s a line of tea bags, filled with coffee grounds, that are meant to be steeped. A 30-pack is currently being sold for $60.

“I’ve always struggled to make good coffee at home,” Emma says in her advertorial vlog. “My goal with this is to give everyone a way to make coffee easily that actually tastes good.”

Chamberlain Coffee is not one of a kind, but it’s a fun product for a huge social media star who’s made her love for coffee a big part of her personality. However, some are accusing her of overcharging for what Cardi B would probably consider just regular, degular, shmegular coffee.

Tea-spilling (heh) and commentator Youtube channels even uploaded videos asking whether or not the coffee was a scam. 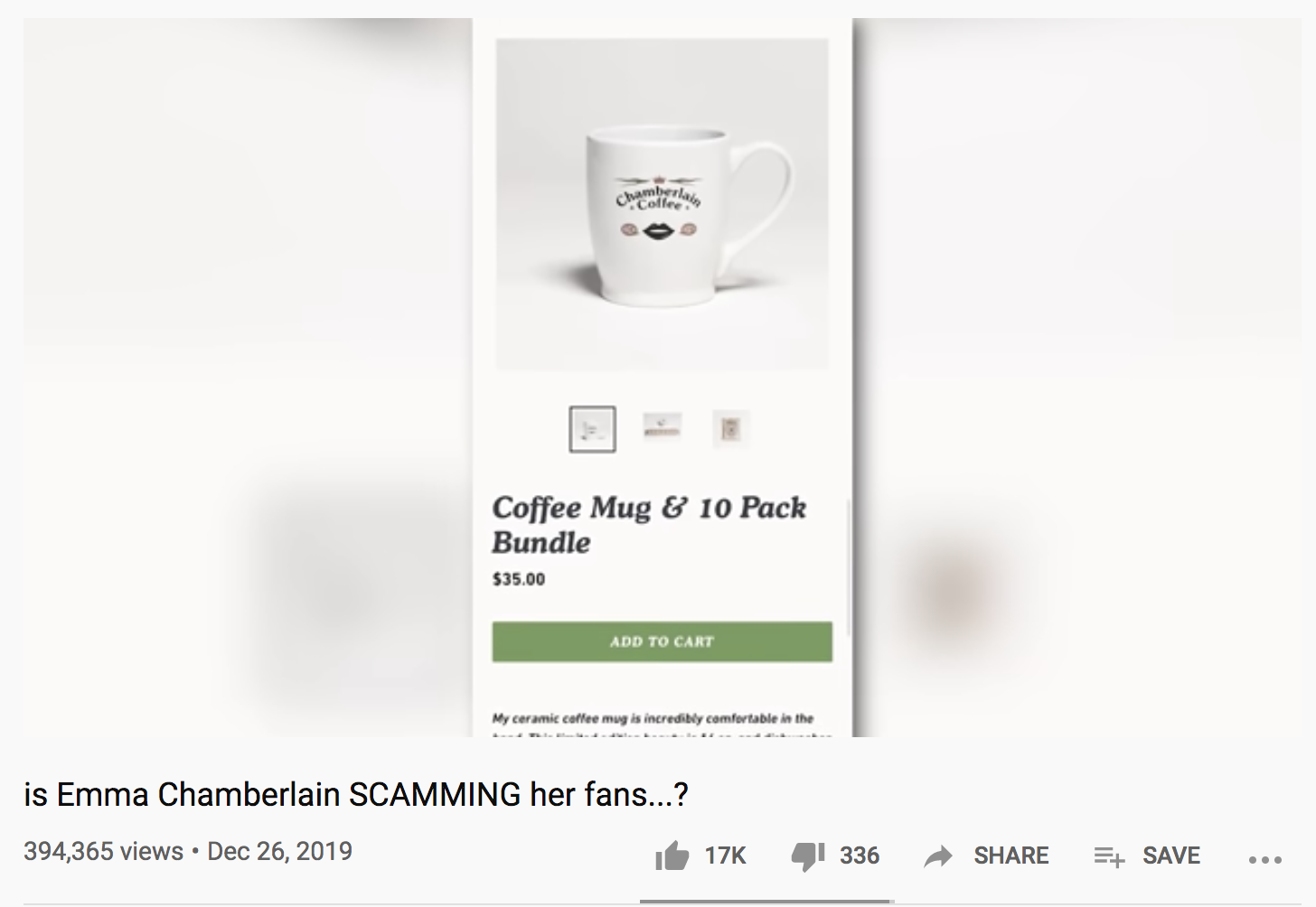 I reached out to Emma and her reps. Her publicist wouldn’t comment publicly on the price discretion, but she directed me to the press release that hailed the product as “delicious, easy, and guilt-free.” Since there were some questions about the sourcing of the beans, the marketing around Chamberlain Coffee seems to really emphasize its environmental friendliness.

“Every bag is nitro-sealed inside packaging that’s made using compostable and renewable materials, making every cup eco-friendly,” the press release read. “Emma personally selected a blend of sustainably grown coffees from Colombia, Guatemala, and Nicaragua…”

Still, the novelty and namesake of it all did not convince some of her fans that it was worth the cost.

The quick math on the packed pricing is that it’ll come out to $2 for each brew of coffee. It’s cheaper than going to a café but still much more expensive than most making-coffee-at-home products.

We can litigate what a fair cost for something like this might be, with variables like the quality and the convenience of the goods. But what I find a little more interesting and troubling is how colloquially the terms “scam” and “scamming” are being used. Real scams exist — so many intentional scams on the untethered internet by exploitative, fame-hungry people! — but this is not one.

This is plain ol’ marketing in the new era, my friends! Emma Chamberlain can sell single-use coffee bags for $60 because this is an influencer economy. She’s worked most of her adult life to make her face and name directly marketable — and for a high, high premium. She has the gall to mark up her prices because she knows her literal worth. And that worth has been determined by both the young vlogger’s own ego and by her adoring fans.

In plain terms, Emma is not “scamming” anyone. She’s set a price she knows her millions of fans will happily pay — and she’ll be proven right if they do.

If “scamming” within the context of influencer culture has evolved to mean generally “being unjust” and, like, ethically iffy, OK, I can hear your argument out. Gen Z’ers, email me.

But I’d reconsider how and where the blame is being distributed here.

Remember the 2018 scandal when Emma sold a pack of three scrunchies for $25? That’s over $8 pre-tax per scrunchie. They reportedly sold out within 29 minutes.

Until next time — I have one of those stove-top, one-serving coffee pots that works just fine. I think it cost me $12.99. I’ll even imagine my favorite Kardashian cosigning it if it makes it feel snazzier,