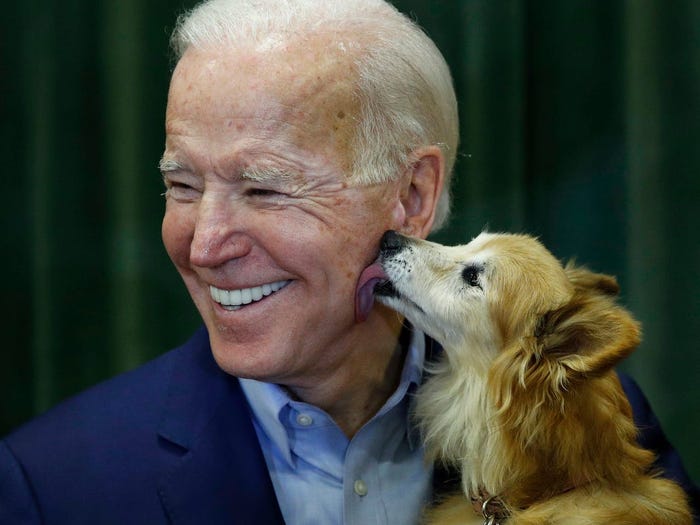 The Democratic nominee, Joe Biden, was projected on Friday to win the 2020 presidential race by Insider and Decision Desk HQ. On Saturday morning, other major news outlets declared Biden's victory.

After Biden's inauguration, the White House will be home to a new family: the Bidens', which includes two furry members, Champ and Major, the family's German shepherds.

Major, who was rescued from an animal shelter in 2018, has been gaining attention from news outlets and social media as "the first rescue dog to live in the White House."

But former President Lyndon B. Johnson's dog, Yuki, was actually the first.

Instead, Major will earn the title as the first shelter dog to live in at 1600 Pennsylvania Ave.

Lyndon B. Johnson and Abraham Lincoln both had rescue animals

Johnson had a handful of dogs throughout the course of his time living at the White House.

Among those pets was Yuki, a terrier mix. Johnson's daughter, Luci, found and rescued Yuki at a Texas gas station after his owner abandoned him in 1966, according to the Presidential Pet Museum.

Yuki and Johnson quickly formed a tight bond, and according to the Presidential Pet Museum, Yuki was Johnson's favorite pet.

On Johnson's birthday in 1967, Luci officially gifted Yuki to Johnson, according to The Lyndon Baines Johnson Presidential Library.

The duo could be spotted all across the White House. Johnson would bring Yuki to cabinet meetings, and they were seen swimming and howling together.

Former President Abraham Lincoln reportedly had a rescue dog, however, history isn't clear on how Lincoln and the dog, Fido, met.

But Fido, a yellow mixed-breed dog, never lived in the White House, according to the Presidential Pet Museum.

Fido was scared of crowds and loud noises, so Lincoln and his wife decided Fido would be happier with another family in another home.

According to The Washington Post, the Biden family had planned to adopt a second puppy while Biden was vice president. That way Champ would have a playmate while he was living at One Observatory Circle, the vice-presidential residence.

But that didn't happen, and it took nearly a decade for the family to adopt another dog.

In 2018, Biden's daughter, Ashley Biden, saw a social media post from the Delaware Humane Society about a litter of German shepherd pups that needed temporary housing, according to The Washington Post.

The Bidens' fostered one of the puppies, and after eight months, Major became a permanent member of the family.

In November 2018, the family officially adopted Major from the animal shelter shortly before Biden announced his campaign for the presidency.

Major, who is now 2 years old, and Champ currently live together. Soon, they'll travel to DC and keep the White House staff company.

The pups join a long list of presidential pets

Following the January inauguration, Champ and Major will move into 1600 Pennsylvania Ave.

But they won't be the most unusual animals to have lived in the home. From farm animals to tigers and alligators, the White House has welcomed some odd pets.

President John Quincy Adams kept an alligator in a bathtub at one point during his presidency, and President Martin van Buren fought to keep two tiger cubs.

Dogs, like Major and Champ, are the most common pet for a president to own. But for the last four years, the White House has remained pet-less.

President Donald Trump is the first president in more than 100 years to not own pets, and Biden took advantage of the tagline, "Let's put a dog back in the White House" throughout his campaign.