A remake of the 1980s classic All Creatures Great and Small hits screens tonight with an all-star cast and a storyline that will be ‘strikingly relevant’, despite being set in 1937.

The retelling of James Herriot’s tales of a rural vet in the Yorkshire Dales stars Mr Selfridge’s Samuel West and Oscar winner Rachel Shenton, and during a virtual Q&A ahead of the series, the cast and producers said they expect the show to resonate with a new generation of viewers.

Samuel, who has also appeared in The Crown, The Darkest Hour and Mr Selfridge,  explained: ‘I’m really pleased we’re in a good British drama series that isn’t about very rich people. I loved being in The Crown and I’m not going to knock it, but it’s been so much part of our calling card for so long and actually it’s not the zeitgeist now.

‘We’re living smaller, more carefully and more in harmony with nature and what we’re selling now is really very positive in all of those respects.’

Producer Colin Callender added: ‘At a time where we’re all separated and living in lockdown, this is a story about people coming together from different backgrounds and classes, and I think the story couldn’t be more of the moment.’

It comes amid a huge surge in popularity of shows about rural life, with Our Yorkshire Farm, a Channel 5 show following the real-life dramas of a shepherdess and her nine children, emerging as the suprise hit of the summer. 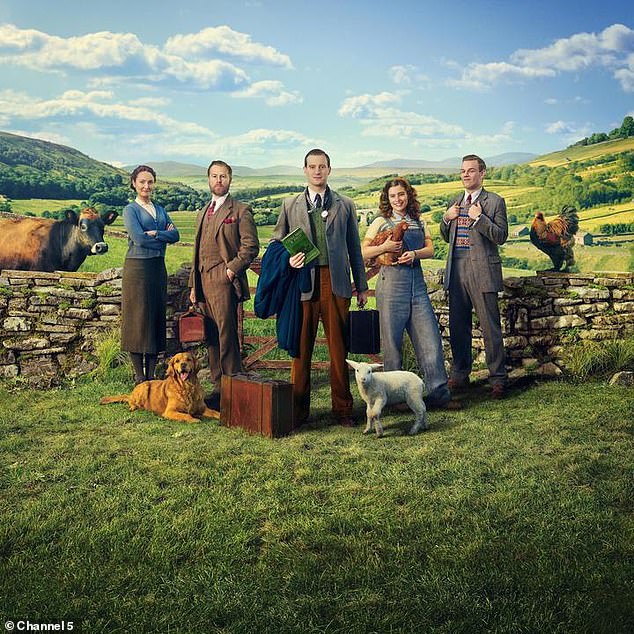 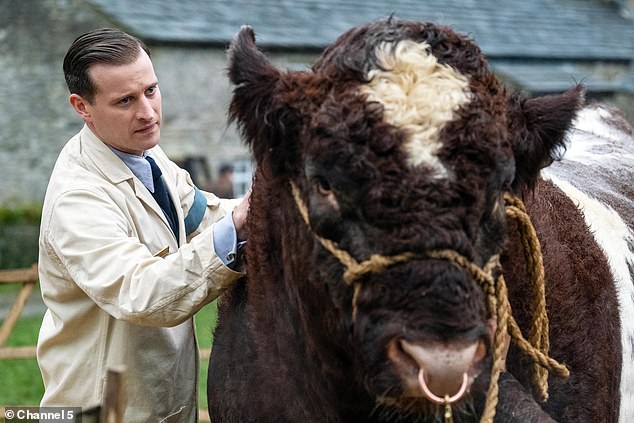 In tonight’s episode, which will be the first in a series of six, newly-qualified James (played by newcomer Nicholas Ralph) arrives at veterinary practice at Skeldale House to start a job as the assistant of the eccentric Siegfried Farnon (Samuel West) who serves many farms in the local community.

James, a baffled city boy who travelled to the countryside from Glasgow where his parents urged him to work on the docks, finds himself in trouble when he gets off the bus too early and has to walk through the night in the pouring rain to get to the veterinary practice.

Before he alights the bus, he meets Helen Alderson, played by Rachel Shenton,  who later becomes his love interest.

On his eventual arrival in town, James is greeted by housekeeper Edna Hall (played by Anna Madeley) and his new boss, who isn’t interested in an interview but instead takes him straight out on a job.

Dressed in a suit, tie, and dress shoes James heads straight into a field to help get pus out from a horse’ s hoof.

But he is repeatedly kicked over by the thoroughbred, and falls into mud covering himself from head to toe.

Undeterred, he carries on to help the animal get better, much to the amusement of his new boss and the locals. 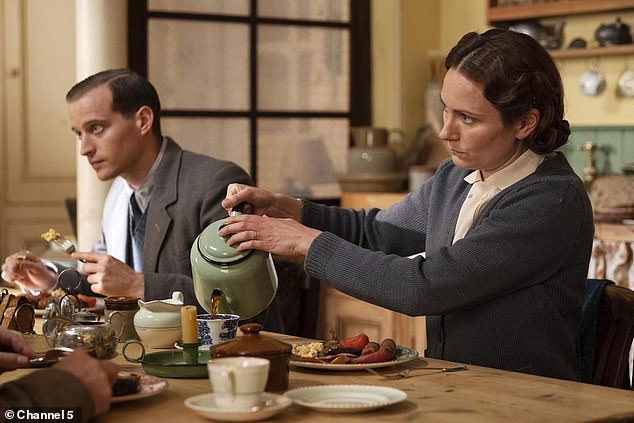 James Herriot (Nicholas Ralph, left) a baffled city boy who travelled to the countryside from Glasgow, finds himself in trouble when he gets off the bus too early and has to walk through the night in the pouring rain to get to the veterinary practice, on arrival he’s greeted by housekeeper Mrs Hall (Anna Madeley, right) 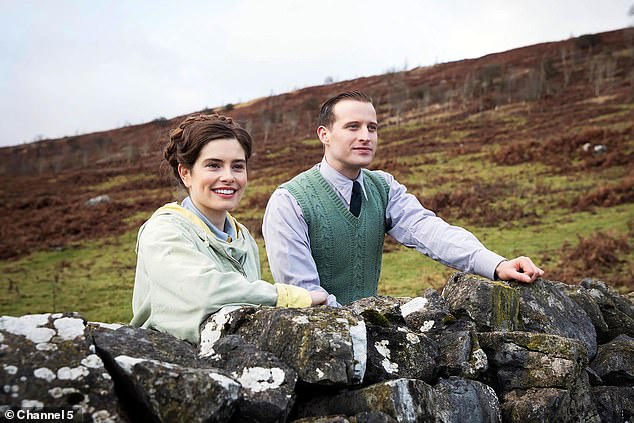 In tonight’s episode, which will be the first in a series of six, newly-qualified James (played by newcomer Nicholas Ralph, pictured right) arrives at veterinary practice at Skeldale House to start a job as the assistant of the eccentric Siegfried Farnon (Samuel West) who serves many farms in the local community.  He soon meets and becomes smitten with local lass Helen (played by Rachel Shenton (left)

In the hour-long season premiere, James quickly becomes involved in life in the village, getting drunk in the pub with locals, bonding with housekeeper Mrs Hall, and even travelling to a rural farm in the middle of the night to help a cow in labour.

In one hilarious scene, James returns the wrong cat to its owner and all hell breaks loose when he realises there’s been a huge mix-up due to his heavy night the day before.

As well as getting to know his larger than life boss, James meets Helen again in the first episode, when he and Siegfried are called out to her father’s farm to help an ailing calf.

On his way in, he is confronted by a cow and climbs onto a wall for safety in fear of the animal, before being saved by cool as cucumber Helen.

The story is based on the real experience of James Herriot (real name Alf Wright) and his semi-autobiographical series of books, which were based on his interactions in North Yorkshire.

The collected works of All Creatures Great and Small have sold 60million copies internationally and have never been out of print.

Its most famous adaptation originally ran on the BBC from 1978 to 1990 with Christopher Timothy as the Dales vet and Robert Hardy as his boss, Siegfried Farnon. 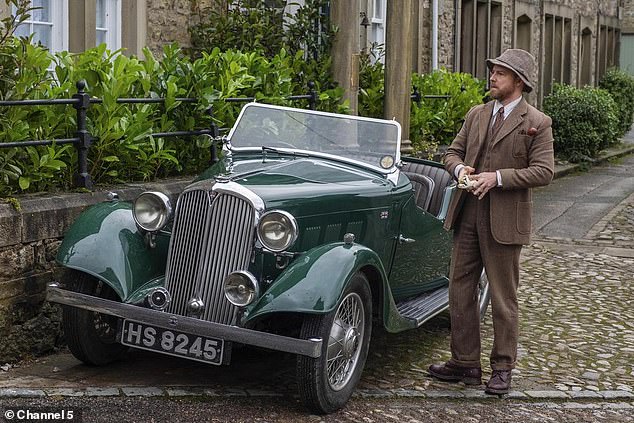 Discussing the pressure of playing such a well-known and loved role, Samuel West (pictured) explained to FEMAIL that he used the knife from the real life version of his character in the first scene he filmed.

Donald Sinclair, a real life vet and local celebrity, was the basis of Siegfried’s character.

Discussing the pressure of playing such a well-known and loved role, Samuel West explained to FEMAIL that he used the knife from the real life version of his character in the first scene he filmed.

Speaking at a virtual press conference ahead of the show, he said: ‘On the very first day, Nick was looking at this horse, the one that kicks him and Andy [Hay, the show’s director] handed me a thing called a hoof knife, which I have to give to James.

‘I look at this things, and in faded Biro it says D Sinclair, it’s Donald Sinclair’s hoof knife and we used it in our very first scene together.’ 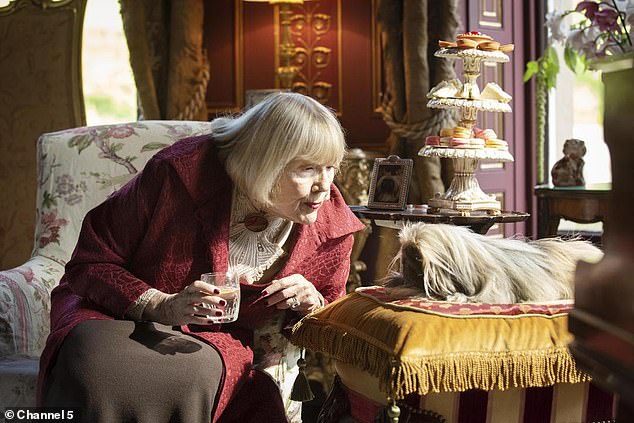 Mrs Pumphrey (Diana Rigg) & Tricki-Woo (Derek)  are pictured. The adaptation originally ran on the BBC from 1978 to 1990 with Christopher Timothy as the Dales vet and Robert Hardy as his boss

‘And as an actor when you’re thinking “Oh god, I’ve got to play this really well known part for quite a long time and big shoes and everything”,  but something that says “While you’re holding this you are him”, that really helped.’

Just like Siegfried, in real life Sinclair was famously eccentric with Samuel also recalling how the vet once fired his shotgun into the wall when he wanted people to leaving a dinner party he was hosting.

While the series is set in 1937, creators said they were keen to develop female characters more than in previous adaptations.

Rachel, who won a best live action short film Oscar in 2017 for The Silent Child, explained she spoke to children of Joan Danbury, the real-life inspiration behind her character to help understand her role. 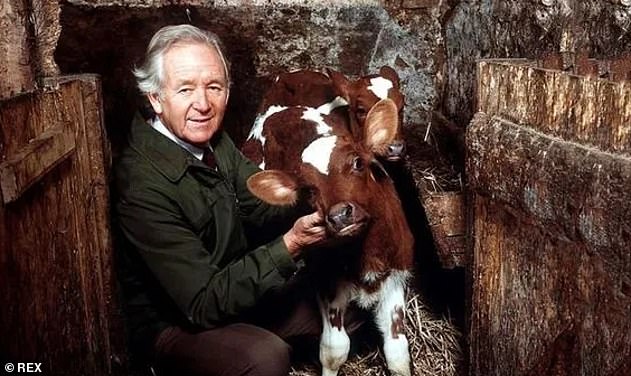 The man himself: James Herriot, above, who died in 1995, wrote memoirs based on his experiences with animals as a vet 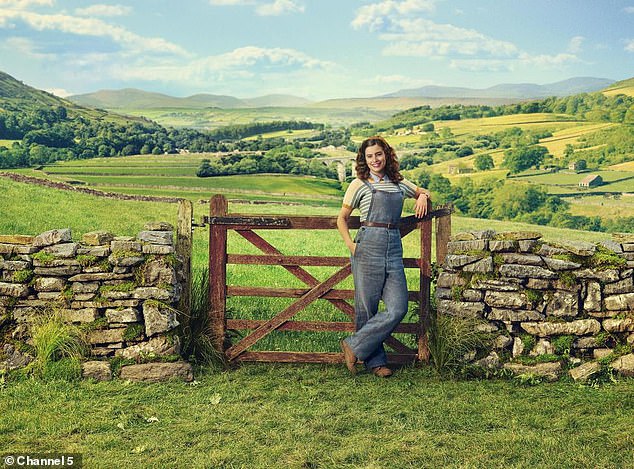 Rachel, who won a best live action short film Oscar in 2017 for The Silent Child, which she wrote and starred in. explained to FEMAIL she spoke to children of Joan Danbury, the real life inspiration behind her character to help understand her role. She is pictured on the show as Helen

‘I got some really nice nuggets of information from them, one being her wicked sense of humour and keen eye for mischief.

‘They said that if there was ever a cheeky joke their mum would be the one to tell it.

‘She was the first woman in the village to wear trousers, now I’ve done the wrangling of the bulls it makes sense, wearing a dress would have been completely impractical.’

Rivalling for Helen’s attention is wealthy landowner Richard Edmundson, played by Matthew Lewis, who is best known for his role as Neville Longbottom in the Harry Potter films.

The character, who is described as Helen’s childhood sweetheart and very handsome, makes his debut in the second episode and is sure to make some viewers swoon. 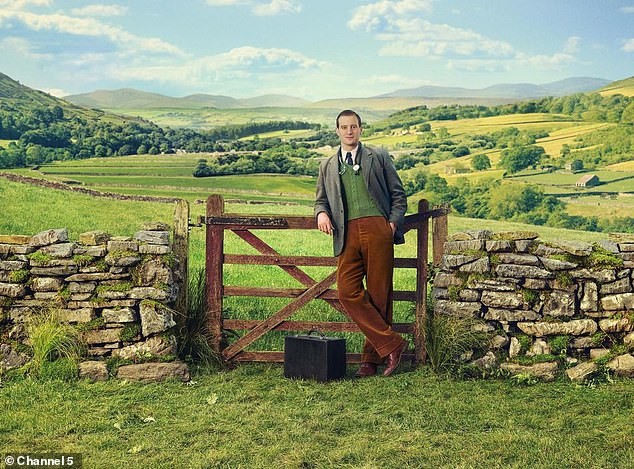 The show is set in the stunning Yorkshire Dales, and will air after The Yorkshire Vet, a real-life programme about a of Skeldale Veterinary Centre in Thirsk, North Yorkshire – once the practice of James Herriot. Pictured is Nicholas Ralph as James

Although they don’t all make an appearance in the premiere, the cast is full of famous faces including Nigel Havers (Coronation Street) who portrays the manager of the local racecourse, as well as Game of Thrones star Dame Diana Rigg who plays the peculiar widow of a wealthy beer baron and is obsessed with her dog and the surgery’s most famous patients Tricki Woo, played by a Pekingese called Derek.

Also starring is Callum Woodhouse (The Durrells)  as Siegfried’s younger brother Tristan who spends more time in the pub than helping animals.

While the original series, which aired on the BBC, was hugely successful and had a 12- year run, the show’s executive producer Colin Callender also revealed that the drama is more character-led than its predecessor. 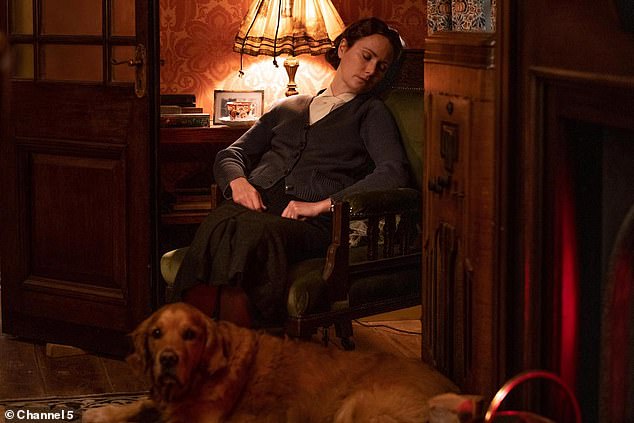 Mrs Hall (Anna Madeley) is pictured with one of the show’s many adorable creatures, a golden retriever, cuddled in front of a fireplace

‘There’s a depth to to these characters that I think a contemporary audience wants,’ he explained.

‘They expect this from their dramas, that characters are rooted in a psychological reality and a time and place. This was England after World War I and between the wars and the depression, so this story seemed to be resonant with a whole range of themes that are strikingly relevant to the day.

‘And who could have guessed that when it aired we’d be in a world where all those issues were aired and would be more dramatically real than ever before. 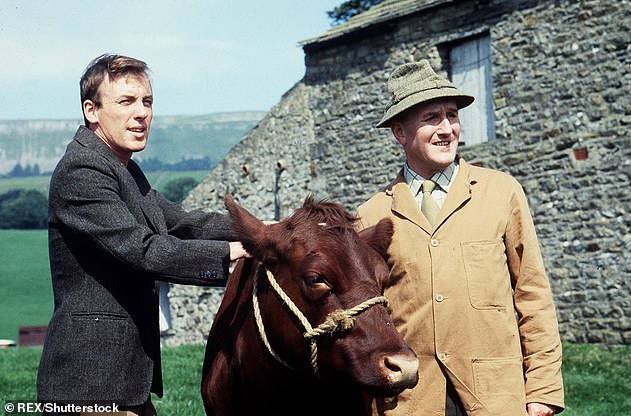 The old days: Actors Christopher Timothy and Robert Hardy are pictured on set in 1979, when playing the vet and his boss

The show is set in the stunning Yorkshire Dales,  and will air after The Yorkshire Vet, a real-life programme about a of Skeldale Veterinary Centre in Thirsk, North Yorkshire – once the practice of  Alf Wright.

The Yorkshire Vet is narrated by Christopher Timothy, who played Herriot in the original series of All Creatures Great and Small that aired 30 years ago.

Callender added: ‘One of the starring characters of the show is the Yorkshire Dales  and with the new camera technology and drones we would be able to bring that to life in a way that is inherent to the story-telling’.

Also a soaring success for Channel 5 this year has been Our Yorkshire Farm, which became a surprise rating hits beating out the BBC, ITV and Channel 4 in the 9pm slot for the last two weeks.

The show followed the lives of Amanda and Clive Owen, aged 45 and 65 respectively, and their nine children at a remote hill farm in the Yorkshire Dales. 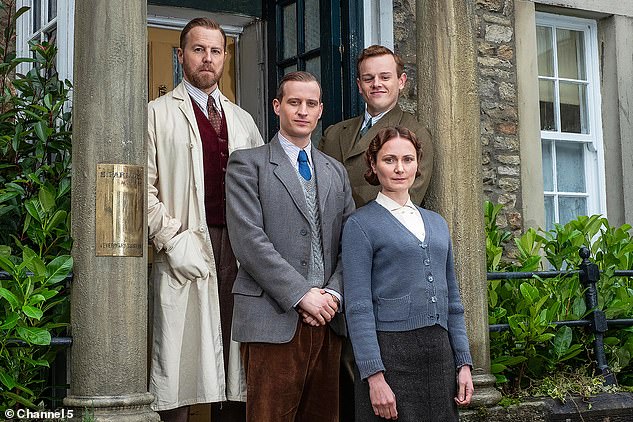 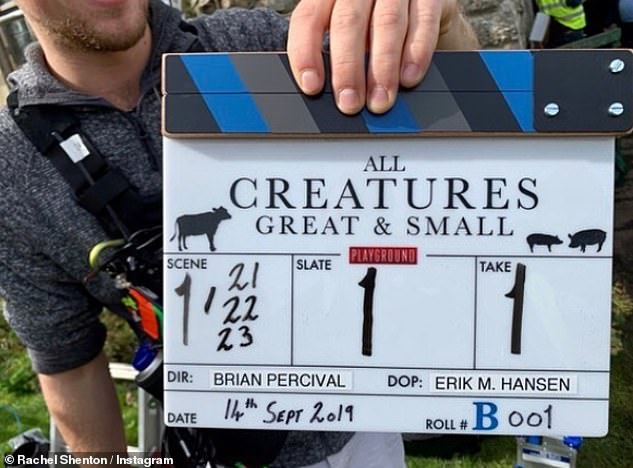 Take one: Rachel Shenton took to Instagram last autumn to share this picture and announce her casting in the series, which she said she was over the moon about

Sebastian Cardwell, the digital channel controller at Channel 5, previously said: ‘James Herriot has a special place in the heart of the public and the commission of this iconic drama series, against the stunning backdrop of the Yorkshire Dales, is set to bring joy to a new army of TV viewers.

‘In challenging times we hope the charming and heart-warming stories of community and compassion will resonate with new audiences.’ 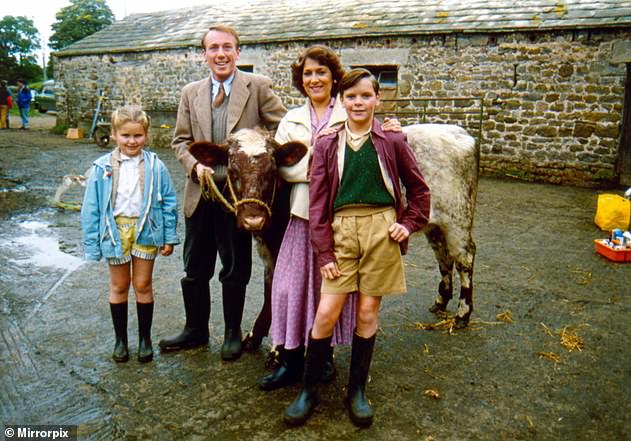 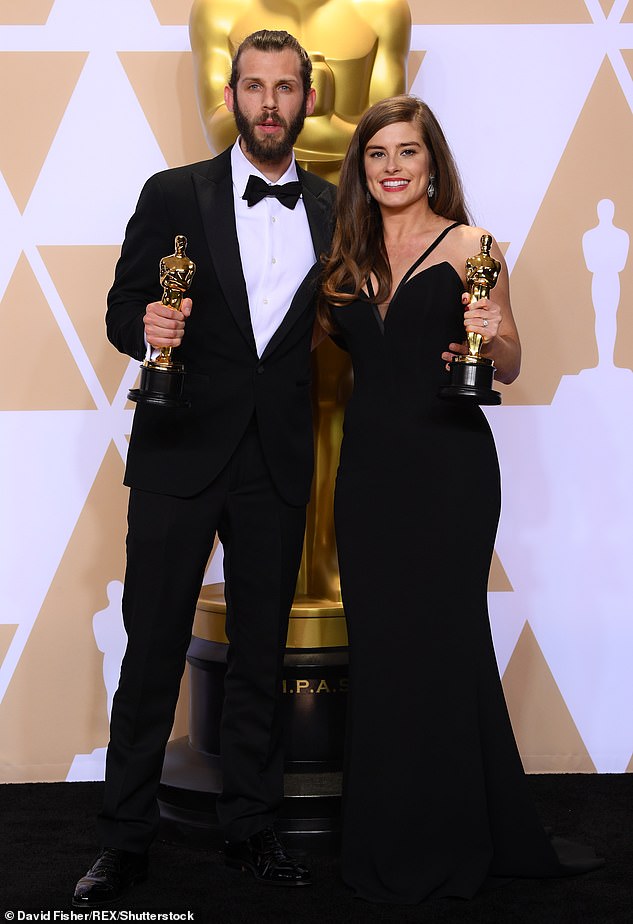 Success: Rachel, pictured with Chris Overton, won a best live action short film Oscar in 2017 for The Silent Child, which she wrote and starred in