The election resulted in a new government, which is what it was meant to do. But by the end of Saturday night something else had happened that suggests this election could prove a watershed moment in Australian politics – a shake-up in how we are governed and what many Australians demand to see from their representatives.

Labor leader Anthony Albanese will assume the prime ministership and lead the 47th parliament, despite the party garnering about a third of the national primary votes, a record low in the modern era. Australians rejected the Morrison government, but did not wholeheartedly embrace Labor, even if it got there on preferences and is close to forming a majority government. 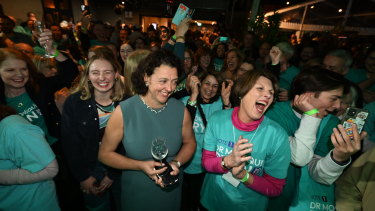 Independent Monique Ryan celebrates with supporters after winning the seat of Kooyong from Josh Frydenberg.Credit:Joe Armao

Australian voters are disillusioned with the conventional two-party system. The notion of a national electorate is fracturing. We are voting on different issues in different seats, with the major parties not dominant as they once were.

The crossbench in the 151-seat lower house is likely to comprise as many as 15 crossbenchers, including independents, and as many as four Green MPs. On current counting, there will be eight “teal” independents – including six new ones elected on Saturday – linked by demands for greater action on climate change, a strong integrity commission and improved conditions for women.

Those elected at the weekend appealed to frustrated small-l voters who believe the Liberal Party’s values no longer align with their own. But in Fowler, in Sydney’s west, the election of independent Dai Le, who was not a “teal” but a local candidate who defeated Labor frontbencher Kristina Keneally, suggests that communities will reject attempts to “parachute in” outsiders.

What this means is that Albanese and his government will need to negotiate and persuade on key issues, not necessarily a bad thing. Labor has prioritised greater action on climate change and an integrity commission, and the country will see action in these areas. Labor’s climate change target (a 43 per cent cut to 2005-level emissions by 2030) falls short of the 60 per cent demanded by the teal independents. The Greens want an even bigger cut of 74 per cent by 2030.

The Coalition government held up action on climate change and a federal commission for years, and paid the price as community views changed. There will be disagreements and compromises in the new parliament, and it will be a test of the new government how skilfully it manages them.

The Coalition has suffered a devastating defeat, no more so than in Victoria. To say it faces an existential crisis is not hyperbole. To be likely to lose to an independent in heartland seats such as Kooyong – the seat of Liberal Party founder Robert Menzies – is historic, and the party has begun soul-searching about whether its shift to the right has alienated many of its most loyal supporters.

It has lost at least two seats to Labor in Victoria – Higgins and Chisholm – and will be left as a rump in the second most populous state in the nation. It cannot hope to win a federal election without appealing to more Victorians.

Labor has won and we congratulate the new government. But this election has done much more than choose a new government – it has shaken up the political conventions in a way that may prove profound.

Gay Alcorn sends an exclusive newsletter to subscribers each week. Sign up to receive her Note from the Editor.