The Andrews government has bowed to pressure and agreed to abandon controversial new legislation designed to make it easier to detain people during the coronavirus pandemic.

Legal experts and civil rights' groups had raised concerns over the COVID-19 Omnibus (Emergency Measures) and Other Acts Amendment Bill, warning the proposed powers would be "unprecedented, excessive and open to abuse". 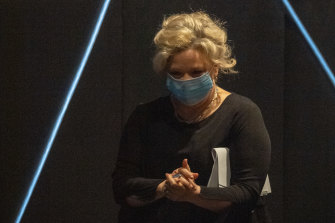 The government faced fierce backlash from the Opposition and upper house crossbench MPs over the new laws that would have allowed the government to make anyone an authorised officer with the power to arrest people with coronavirus, or their close contacts, whom the officer reasonably believed was "likely" to breach emergency directions.

Attorney-General Jill Hennessy said the amended bill explicitly specifies who can be appointed as an authorised officer, as well setting out the limits on powers they can exercise.

She said clause 252, which allowed a designated authorised officer to detain a person if they "reasonably believed" they were required to comply with emergency directions and were likely to spread the virus, had also been deleted.

The rules could have been applied to conspiracy theorists who refused to self-isolate, or people who were severely drug-affected or had a mental impairment and did not have the capacity to quarantine.

"Whilst we think the concerns raised in the original bill didn't have a legal basis, we are keen to address the majority of the concerns [the crossbench raised]," Ms Hennessy said.

"Crossbenchers have been very upfront about wanting to support initiatives that advance public health protections but have raised some legitimate questions. In many instances, our intent has been shared – we wanted to give them absolute legislative clarity to encourage them to support the bill."

It remains unclear whether the government will be able to secure the support of at least three of the crossbench MPs for the amended bill, but it has ended a major roadblock by removing the controversial elements of the legislation.

Premier Daniel Andrews last month defended the intention behind the controversial elements of the original bill, which passed the Labor-controlled lower house.

"There are some people who are not compliant, refuse to act in a responsible and safe way," Mr Andrews said at the time.

"Those powers would not be frequently used. They would be, I think, rare. But they are important. We wouldn't take these steps if we didn't believe they were proportionate to the challenge we face. We are in unprecedented times.

"I don't predict outcomes in the upper house but I can predict that our negotiation and our conversations will be in good faith and I'm always grateful to crossbenchers who engage in that."

The Andrews government had been under increasing pressure to pass the bill, which contained measures needed to keep critical government and legal functions running during the pandemic – such as judge-only trials and online hosting of local council meetings and parliamentary committees.

The body representing Victoria's barristers wrote to Ms Hennessy last month to warn that proposed laws to detain people suspected of potentially spreading coronavirus could breach the state's human rights charter and allow citizens to be placed in arbitrary detention.

The Victorian Bar called for any application of what it labelled the "extraordinary and personal detention" to be reviewed within 24 hours by the Chief Health Officer or his delegate.

"Otherwise, the detention would be arbitrary and contrary to section 21(2) of the Charter ('a person must not be subjected to arbitrary … detention')," the letter to Ms Hennessy said.

The Bar also called on the government to narrow the scope of who can be appointed to enforce public health rules.

Our weekly newsletter will deliver expert analysis of the race to the White House from our US correspondent Matthew Knott. Sign up for The Sydney Morning Herald‘s newsletter here, The Age‘s here, Brisbane Times‘ here and WAtoday‘s here.