Scott Morrison is not usually known for his self-deprecating humour, but this week he wasted little time acknowledging the elephant in the room when addressing a who’s who of business and political leaders.

Taking the stage at Melbourne’s Exhibition and Convention Centre, the Prime Minister offered a nod to his recent international trip which led to negative global headlines, name-calling and further diplomatic tensions.

“Now, some of you might have heard that I was in Rome and Glasgow recently for the G20 and COP26,” Morrison told the room with a smirk. “A little bit went on while I was there.”

Morrison was referring to a very public deterioration in his relationship with French President Emmanuel Macron, who accused him of lying over a terminated submarines deal. It followed a subtle backhander from US President Joe Biden over the way the deal was handled and further criticism from Pacific and North Atlantic nations over Australia’s refusal to update its Paris climate targets.

Political opponents, commentators and talking heads lashed Morrison over further claims of dishonesty at a time when he still lags in a majority of published opinion polls with, at most, six months until Australians head to the ballot box.

Morrison says he doesn’t regret the trip – which was supposed to have highlighted the Coalition’s climate conversion after an internal struggle to adopt net zero – in the slightest. He is glad he had an opportunity to explain his position on the world stage and to support his close ally, British Prime Minister Boris Johnson, in his efforts to address global warming.

But he is banking on the fact that very few Australians took much notice in the same month that they have been granted freedoms from 18 months of rolling lockdowns. It is on this issue that he is shaping and testing the battle lines for next year’s election.

Having spent much of the past year isolated both physically and often politically, Morrison hit the pavements this week in a mini-campaign through the NSW Hunter region and to Melbourne, a city and a state widely viewed as hostile towards him.

He arrived with two messages he thought would resonate. His first was that lengthy lockdowns are over and it’s time for governments to let people live their lives again. The second was that his government knows Australians want action on climate change and wants them to know they’re taking it seriously.

In the Mount Erica Hotel on High Street, Prahran on Wednesday night, those enjoying a social drink spoke little about the latter and more about the former. Prahran sits in the long-time Liberal electorate of Higgins which, through demographic change, now has a young, progressive streak and is one of the government’s most marginal Victorian seats. 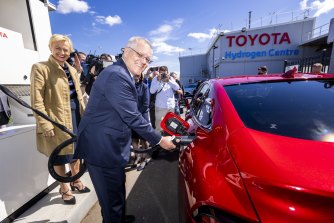 Morrison walked into the pub around 6.15pm and stayed for hours, leaving only after schnitzel with chips and salad with his colleagues. One by one he introduced himself to patrons having a social drink, posed for countless selfies, poured beers and quizzed them about their lives. The common thread was that they were glad to be out and about again after a hellish year. He was delighted to meet a young woman, Ruby, who shared a professional interest.

“Everyone, this is Ruby from marketing,” he announced to laughter along the front bar, nodding to a nickname given to him by his critics. “We’re swapping some notes!”

Prime ministerial advisers organising the trip to Melbourne were initially, perhaps justifiably, nervous about how the PM would be received. His pub visit fell on the same day Premier Daniel Andrews was forced to cancel a press conference in Bendigo amid police fears for his safety.

But they needn’t have worried. If Morrison was out of sorts after countless days of isolation at The Lodge, he quickly found his rhythm and reminded all he is a strong campaigner. And the punters, whether they intend to vote for him or not, were more than warm in their welcome.

“I think people are relieved and thrilled to be opening up and getting their lives back,” Morrison told The Age and The Sydney Morning Herald. “And I think this is a real pivotal moment where, you know, the country’s got to gear change. It’s got to change out of this mindset, which is all about hunkering down, to opening up.

“Australians have had enough with people telling them what to do. It’s time to get past that.”

In the rush to reopening, which he says will happen in a safe and orderly way, the PM is keen for people to remember that the past 18 months will have left major mental scars on many Australians – those who lost loved ones, those denied a chance to say goodbye, children who missed what should have been their first days of school.

“It was COVID which took that away. Let me be clear about that,” he says. “But I think a big part of the healing process for the country is changing the mindset. Governments have had their role and their time to do things that I don’t think any of us should really like them being able to do. But they need to understand that time is done.

“We can’t sort of hold on to these powers. We should be moving on and giving people back the freedoms that we all once took for granted. We want Australians to feel confident again, in their own enterprise and their own efforts.” 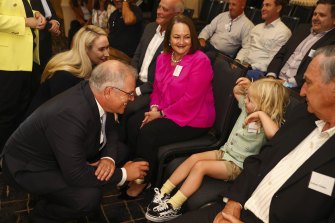 Pleased to meet you: Scott Morrison at the Kahibah Sports Center in Newcastle on Monday.Credit:Dominic Lorrimer

With an election likely between March and May next year, the government is likely to hand down another budget in some form beforehand. As with the 2019 poll, this will likely mean a pivot away from other debates and a refocusing on the economy.

Morrison concedes there may again be major economic challenges on the horizon. The $1 billion budget blowout of his government’s pandemic response has left him wide open to criticism over eye-watering levels of government debt from his own supporters. It’s also given Labor a strong attack line, should it choose to run with it.

Despite Reserve Bank of Australia forecasts that the economy will grow by 5.5 per cent over the next year, Morrison warns of inflationary pressures, particularly in the United States, causing issues in the coming months as well as global supply chains being disrupted.

“The part of the world we live in is incredibly uncertain. There’s a security dimension to it, but it’s not just about national security, it’s about economic security,” he says.

“And these are the issues that I think will frame whether Australia’s successful over the next 10 years. And so economic management, once again, national security, [are] critical to the country Australians are going to live in and the choices we make.”

Morrison says with the global energy economy transforming as the world responds to climate change, those forces have very real implications for Australia.

It’s why he believes that despite international pressure, an economic transition to carbon neutrality cannot be done the same way other nations are doing it.

After 10 tortuous years of climate debate, Morrison says the government now has what he thinks mainstream voters – or the group he dubbed “the Quiet Australians” at the last campaign – will believe is a credible plan. He appears unfazed that large groups to the left and right of him politically – as well as environmental groups, industry and climate activists – find his plan anything but credible.

Morrison laments that the atmosphere at Glasgow from many leaders was “defeatist”, preferring Boris Johnson’s “boosterism”. He is convinced government and private investment in technology and consumer demand for green products will help the world drastically reduce emissions.

“I’m very confident we can solve this,” he says. “I have much more confidence based on the track record of world history that this will be solved by the entrepreneurs and the scientists and the industrialists and the risk-takers and the investors … supported by smart regulation.”

Labor sees this line as another handballing of responsibility away from government to others, something they plan to attack him on every day until the election. And they have already deemed Morrison’s so-called climate conversion dead and predict he will return “back to dishonest scare campaigns”.

The opposition reacted furiously to his electric vehicle strategy this week, having been on the receiving end for their own policy at the last election.

Morrison, in typical style, has refused to volunteer any ground on the issue. He denied ever ridiculing the technology this week. It further enraged those who believe he is shifty, a liar and a conman on climate.

But Morrison thinks the Australian people understand where he is coming from. “They believe [climate change] is really important but, you know, they’re not all out gluing themselves to things about this,” he says.

“Most Australians are quite practical about it. And I think this is where so much of Australia is at: ‘yeah, we’ve got to deal with that. We’ve got to sort that. But can you just get on and sort it’.”

Having used climate politics to destroy its opponents for years, the Coalition now thinks it has a one size-fits-all policy to hold on to seats in the inner city, the suburbs and the regions.

It won’t please everyone. Perhaps not even anyone. But Morrison seems certain he’s found a middle ground to finally neutralise the bitter politics of climate change.