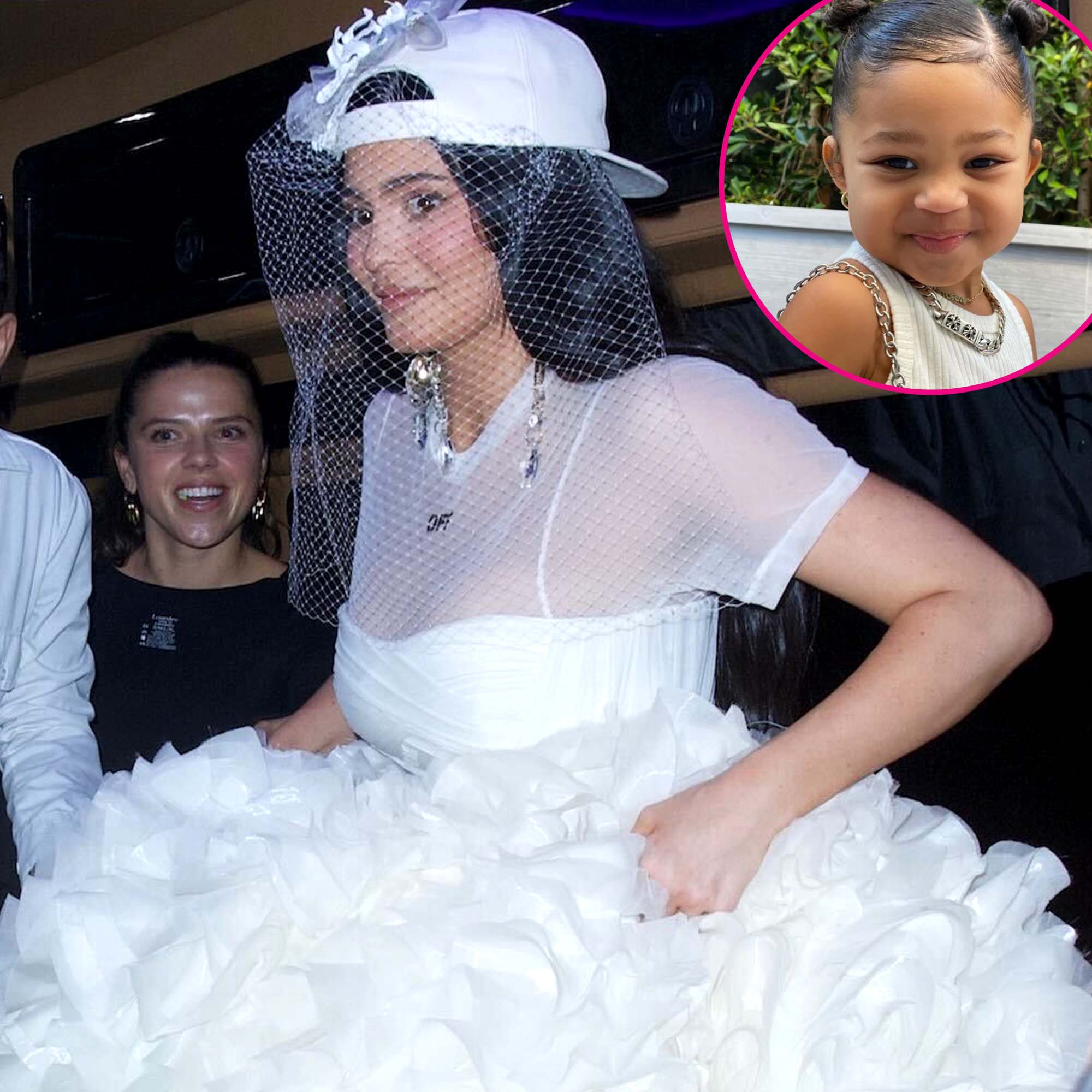 Mom’s night out! Kylie Jenner attended the 2022 Met Gala on Monday, May 2, nearly two months after welcoming her second child with boyfriend Travis Scott, but daughter Stormi stole the show during her prep.

The Kylie Cosmetics founder, 24, wore a white, bridal-inspired gown on her way to the red carpet at the Metropolitan Museum of Art in New York City. Stormi, 4, clearly approved of the look, giving it a final fluff before Jenner walked out the door.

As the reality TV star’s team recounted the night’s schedule, Stormi sat on the floor and played with the dress’ train in an Instagram Story clip. The toddler, who celebrated her 4th birthday earlier this year, stayed casual in a pair of gray sweatpants and a yellow hoodie.

Stormi’s mom’s Monday appearance at the annual fundraiser — which is centered around an “In America: An Anthology of Fashion” theme — marked her first Met since her second little one was born. Jenner and the 31-year-old “Highest in the Room” rapper confirmed their son’s birth in February, weeks before announcing his name was Wolf. They have since changed his moniker, opting to pick a name that better fits his personality. 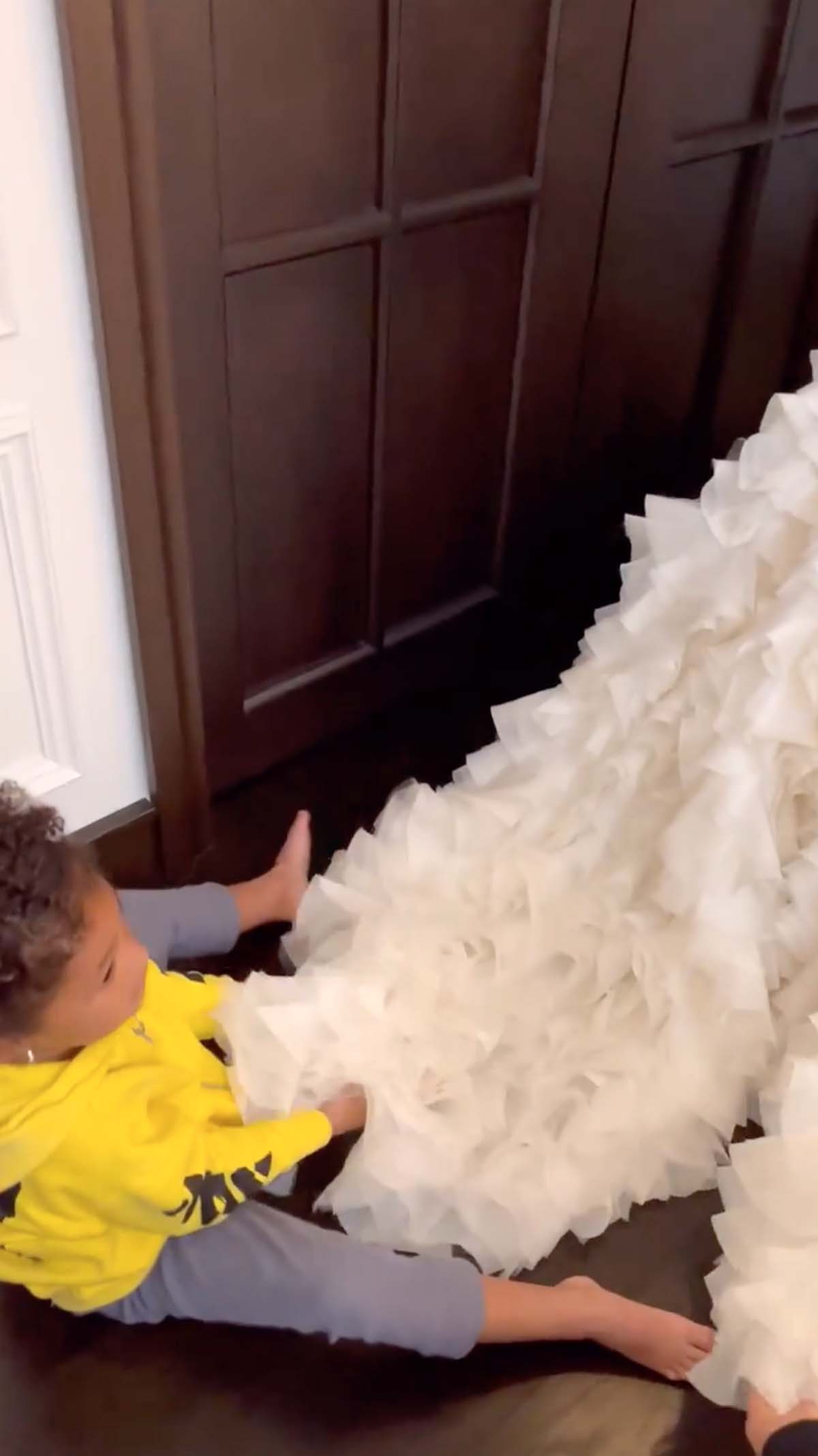 “We haven’t officially changed it,” the Kardashians star told Entertainment Tonight last month. “Before I officially change it, I want to make sure. … Wolf was never on our list. It just was something Khloé [Kardashian] suggested. I liked the name. There’s nothing against Wolf, it just wasn’t him.”

Couples Who Made Their Red Carpet Debut at the Met Gala

Since welcoming her son, Jenner has also been candid about her postpartum journey and getting her body back in shape.

“I realized that I was putting some pressure on myself, and I just keep reminding myself I made a whole human, a beautiful healthy boy,” the Life of Kylie alum said in an Instagram Story video in March. “We have to stop putting pressure on ourselves to be back, not even physically just mentally, after birth.”

Jenner and Scott — who were first linked in April 2017 — previously attended fashion’s biggest night in May 2019. To celebrate the “Camp: Notes on Fashion” theme, the reality TV personality donned a purple Versace gown, elaborate jacket and matching wig. The Texas native, for his part, opted for an olive-green ensemble and a utility belt.

The twosome, who made their Met Gala debut as a couple in 2018, skipped last year’s festivities amid her second pregnancy.

Fashion’s Biggest Night! Everything to Know About the Met Gala 2022

“Kylie was planning on going to the Met Gala but then backed out last minute,” a source exclusively told Us Weekly in September 2021. “She attended a few New York Fashion Week events and then decided it would’ve been too much stress on her body and too overwhelming to attend the Met Gala.”

The insider noted that the beauty mogul “needed a break” and aimed to “focus on her pregnancy.”