The Dendy Cinemas at the steps of the Opera House, one of Australia's most picturesque movie theatres, will close its doors next month.

United Cinemas, which operates eight cinema centres around Australia, will take over the location – it is also building a cinema at McGrath's Hill in Sydney's west. 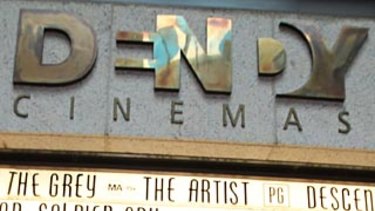 Dendy Cinemas will be leaving its Opera Quays location.Credit:Simon Alekna

"It is with great sadness that we must inform you that our lease at Opera Quays has not been renewed and we will be closing our doors on February 26th 2020," a statement on the Dendy website read.

"We’d like to personally thank you for your patronage over the last 20 years and we hope to welcome you at our sister cinema in Newtown."

The group's first cinema was a one-screen operation established on Dendy Street in Melbourne's Brighton Bay by businessman Robert Ward and his father.

On the basis of its success, the Wards established several cinemas around Melbourne and, in the mid-1970s, took the operation to Sydney.

In 1981, new owners Barbara Grummells and Fred O'Brien relaunched the Dendy Martin Place with the slogan "From tart house to art house", and began screening foreign-title films and avant-garde classics – it lasted until 2003, when it closed.

The Dendy group was bought by Mel Gibson’s film company, Icon Productions, in 2008.

In addition to the Newtown location, there are two Dendy Cinemas in Queensland – at Coorparoo and Hamilton – as well as one in Canberra. The Melbourne locations have been sold or shut down.