The family of an Australian man who has been detained by the Myanmar military has called for his immediate release, saying he is a dedicated family man who has devoted more than two decades of his life to the south-east Asian country.

Sean Turnell, a special economic adviser to the Myanmar government under detained leader Aung San Suu Kyi, was taken into custody at the weekend by military officers who arrived at his Yangon hotel and escorted him to a police station. 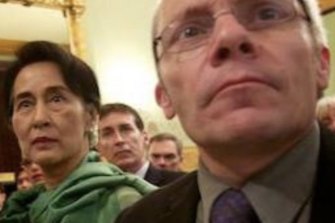 Sean Turnell, right, with Aung San Suu Kyi. His family described Professor Turnell as someone who “read voraciously” and had always had a “thirst for knowledge”.

His wife Ha Vu, an Australian academic at Macquarie University, released a statement overnight saying the family was “distraught” following his detention in Myanmar as part of the military coup.

The family asked for privacy while Australian diplomats worked “tirelessly” to get Dr Turnell home.

“We are distraught that Professor Sean Turnell, our beloved family member and an internationally respected academic, has been detained in Myanmar,” the family said in a statement.

“Sean Turnell is a dedicated family man, beloved of his wife and daughter, his dad and his sister and her family, as well as to an extended family in Australia and in Vietnam.

“He is warm and kind-hearted, generous, and always thinks about others before himself. Even now, wherever he is confined, we know that his thoughts and concerns are with those worrying about him.”

The family described Professor Turnell as someone who “read voraciously” and had always had a “thirst for knowledge”.

“He is a practical economist who has and will always use his expertise and experience for a good cause,” the family said.

“Myanmar is a country with which he has fallen in love, and through working on and for it for more than two decades he brought jobs, investment and hope to many of the poorest people there without thought of reward or concern for his own advantage.

“We welcome the calls by the Australian government, other governments and by Sean’s many friends around the world seeking his immediate release.”

The family said they would not be making further public comment given the “complex and sensitive” situation in Myanmar.

Australian diplomats were moments away from arranging for Professor Turnell to be taken to a safe place before soldiers detained him at Yangon’s Chatrium Hotel, where he had been staying since returning from Australia.

Australia’s ambassador to Myanmar, Andrea Faulkner, and other diplomats in the embassy had been in contact with Professor Turnell in recent days before his detention.

Foreign Minister Marise Payne said on Monday Australia was “deeply concerned” by the military coup and had called for the “immediate release” of Professor Turnell.

Our Morning Edition newsletter is a curated guide to the most important and interesting stories, analysis and insights. Sign up to The Sydney Morning Herald’s newsletter here, The Age’s here, Brisbane Times’ here, and WAtoday’s here.