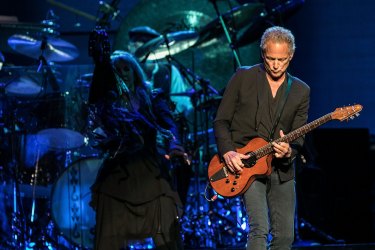 Sometimes the soap opera threatens to obscure the music. Case in point: Fleetwood Mac. The drugs, the affairs, the infighting, the walkouts and the reconciliations have become part of the band narrative, most recently in 2018 when, after increasing tensions in the group, Lindsey Buckingham was fired and replaced with Neil Finn and Mike Campbell for live shows. He’s taken his ball, gone home and made his first solo album in a decade.

Buckingham was always the weirdly shaped peg in the Mac machine while they helped create the ’70s US West Coast FM-rock universe. When he was given free rein on the band’s 1979 opus Tusk, the world discovered he was more enamoured with the left-field experimentation of Brian Wilson or Todd Rundgren: mercurial musicians and maverick producers with highly individual visions of how songs should sound.

This self-titled disc softly treads the same ground he has been covering for a while now – close-miked guitar played in his distinctive finger-picked style, lead vocals in his high, breathy register, layers of gossamer harmonies and beats that twitch and fidget. Case in point is first single I Don’t Mind, a sparkly wisp of a thing that rhymes willow with pillow and broken arrow with straight and narrow, while you’re left wondering how it might sound with Mick Fleetwood providing a big beat and Stevie Nicks cutting through with her white-winged dove vocals.

Remember, this is a man whose best-known solo hit, 1981’s Trouble, was a Vaseline-lensed soft-rock song he introduced with a repeated “two, a-three, a-four” count-in as if he was imitating Cookie Monster. Buckingham shoots for The Everly Brothers on the echo-laden Blind Love and constructs an aural Venn diagram where Paul Simon and Roy Orbison intersect on Time, but there’s a compressed and boxy aura around the production, while Swan Song threatens motion sickness with the strobe-like effect of fluttering Spanish guitars rubbing up against a beat with a case of the jitters.

The solo in On the Wrong Side proves he can still pull off the licks with ease, even if the song’s thin sound doesn’t match his virtuosity. Is it wrong to wish Buckingham would let it hang out again and build on the legacy of Go Your Own Way, a song that rocked and shimmered so majestically? Maybe that’s a place he no longer wishes to revisit, but these songs suggest yet another Mac reconciliation could be in order. BARRY DIVOLA

Ever since she formed a high school band with a blonde Queensland up-and-comer named Keith Urban, good people have gravitated to Sherry Rich. In the late 1980s she was part of Girl Monstar, an all-woman group inspired by The Runaways, best known for 1989’s Surfing on a Wave of Love. Then in 1997 much of Wilco served as her backing band when she toured the excellent album Sherry Rich & Courtesy Move. She has also worked with Americana great Buddy Miller. Melbourne-based Rich’s provocatively titled third solo album – she’s reclaimed the Flying V guitar for women of music everywhere – is a handy reminder of her twangy, melodic knack and ability to cast a musical spell. The slow-burning Like Nothing Ever Happened is so entrancing you can almost overlook her heartache and regret. Almost. Life Goes On has a similarly deceptive quality: break-up songs aren’t supposed to lift your spirits like this. And when, during Walk in the Sun, Rich casts this daydream – “I want to rent a caravan/start a Beach Boys cover band/and drive down the Great Ocean Road” – I forgot all about the pandemic for a few sweet minutes. Gotta love that. JEFF APTER

I recently called Arthur Grumiaux the finest violinist of his generation. His successor as the Franco-Belgian school’s leading exponent is Hilary Hahn, who, at 41, has already been performing for three decades. She exemplifies the same virtues of perfect intonation, clarity of articulation, clean, seamless legato and pure, gorgeous sound, all marvellously displayed here. The works are Chausson’s Poeme (written for the school’s most famous member, Ysaye), Prokofiev’s first violin concerto and two world premieres in the guise of serenades composed by Finland’s Einojuhani Rautavaara for these players. The second was completed after his 2016 death by his pupil Kalevi Aho. The first serenade, Pour mon amour, is lushly lyrical, set against a wall of strings. The second, Pour la vie, is more mysterious; constantly shifting. The Prokofiev is ferociously challenging, but Hahn makes it seem easy, such is her control and articulation. Her clarity and sense of colour and line make this a truly memorable account. Similarly, it’s hard to envisage a better performance of Poeme. She’s superbly and idiomatically accompanied by the Orchestre Philharmonique de Radio France and Mikko Franck. BARNEY ZWARTZ

THE WATCHLIST
Find out the next TV, streaming series and movies to add to your must-sees. Get The Watchlist delivered every Thursday.