Greens senator Lidia Thorpe has apologised for comments to a Liberal senator who interpreted them as a slur against her son who has autism.

In a fiery debate in the Senate on Wednesday night the Victorian Greens senator told NSW Liberal senator Hollie Hughes that “at least I keep my legs shut”. Senator Thorpe later said the comment was a reference to her seeing something that “disturbed me”. 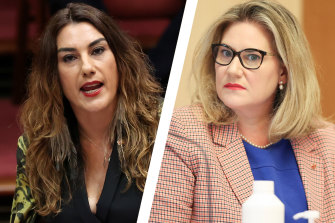 But Senator Hughes said on Thursday morning, “What I took from it, what a number of my colleagues from across the chamber, Liberal, Labor, crossbenchers, was had I kept my legs shut [then] I wouldn’t have a child with autism”.

“Honestly, I am dumbfounded that someone would say, would that suggest that. I can take it, have a go at me all you want to, I could not care less. But when someone invokes someone’s child, I think they have crossed a line.”

The incident occurred at about 7.30pm on Wednesday night, hours after senators Hughes and Thorpe had an angry exchange over disability and Aboriginal deaths in custody.

At about 3pm, Senator Thorpe interjected in an answer by the Minister for the National Disability Insurance Scheme, Linda Reynolds, to highlight that in the last eight hours two Indigenous women had died in custody.

Senator Hughes saw that as highly inappropriate given the debate on International Day of People with Disability.

As debate wore on into the evening, senators Hughes and Thorpe got into an argument on the sidelines of debate in the Senate.

Senator Hughes brought up Senator Thorpe’s earlier interjection and said it was a “disgrace”.

It was at that point, several Senate sources confirmed, that Senator Thorpe said, “At least I keep my legs shut”.

Senator Thorpe has not denied using that phrase.

Liberal senator Ben Small then stood up to raise a point of order, saying that Senator Thorpe had made an outrageous statement about Senator Hughes.

“In the scheme of disgusting statements made in this chamber, that surely ranks at the top of them,” Senator Small said.

Senator Thorpe responded, “I just got a view of something over there that disturbed me. But I’m happy to retract.”

She later gave a longer apology, saying that she unreservedly apologised to Senator Hughes.

“That won’t happen again. So I apologise to the senator

Speaking to journalists on Thursday, Senator Hughes said she accepted the apology but also called for Senator Thorpe to lose her position in the Senate.

Greens leader Adam Bandt’s office was contacted for comment but did not respond.

The furore comes in the same week that Sex Discrimination Commissioner Kate Jenkins released her report on workplace bullying, harassment and assaults in federal politics.