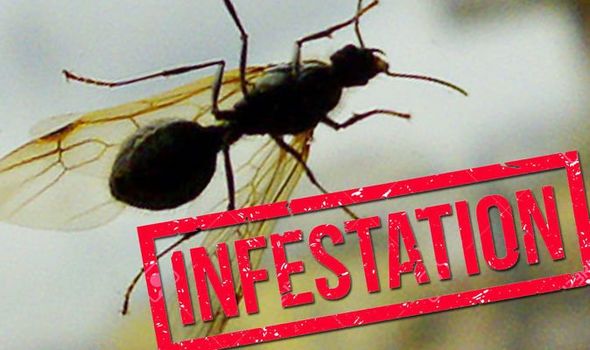 Flying ant day is the time of the year when queen ants begin to search for new homes.

They fly out of their nests on nuptial flights with male ants in tow.

Queen ants mate with their many male subjects during the flight in preparation to create a new colony.

While it is a pivotal moment in the life of an ant, it can be irritating if it takes place near your home.

How to get rid of ants: Flying Ant Day sees in house infestations at a high

Experts have offered advice to as how you can deal with flying ants in your home.

David Cross, Head of the Technical Training Academy, Rentokil Pest Control told Express.co.uk how to keep the insects under control.

He said: “While the warm weather is a welcome change to the recent spate of showers across the country, the rising temperatures of late June to early July can also cause an unwelcome increase in swarms of flying ants – giving rise to what’s now commonly known as Flying Ant Day.

“When the temperature goes past a certain point, large females and smaller males that have developed in neighbouring nests of black garden ants take to the air in huge numbers and initiate mating flights. After mating the females will start a new colony, while the males will die.”

“While garden ants tend to live outside in nutrient-rich, moist environments, they frequently make their way indoors in search of food and additional places to nest, therefore a regular, proactive cleaning regime plays an important role in maintaining a hygienic environment and avoiding ant infestations.”

How to get rid of flying ants

David said: “It is imperative that spillages and messes are cleaned up as soon as possible, and that all food and rubbish is securely sealed in containers.

“Be sure to clean up sticky messes, and don’t leave washing up to fester. Also keep surfaces clean and clear of food, so there won’t be anything to attract them indoors.” 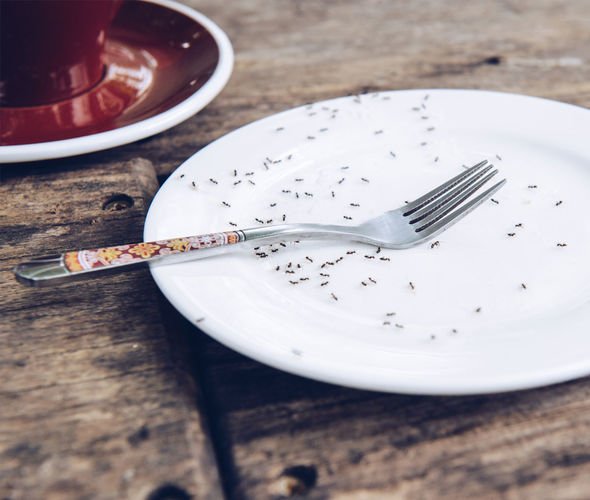 “If swarms of flying ants persist despite DIY fixes, effective control and recurrence prevention can be ensured via professional help,” David said.

“Pest control experts can effectively stop ants entering the property by sealing access points such as cracks and crevices in doors, helping stop the pests becoming a nuisance as the weather continues to get warmer.”

How to get rid of moths is another frequent query made by Britons.

According to the British Pest Control Association, there are roughly 165,000 species in the world, and many species of moths are household pests. The tiny insects enter the home easily through doors or windows. And although small – they tend to be around 2mm, however, can be as large as 300mm across – once in the house, these destructive pests can cause serious damage to food and fabrics.

Ants have the ability to carry between 10 and 50 times their own body weight, though the amount an ant can carry depends on the species. The Asian weaver ant, for example, can lift 100 times its own mass. This strength is a result of their small size, meaning that they have a greater cross-sectional area relative to their body size and can produce more force.

Due to their small size, ants don’t have the room to accommodate a complex respiratory system.

Ants breathe in oxygen through spiracles which are a series of holes located around the sides of their bodies. The spiracles are connected through a network of tubes which help distribute the oxygen to almost every cell in their body. An ants movement helps the oxygen to circulate through the tubes, with the released carbon dioxide exiting through said tubes as well.

Ants use the vibrations in the ground to hear, picking them up in the subgenual organ which is located below the knee.

There are a lot of ants in the world

With the exception of Antarctica, the Arctic, and a handful of islands, there is at least one native species of ant found on every continent. Scientists estimate that there are one million ants per every human. 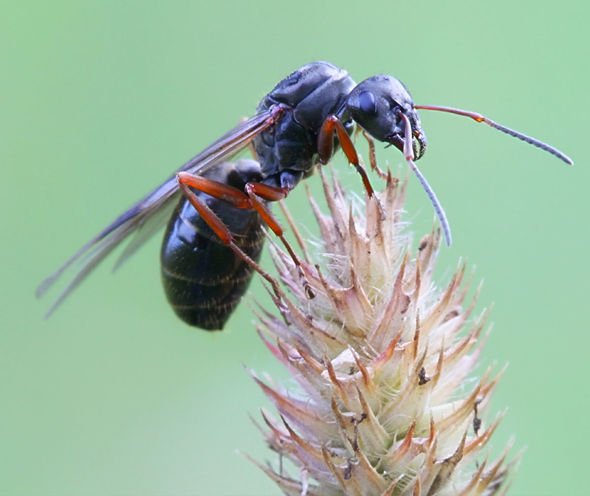 Some ant species are Asexual

Rather than going down the traditional route of reproduction, some Amazonian ants have taken to reproduce via cloning. It is reported that the queen ants copy themselves to genetically produce daughters, resulting in a colony with no male ants.

You may be thinking “what?!”. But it’s true, besides humans, ants are the only creatures which will farm other creatures.

Just like we raise cows, sheep, pigs, chicken, and fish in order to obtain a food source, ants will do the same with other insects. The most common occurrence of this is with aphids.

Ants will protect aphids from natural predators, and shelter them in their nests from heavy rain showers in order to gain a constant supply of honeydew.

That’s right ants have two stomachs, and it’s not because they are greedy. One of their stomachs is for holding food for their own consumption, whilst the second one is to hold food to be shared with other ants.

This process is known as trophallaxis and allows an ant colony to work extremely efficiently. It allows for the ants who forage for food to feed those which stay behind and tend to the duties of the queen and the nest.

This may sound strange but hear me out. Some species of ant, such as the Polyergus Lucidus are known as slave-making ants. They invade neighbouring ant colonies, capturing its inhabitants and forcing them to work for them, this process is known as ‘slave raiding’.

Slave-making ants are specialized to parasite a single species or a group of related species which are often close relatives to them. The captured ants will work as if they were in their own colony, while the slave-making workers will only concentrate on replenishing their labour force.

Ants are as old as dinosaurs

A study from Harvard and Florida State Universities discovered that ants first rose during the Cretaceous period around 130 million years ago! They have survived the Cretaceous-Tertiary (K/T extinction) which killed the dinosaurs as well as the ice age.