The most noteworthy moment in The Many Saints of Newark, the new The Sopranos prequel movie, isn’t the opening cameo from character Christopher Moltisanti from beyond the grave, or when the series’ familiar “Woke up this morning…” musical refrain cuts in on a young Tony Soprano, but rather the film’s closing credits.

In an end-credits scene tangentially related to the story we’ve watched, the film explicitly points towards a follow-up, an instant sequel to the prequel. I never thought I’d see The Sopranos, the revered TV series still widely considered the greatest of all time, taking its cues from the Marvel Cinematic Universe, but here we are. 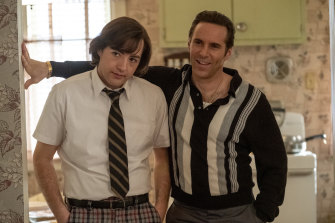 The scene puts a bow on the film’s – which was released simultaneously in cinemas and on HBO Max in the US and UK – reason for being. It’s not so much a passion project or even a necessary exploration of the origin stories that led to the series proper; it’s just another move in streaming’s endless quest for more subscribers, and proof that nothing is untouchable in the streaming wars.

The Sopranos creator and the film’s screenwriter David Chase confirmed as much in an interview on Marc Maron’s WTF podcast in September when the comedian asked him if the film, which is set amid the racial tension between Italian-Americans and African-Americans in New Jersey between 1967 to 1971, first came about as an idea detached from The Sopranos.

“It came because [studio] New Line approached me about ‘doing a Sopranos movie’,” Chase responded. “So that’s what happened, and that’s what we came up with.”

In another interview with The Hollywood Reporter this week, Chase also discussed his struggle with getting any other projects off the ground in the decade after The Sopranos finished.

“I guess the big-picture lesson for people is that you can literally make the greatest show of all time – and then even so, the same network is not going to just say, ‘I’ll take a chance on whatever you want to do next.’,” The Hollywood Reporter’s Scott Feinberg remarked to Chase.

Considering the ridiculous amounts of money streamers have thrown at proven IP like Seinfeld and Friends and, um The Exorcist, it’s not surprising that HBO and Warner Bros would find an opportunity to wring The Sopranos, one of their most beloved and enduring products (especially after its COVID-induced resurgence).

But does it not feel a bit depressing that The Sopranos is being subjected to the same calculated commercialism as, say, a Saved By the Bell? That a TV series that so powerfully shifted the possibilities of its medium, and that was handled with such integrity by Chase that even its finale refused to pander to viewers’ demands or network expectations, is now just another cog in the nostalgia money-spinning machine?

It’s the nature of the “attention economy”, says Dr Benjamin Nickl, a lecturer in comparative culture and popular entertainment at the University of Sydney, borrowing a concept from French cultural theorist Yves Citton’s Ecology of Attention.

“There’s a measurable, monetary value attached to clicks, views, likes and downloads; we literally pay attention,” he says. “But there’s only so much attention to go around.

“Hollywood knows that with a monster load of information and content channels available, including platforms like TikTok, they need to protect the things that already draw in audiences and guarantee views for their product.”

Echoing the ever-increasing appetite for reboots and origin stories, The Many Saints of Newark’s Muppet Babies take on The Sopranos’ characters – alongside teen Tony, the film includes goofy caricatures of younger faves like Paulie Walnuts, Artie Bucco and Silvio Dante – acts as an “anchor in this world of distraction,” Nickl says.

“These characters are beacons of attention and so they’re valued,” he says. “It goes back to the idea of nostalgia as guaranteed attention, and it’s quite clever. I’ve heard things like, ‘I’m not watching it ’cause I like it, but because I’m invested in it.’ People are already in there, so they stick around.”

The film also has its less superficial moments – a scene of young Tony looking out his bedroom window at the race riots sending plumes of smoke into the New Jersey night sky feels like a memory lifted straight from Chase’s consciousness – that point to a more rewarding experience beyond a mere Sopranos nostalgia trip.

But in an ambivalent development since The Many Saints of Newark’s streaming success in the US, Chase signed a “massive” five-year HBO deal, opening the door to “potentially more Sopranos”. While I’d hope HBO give Chase leeway to tackle something else, Nickl finds something intriguing in the “memory industry” cycle that’s currently fuelling our entertainment.

“Fans can easily sniff out the artifice of something that’s purely there for the money grab,” he says. “But you just hope that each generation that rediscovers it can make it it’s own authentic thing, and then you get all these different experiences of The Sopranos finding a way of talking to each other.”