It was, of course, Don Chipp who proclaimed, in 1980, that a vote for his party would help to “keep the bastards honest”. In other words, while he knew the Democrats could never win government, they could temper the excesses of the major parties.

Today, that role falls to the independent crossbenchers, Zali Steggall, Helen Haines, Andrew Wilkie and Rebekha Sharkie, who, James Massola reports, “could end up kingmakers” given predicted swings against the Morrison government at next year’s federal election. 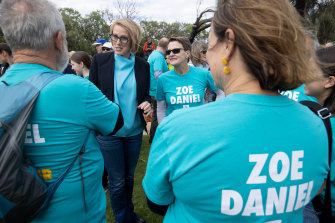 Independent candidate Zoe Daniel launches her campaign for the seat of Goldstein in Sandringham.Credit:Simon Schluter

That prospect only increases with the emergence of dozens more independent candidates around the country fronting local campaigns, such as the “Vote Angus Out” push against Energy Minister Angus Taylor in the NSW seat of Hume, and the assorted “Voices of” and “Voices for” community groups targeting Coalition-held seats.

In recent weeks, we have reported on, among others, former ABC journalist Zoe Daniel in the Melbourne seat of Goldstein, held by Liberal Tim Wilson. The director of the Royal Children’s Hospital’s department of neurology, Monique Ryan, will take on the most senior Liberal in Victoria, Treasurer Josh Frydenberg, in Kooyong. Health public servant Claire Boardman is standing in Flinders, being vacated by Health Minister Greg Hunt.

All generally call for greater action on climate change, a strong federal integrity commission and improvements in the treatment of women.

They may prove a flash in the pan: it is historically very unlikely for independents to win lower house seats.

Yet the movement – if we call it that – is clearly gathering momentum, backed by climate campaigner Simon Holmes a Court’s Climate 200 group, which is offering funding from its $6 million-plus war chest to candidates who strongly support action on climate change, gender and government integrity.

The Morrison government has certainly created an opportunity for them, with a climate pledge that lacked details, dragging its feet on bullying and harassment allegations at Parliament House and a proposal for a federal anti-corruption body that was widely panned as toothless. The current crossbenchers are already indicating they will continue to push the government on these issues and more.

The (slim) risk is that independents enjoy so much success that they can hold the balance of power. We saw shades of that here in Victoria’s upper house when the government cut deals with its crossbenchers to pass the pandemic bill.

It’s unlikely, given the solid performance to date of independents such as Zali Steggall, that more crossbenchers would cause “chaos”, as Deputy Prime Minister Barnaby Joyce claimed last week. This masthead does agree with Mr Joyce, however, that in the event of a hung Parliament, we are entitled to know which major party the independents would support to form government.

Voters equally have a right to know what the independents would do about climate change above and beyond pledges by the major parties, particularly those with backing from Climate 200. As James Massola reports, Claire Boardman would not reveal whether she supported a 2030 emissions reduction target of 26-28 per cent (the Liberal target), 43 per cent (Labor’s target) or 70 per cent (the Greens target). Nor would she say whether she would back a Liberal or Labor prime minister. Neither would Monique Ryan be drawn on policy specifics, describing herself as a political “cleanskin”.

Granted, the prospect of sending “ordinary” Australians to Canberra to shake things up has a certain anti-authoritarian romance to it. But political naivety will only take you so far. Once the campaign begins in earnest, the independents must convince us that they have the skills and wherewithal to thrive in federal Parliament, to act on their promises, to make sensible, transparent decisions and, let’s not forget, to adequately represent their electorates on the ground.