After hours of conflicting statements, a spokesman from Liberty University said late Monday that Jerry Falwell Jr. had agreed to resign as president of the evangelical Virginia college and from the school’s board of directors, but “following media reports about the resignation, withdrew it.”

According to spokesman Scott Lamb, Falwell agreed to resign immediately but then instructed his attorneys to not tender the letter for immediate resignation. The full board of directors will meet Tuesday.

Earlier Monday, a senior official at Liberty University told CBS News that members of the school’s board “have been in discussion” with Falwell and expect to make a statement on Tuesday.

Falwell has been on leave from Liberty University since earlier this month after he posted a photo on his Instagram account with his pants unzipped, holding a beer and with his arm around a pregnant woman whose shorts were also unzipped and belly exposed. While Falwell apologized and said it was from a “costume party,” Liberty University bars alcohol consumption and has a strict code of conduct.

Falwell said earlier Monday that he was seeking help for the emotional toll of his wife’s alleged affair.

While the school on Monday said a statement was forthcoming on Falwell, Virginia Business reported he has not agreed to leave the school permanently.

Falwell issued a statement to the Washington Examiner on Sunday night denying any relationship with Granda, a former pool attendant at the Fontainebleau Hotel in Miami Beach. Falwell said his wife had an affair with Granda and Granda was now trying to extort the couple. Granda denied extorting the couple, telling Reuters that he was trying to end the business partnership with the Falwells.

“Becki had an inappropriate personal relationship with this person, something in which I was not involved,” Falwell told the Examiner.

Granda told Reuters he was 20 years old when he became involved with the Falwells. 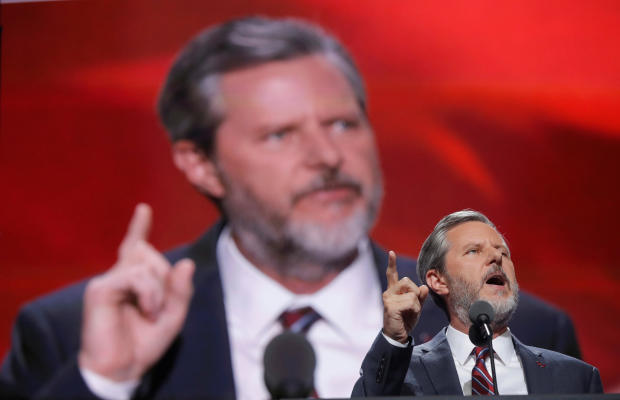 Falwell took over at the helm of Liberty University from his father and namesake, who founded the school, in 2007. While never a pastor like his father, he still held the university to the strict code of conduct, which states “sexual relations outside of a biblically ordained marriage between a natural-born man and a natural-born woman are not permissible at Liberty University.”

Evangelical support has been key for Mr. Trump, and Cohen said that before Falwell’s endorsement, “none of the evangelicals wanted to support Trump.” Mr. Trump has spoken several times at Liberty University and Falwell has defended Mr. Trump after some his biggest controversies.

Earlier this year, Falwell was widely criticized when he opted to keep Liberty University open despite the growing coronavirus pandemic.