Irish author Sally Rooney’s work polarises people. Reaction to the 2020 hit Normal People (Stan*), adapted from her second novel, was passionate yet divided. Those who loved it (count me in) relished its contemplative, sensual, gently paced tale of a heady teenage romance between affluent Marianne (Daisy Edgar-Jones) and working-class Connell (Paul Mescal) as the series followed them from high school in seaside Sligo to university in Dublin.

Those who weren’t seduced by its charms decried it as a slight and unduly protracted tale of adolescent angst, a dull account of a relationship between a couple of irritatingly self-absorbed and whiney navel-gazers. 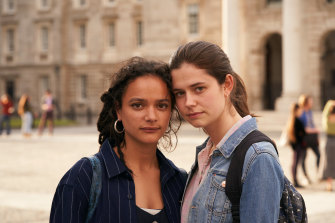 Based on Rooney’s 2017 debut novel, Conversations With Friends (Amazon Prime, from May 16), spans similar territory, albeit with some diversions. Its focus is a Dublin-based foursome. Frances (Alison Oliver) and Bobbi (Sasha Lane) are devoted friends from their school days. Now they’re college students, former lovers and collaborators who present spoken-word poetry. Following a performance, they meet Melissa (Jemima Kirke), an author who admiringly describes their work as “very sweet, but ruthless”. Subsequent online detection reveals that Melissa’s married to actor Nick (Joe Alwyn), whom sharp-eyed and sharp-tongued Frances describes in a text message to Bobbi as a “trophy husband”.

After the women go swimming together, Melissa invites the students home for a drink at her casually impressive house, where they meet Nick. The attraction between Frances and Nick is evident, despite the palpable discomfort that ensues after they’re left alone at the table as their more outgoing companions repair to the backyard for a smoke. Like Normal People, Conversations is loaded with terse, tense exchanges and awkward silences.

The new adaptation unmistakably comes from the same lineage as the previous production. It’s also made up of 12 half-hour episodes and has many of the same producers, as well as director Lenny Abrahamson, writer Alice Birch and costume designer Lorna Marie Mugan. 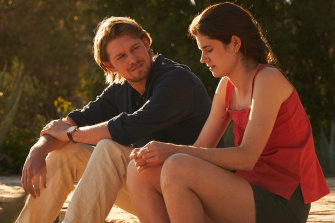 Watching the two series, or reading the books, one can detect Rooney honing her craft and her concerns. Again, there’s an uncomfortable affair driven by sexual desire and there are evident economic differences between Melissa and Nick and the financially constrained college students. And again there’s a European vacation, this time a fourth-episode trip to coastal Croatia (changed from the French countryside in the book). Perhaps anticipating the criticism that it’s another dive into the petty problems of privileged white folk is the casting of Bobbi as a black expat New Yorker.

There’s also a deliberately unhurried pace, allowing viewers time to absorb the nuances of the relationships, to focus on the characters’ expressions, gestures and silences. Much of the drama is unspoken. There’s forensic attention to interior worlds, to the roiling thoughts and feelings beneath the surface, the desires, tensions, jealousies and resentments. There’s welcome space for the actors to convey emotion that isn’t expressed through dialogue. 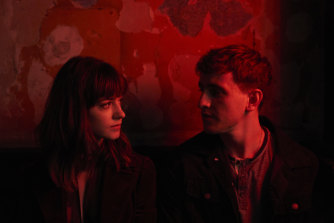 Normal People was loaded with tense exchanges and awkward silences as it charted the relationship between Marianne (Daisy Edgar-Jones) and Connell (Paul Mescal).Credit:Stan

Abrahamson (Room), who directs the early episodes, is skilled at making his actors shine while evoking the intimacy and intensity that the story requires. Like Normal People, Conversations is about the messiness of human relationships, the knotty entanglements and complexities.

And like Normal People’s Marianne, Frances emerges as a watchful young woman who’s developed a steely spine but is also fragile. While Marianne is a virgin who discovers the joy of sex with Connell, Frances’ affair with Nick represents her first sexual experience with a man. In both cases, though for different reasons, the affairs are kept secret.

Comparisons are hard to resist as, in casting newcomer Oliver, the producers have chosen an actress of a similar physical type to Edgar-Jones: a slim, delicate brunette with large liquid eyes and a magnetic screen presence.

However the new series lacks the potency and the aching melancholy created by the Marianne-Connell union. The central relationship here is the friendship between Frances and Bobbi, while the lovers are the more reserved members of the quartet. In the five episodes available for preview, Conversations With Friends doesn’t achieve the stirring heights of its predecessor.

While admirers of Normal People might still find elements to enjoy, those who found its predecessor slow and indulgent are likely to find Conversations With Friends interminable.

Conversations with Friends launches on Amazon Prime on May 16.

* Stan is owned by Nine, the owner of this masthead.