Prime Minister Scott Morrison will give the Nationals more time to make a crucial decision on climate change policy in a bid to secure a deal to cut greenhouse gas emissions to net zero by 2050, in the hope he can commit to the target at a United Nations summit in Glasgow on November 1.

Mr Morrison is willing to take more time next week to finalise the policy amid signs of a deadlock among the Nationals on Sunday when party leader and Deputy Prime Minister Barnaby Joyce asks his colleagues to decide whether to accept the target. 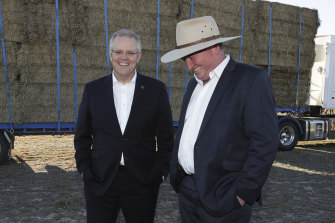 Prime Minister Scott Morrison will give Barnaby Joyce the Nationals more time to make a crucial decision on climate change policy in a bid to secure a deal to cut greenhouse gas emissions to net zero by 2050.Credit:Alex Ellinghausen

The Prime Minister ended weeks of doubts over his plans by revealing on Friday he would attend the Glasgow summit, just as Queen Elizabeth expressed frustration about leaders who were not going and US climate envoy John Kerry said the event might not make enough progress.

With Labor and the Greens calling for a stronger Australian pledge at the summit, a new report from climate scientist Bill Hare shows the nation could upgrade its 2030 target to 38 per cent because state government policies were doing most of the work without federal action.

Mr Morrison said he would finalise the climate package “over the next couple of weeks” before attending the UN gathering but made it clear he regarded net zero as government policy already, subject to a discussion about the 2050 deadline.

“I simply say to everyone that net zero was an outcome that I outlined at the beginning of this year,” he said. “The challenge is not about the if and the when, the challenge is about the how.”

Nationals who oppose stronger action on climate change are determined to drag out the debate in a bid to stop the 2050 target becoming federal policy after the Nationals meet on Sunday, the Liberals meet on Monday morning and MPs from both parties hold a joint party room meeting on Tuesday.

But the most senior conservative figure in the Liberal party room, Defence Minister Peter Dutton, swung behind the target in a significant move on Friday that confirms a majority for the policy inside federal cabinet.

Mr Dutton said “I want net zero by 2050” as long as it was done in a way that did not hurt workers in mining and industrial centres, particularly in his home state of Queensland.

“We want to see electric vehicles, we want to see renewables. We want to see industries that are sustainable, we don’t want to destroy jobs and our economy,” he said on the Nine Network.

A senior Nationals MP, Darren Chester, will also back the push for net zero by rejoining the party room for its Sunday discussion after he took a break from the group last month due to his frustrations with the leadership.

Mr Chester, a cabinet minister until Mr Joyce returned to the leadership in June, has told colleagues he believes the net zero meeting is too important to miss despite his other reservations.

The new research by Dr Hare and colleagues at Climate Analytics shows the government can already do better than its target to reduce emissions by 26 to 28 per cent by 2030 on 2005 levels, although the progress so far is mostly due to state policies.

“The federal government’s claim that it is ‘meeting and beating’ its targets is a falsehood because it is doing little but claiming credit from the very hard work of Australia’s states and territories,” the report concludes.

Australia could cut emissions by 50 per cent by 2030, in line with the goals set for the Glasgow summit, with policies to boost renewables and step up the use of electric cars, but the report says slower action in the electricity grid adds to the burden in farming and manufacturing.

Dr Hare, the head of Climate Analytics and adjunct professor at Murdoch University, was a lead author for the Intergovernmental Panel on Climate Change (IPCC) advising the UN. The new report was commissioned by the Australian Conservation Foundation.

The Nationals party room has 20 members and six of them, including Resources Minister Keith Pitt and his predecessor Matt Canavan, have expressed strong concerns or total opposition to net zero by 2050, while there is also a small group of opponents among the 90 members of the Liberal party room (including MPs Senators).

While this suggests majority support for the target in the Coalition party room as well as federal cabinet, Mr Morrison is seeking to avoid a clash with the Nationals and will not need a vote in Parliament to set the target as government policy.

Mr Morrison confirmed his attendance at Glasgow through a message from his department to UK officials on Thursday night, before media reports revealed Queen Elizabeth said it was “irritating” that leaders were not coming.

In a worrying signs for the event, Chinese President Xi Jinping will not attend and Russian President Vladimir Putin said he might not go. China produces 26 per cent of the world’s carbon emissions, while the US produces 13 per cent, Russia 5 per cent and Australia 1.3 per cent, according to the World Resources Institute, a non-profit group.

Mr Kerry said the Glasgow summit would reveal who was doing their “fair share” but he acknowledged the commitments would not meet the goal of keeping the rise in global temperatures at or below 1.5 degrees.

“It would be wonderful if everybody came and everybody hit the 1.5 degrees mark now,” he told the Associated Press. “That would be terrific. But some countries just don’t have the energy mix yet that allows them to do that.”