One Republic frontman Ryan Tedder says it's a "pressure cooker" to play live sporting events but he and the band are excited to rock the NRL grand final.

Tedder said the band had played some huge sporting events in the past and were looking forward to adding the NRL grand final to their list. 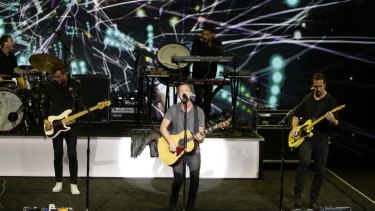 One Republic performing in San Francisco.Credit:AP

"We played pre-game at the Super Bowl kick off in the US, basketball all-star games and I sang the national anthem at the World Series,” he said.

Tedder said there was extra pressure that comes with playing a huge televised sporting event.

"You are on a very finite amount of time, it is televised so it is kind of a pressure cooker and anything could go wrong … you never know what is going to happen," he said.

The band will play its hits Counting Stars and Something I Need but the highlight will be a special performance of Beyonce's global hit Halo with Australian artist Thandi Phoenix joining the group for that song.

Tedder, who has worked with the likes of Adele, Camila Cabello, Ed Sheeran, Pink, U2, Taylor Swift, wrote the smash hit Halo for Beyonce.

"I remember when I emailed it to Beyonce I didn't really hold my breath … Most artists I work with I write with them and are in the room with them but Beyonce is one of the few where you are kind of just submit the song," he said.

"I'm not, like, trying to boost our performance of it and hopefully I'm not jinxing it, but I sing the shit out of Halo so I don't feel pressure about it at all."

He said he had been reluctant to perform hits he had written for other people in the past but had taken some inspiration from Pharrell.

"Pharrell performs and half of his set are songs he has written for other people and for whatever reason I was not inclined to do that for the longest time but now I finally feel OK with it," Tedder said.

Despite coming from the US, where rugby league isn't one of the most popular sports, Tedder . knows plenty about the game.

"I have watched a lot of rugby league and it is so physical it is one of the most impressive athletic things," he said, admitting he had watched games with his friends while spending time in Australia.

One Republic will headline the entertainment at ANZ Stadium on Sunday when the Sydney Roosters take on the Canberra Raiders.