Brant shares a photo of his mother Stephanie Seymour in mourning and celebrity tributes from Tiffany Trump and Linda Evangelista.

The Brant family said goodbye to 24-year-old Harry Brant on Thursday, following the model and socialite’s death from an accidental drug overdose earlier this week.

Harry was the son of supermodel Stephanie Seymour and her husband, billionaire Peter M. Brant, who were seen at their child’s memorial in a photo shared to Peter Brant II’s Instagram Story. The two were pictured ringing a bell during the ceremony, wearing black while surrounded by rose petals.

Brant II captioned the photo with a broken heart emoji, also sharing a picture of an urn etched with Harry’s initials. 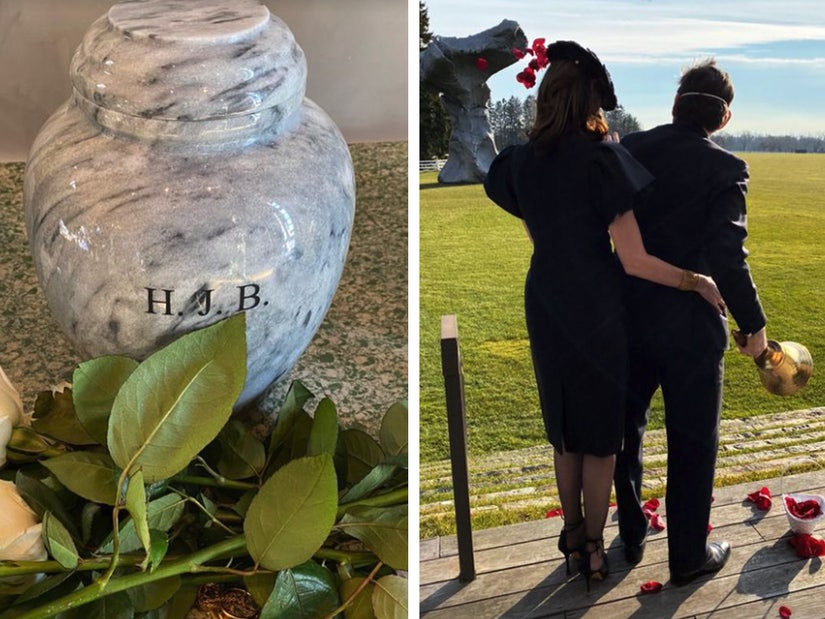 “Today we lay to rest, and honor the life of my brother, a true angel of light, an extraordinarily unique soul unlike any who have come before,” Peter wrote in another post on his Instagram feed, alongside a photo of Harry with fellow socialite Gaia Jacquet-Matisse, great-great-granddaughter of famed French painter Henri Matisse (below).

“This photo taken on his last day, shows the eternal beauty he will forever hold,” Peter continued.

“It is impossible to express the devastation I feel for the loss of one with whom I shared not only a lifetime of beautiful memories, but with one who cared so deeply for my own happiness, was so devoted to my personal comfort,” he wrote. “It is the loss not only of a brother, but of a best friend, my other half. My heart shatters to think we will never see that dear sweet face again.”

“Peter. I’m so sorry for your loss,” Mischa Barton commented on the post. “Missing him deeply already. May he rest in eternal peace.”

“Broken hearts everywhere what a beautiful soul,” added Bella Thorne, while Lily Aldridge said she was “sending all my love … I’m so very sorry for your loss.”

“He was my everything. My partner in every crime. His bedroom is now a shrine to our fallen brother,” Peter continued in a series of photos shared to his Story. He also asked for his friends, family and followers to “please light a candle for Harry” as part of a tribute, with many sharing pictures of their personal vigils on social media.

Tiffany Trump, Linda Evangelista and Poppy Delevingne were among the many who participated, with Peter re-posting their candle tributes to his page.

“We will forever be saddened that his life was cut short by this devastating disease,” the family said in a statement to The New York Times after his death. “He achieved a lot in his 24 years, but we will never get the chance to see how much more Harry could have done.”

The socialite could often be seen at the side of his older brother Peter at various fashion and other red carpet events, including a Met Gala appearance at just 16, or hanging with some of Hollywood’s biggest stars over the years.

“Harry was not just our son,” continued the statement from his parents. “He was also a wonderful brother, loving grandson, favorite uncle and a caring friend. He was a creative, loving and powerful soul that brought light into so many people’s hearts. He was truly a beautiful person inside and out.”

Both Harry and Peter Jr. made names for themselves pushing the boundaries between traditional male and female beauty standards and fashion for years. In more recent years, they co-founded a unisex line of makeup with MAC, releasing collections in 2015 and ’16.

Aside from his work as a columnist for Interview Magazine, Harry also dabbled in his mother’s line of work, doing some modeling work for the likes of Italian Vogue and Balmain. He’d hoped to take on a much larger creative role at Interview in the near future.

If you or someone you know is struggling with addiction, please contact the SAMHSA substance abuse helpline at 1-800-662-HELP.