This is the moment a pregnant mother-of-one realises that she won’t be able to move out of her cramped accommodation, and move into her dream home by the time her baby is born.

Ibby, 29, had been fighting so hard to beat her due date that her mother even asked her to ‘slow down’ – and realising that she still had no gas, kitchen, bathroom or radiators with four weeks to go, she nearly broke down.

Ibby, 29, lived with her husband and daughter at her mother’s house but dreamed of having more independence by before buying a dilapidated £1 house on the Webster Triangle – her first family home. The scheme by Liverpool City Council offered the mother her only chance to own her own home, as she described having a mortgage or borrowing money as against her religion as a Muslim.

But Ibby is devastated when she learns she is unable to move into the property ahead of her due-date, meaning she will have to balance life with a newborn baby and renovating the property.

She opens up about the project on tonight’s The £1 Houses: Britain’s Cheapest Street on Channel 4 and gets visibly upset when she realises her mammoth task, saying she didn’t think ‘it would come this quick’.

Checking the progress of the house, she’s overjoyed to see plugs and light, but there is still ‘no gas, no kitchen, no bathroom, no radiators.’

Ibby admitted: ‘I am panicking. I am a bit worried now. Okay Ibby, you’re due in four weeks, you’ve really got no time – I didn’t expect it to come this quick. 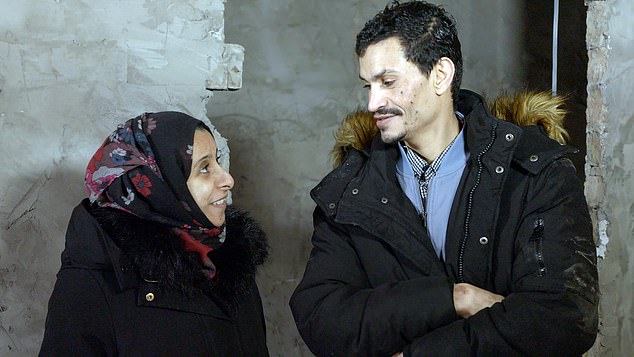 Earlier in the show her mother could be seen pleading with her to ‘slow down’ and told her daughter that the best option would be to have the child in the safety of her home.

Towards the end of the episode she agrees, saying: ‘I think the sensible decision is to have the baby at my mum’s.’

‘I’m gonna have to deal with the stress of a newborn baby and doing up the house – it’s too much for me to do.’ 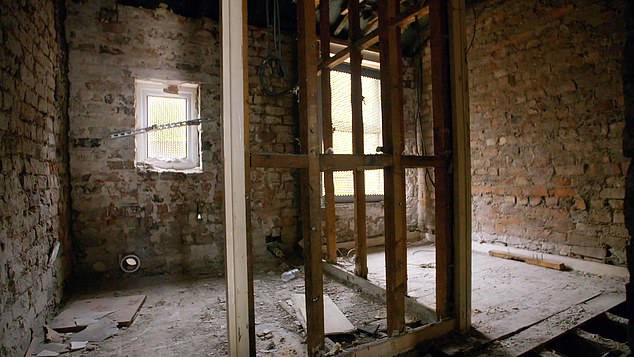 With four weeks to go until Ibby’s due date, the bathroom, kitchen, locks, electricity and doors all have to be fitted

In 2013, over a hundred terraced houses stood derelict in the Webster Triangle, a run-down area of Liverpool riddled with crime, that straddles the Wavertree and Toxteth boroughs.

As part of a renovation project in the area, they were handed over to first time buyers for one pound each.

But five years into the project, the £1 house scheme is way behind schedule – and just 34 houses of the 138 in the project have been finished. 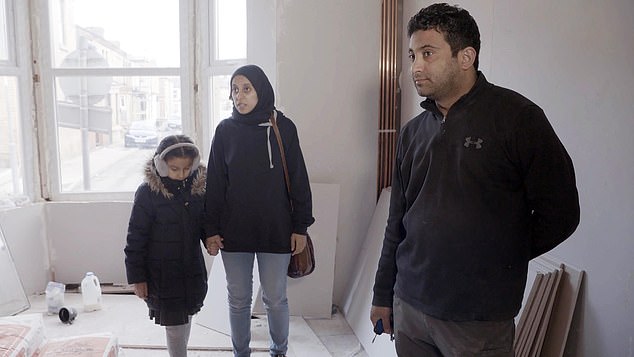 Ibby, pictured with the builder Yousef, and her daughter in her new home in Liverpool

Ibby revealed: ‘I need to get into my house for the baby and I’m just so stressed about it. I just want it done before the baby comes.’

Her project has faced multiple set-backs, after she discovered the cellar was filled with ground water.

She said:  ‘The cellar was a big reason I fought for this property so much, so it was heart-breaking.’

The expectant mother has always lived with her own family, and admits she is craving more independence. 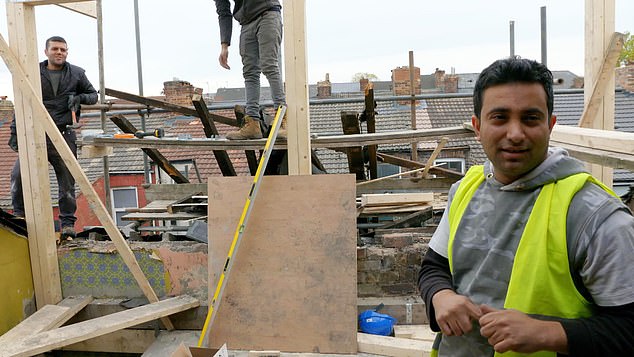 She said:’ I just want to get in the house, we’ll be together.’

The plastering was nearly complete, but her builder was under pressure to get the property finished on time.

With five weeks to go until Ibby’s due date, the bathroom, kitchen, locks, electricity and doors all had to be fitted.

The expectant mother revealed: ‘At this moment in time I am so optimistic, providing I don’t go early, yes I’ll be in before the baby is born.’

Meanwhile her builder Yousef was less sure, revealing that she will ‘maybe’ be able to move in before the baby arrives.

Yosef is working on three houses at once, but is feeling the pressure on Ibby’s home in particular. 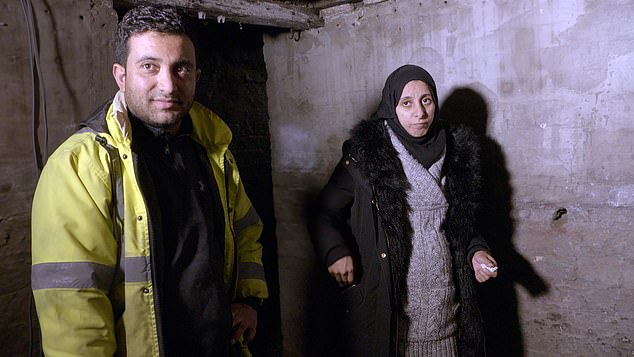 Ibby, pictured with builder Yousef, said she fought for her house because she had plans for its cellar (pictured) only for them to be scuppered upon the discovery of ground water there

He said: ‘It takes time – sometimes we have to delay things, because you’re taking all the house out and doing it from scratch.’

Ibby revealed: ‘I don’t wanna be in hospital in labour and not in the house. It’s got to be push, push and get everything done.’

But her mother Faizier said: ‘Ibby is very determined and I can understand she’s anxious to get into the house. But I can’t see it.’

She warned her daughter: ‘You’ve really, really got to slow down.’

‘You do know that the likelihood is you’ll have the baby in our house. The plan is new house, new baby. But not just yet.’

Liverpool City Council’s £1 Home Scheme or Homes for a Pound is an initiative to bring around 6,000 empty houses in the city back into use by helping first time buyers get on the property ladder.

The properties are released in phases of roughly 40 homes per time and applicants have to undergo a bidding process.

To be eligible, applicants have to live or work in Liverpool and must commit to staying in the property for five years. They must also be able to demonstrate they have enough savings behind them to spend on renovations.

A total of one hundred families have now been allocated a property, with a further 350 families being considered for one.