Mental ill-health and suicide in Australia costs the country up to $70 billion a year and the cost of disability and early death due to it is estimated to cost a further $151 billion.

The economic harm of the country's poor mental health has been set out in stark terms in the Productivity Commission's report on mental health. 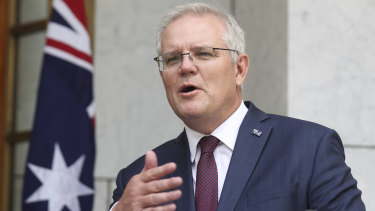 The report was released by the federal government on Tuesday, more than five months after it was received. Prime Minister Scott Morrison said it was the "most comprehensive report of its kind" ever produced in Australia.

"It is well worth the read for all of us who care about the mental health of our fellow Australians," he said from Melbourne on Tuesday afternoon.

"It's not easy reading, but despite our efforts, people are still falling through the cracks.

"This is first and foremost a health issue, but health issues have very significant and serious economic consequences as well."

One in five people experience mental illness every year, and half of all Australians will be diagnosed with a mental health condition over their lifetime.

Every year 65,000 Australians attempt suicide, and last year 3300 died by suicide, he said.

Mr Morrison said the governmnent's focus was on prevention and early intervention, particularly for young people.

The report, which runs to more than 1200 pages, was handed to the government on June 30 this year. The draft report was released in October 2019.