Joe and Melissa Gorga reached yet another breaking point with Teresa Giudice during the March 31 episode of ‘RHONJ’.

This week’s new episode of The Real Housewives of New Jersey picked up right where the drama left off last week — just after Jackie Goldschneider asked Teresa Giudice whether she got her confidence “in jail”. Teresa, of course, got offended, but instead of lashing out at Jackie, she went after her brother, Joe Gorga, and his wife, Melissa, for not defending her.

“Joe, what the hell? You don’t f***ing stick up for your sister?” Teresa asked after Jackie and the rest of the cast left the table outside Dolores Catania‘s shore house. “You and Melissa should have [eaten] her alive after she said that about the whole jail thing.”

“Would you sit down? You’re wrong,” Joe, 41, shot back at his sister. And after Melissa asked Teresa to finally end her ongoing feud with Jackie, Teresa refused. “Not one person said to Jackie, ‘that’s f***ed up,’” Teresa told Melissa, 42, while — once again — referencing the jail diss and ignoring the real issue at hand (the cheating rumor).

And in that moment, Melissa lost it. She went off on Teresa, yelling, “Wait a second — what are you going to say now? I should have stuck up for you when she said you should be in jail? Really? Because all of a sudden you’re a weak bitch who can’t defend herself?”

“Because you just f***ing stuck up for your ex-husband when we were defending you! What the f*** is wrong with you? You’re a sick f***ing b****,” Melissa continued, referring to an incident earlier in the evening when Teresa said her ex-husband Joe Giudice was “a class act” throughout their divorce. Teresa felt Joe should apologize for the negative things he had previously said about her ex. But Melissa clapped back. “I’ve defended you too many f***ing times; defend us against your ex-husband!” she said before her husband Joe jumped in. 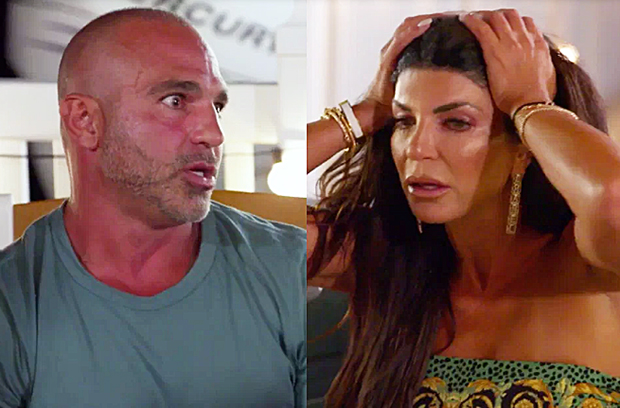 “I’m mad at the son of a b*** for what he did to you!” Joe yelled, as his voice became louder and louder. “He ruined everything and he PUT YOU IN JAIL.”

“My wife is a f***ing hundred percent right! You gonna defend him?” he yelled even more, as the cast started to hold him back from Teresa, who remained speechless through her brother’s screaming. “I don’t want to f***ing hear it,” he said before slamming his fists down on the table — just like he did at the wild christening during Season 3. “F*** that piece of s***. He put my mother in a f***ing grave, so I’m supposed to f***ing like him? Do you f***ing understand that?” 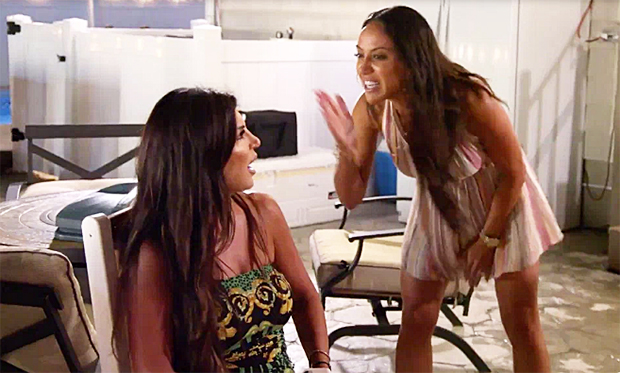 We’re not sure how much Teresa truly comprehended in that moment (it is Teresa after all), but she understood enough to say that Joe Giudice is no longer in her life, so there’s no reason to fight over him anymore. Dolores also reminded the both of them that their parents, who both recently passed away, never wanted Joe and Teresa to be at odds with each other, so she urged them to let bygones be bygones so they could move forward together. They agreed and hugged each other. But boy, was that a wild fight. It was classic Jersey and we needed it.

Later, Jackie told Margaret Josephs that her husband was an “asshole” for further spreading the cheating rumor during guys’ night. She found out Joe Benigno did so last week, when Teresa and Jennifer Aydin spilled the beans. But Margaret told Jackie to let it go because the guys were only discussing the rumor, not saying it was true. It was another intense moment because almost everyone was crying and screaming after a lot of drinking, but in the end, Margaret and Joe apologize to Jackie and they moved on.

Teresa also — FINALLY — (sort of) apologized to Jackie for spreading the cheating rumor about her husband, Evan. And Jackie thanked her for doing so, but urged her to apologize to Evan to. So she did, but as Margaret later said, it was the “weakest apology” anyone’s every seen. Jackie and Evan probably just felt super awkward in the moment, so they just accepted it and decided to move on. Let’s just hope that’s the last we hear of this rumor.

The only other thing worth mentioning from this week is the fact that Margaret went after Jennifer for sharing what Joe had said. Margaret told Jennifer that she was trying to start trouble, while Jennifer told Margaret that she’s always sloppy. Especially because she had sex with her boss. Margaret became so upset over the fact that Jennifer would poke fun at a man taking advantage of a woman that she accused Jennifer of using her husband for his money. He’s your “meal ticket for your entire family”, Margaret said as she stormed off and the episode ended soon thereafter.