RICHARD LITTLEJOHN: Roll up for all the fun of Independence Day! If we ever shake the yoke of the EU we should mark it with our own national holiday

This time of year always finds me in the United States, for my mum’s birthday. Ninety-one today, since you ask, thanks very much, and still marching towards the sound of gunfire.

On her 90th, we celebrated in a typically dark American steakhouse. Mum wandered into the men’s toilet by mistake. When I found her there, she said: ‘Don’t worry, I’m defining as transgender today.’

Some of you may remember that I mentioned it here at the time. Yesterday, as I sat staring into space, desperately seeking something to fill this column which doesn’t involve Brexit or the Tory leadership contest, she apologised: ‘Sorry I can’t come up with anything silly for you to write about again this year.’ 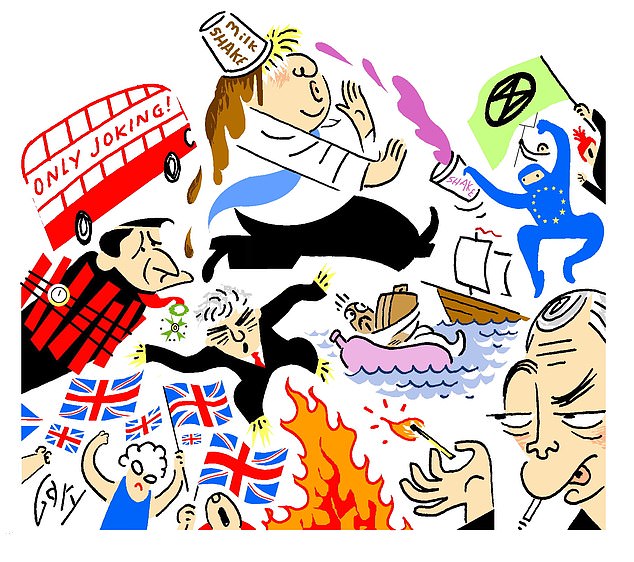 If and when we ever shake off the yoke of the EU, we should mark the historic event with an Independence Day of our own

Not to worry, Mum, I said. There’s more than enough madness at home to keep me going.

We flew in to Detroit on a plane packed with Americans returning for the July 4 Independence Day holiday. Most people were in a party mood.

The Yanks do these non-denominational, non-partisan holidays well. Thanksgiving is another case in point.

Regardless of political or religious persuasion — and this year, despite the relentless carping of the Never Trumpers — these annual celebrations bring the nation together in a spirit of unity.

July 4 marks America’s freedom from British rule in 1776. The spirit of national independence and individual liberty has burned fiercely ever since.

It’s often forgotten that there were plenty of Americans in 1776 who were still loyal to the British Crown.

But I don’t recall any refusing to accept the result of the Revolutionary War or demanding a rerun. If only the same could be said of our own diehard Remainers.

Talk to most Americans and they can’t understand why so many people in Britain want to be ruled by Europe.

Why would a former colonial power consign itself to being a colony of Brussels in perpetuity?

Which got me thinking: if and when we ever shake off the yoke of the EU, we should mark the historic event with an Independence Day of our own.

Perhaps we, too, could put aside our differences and come together as a nation. Then again, I thought, fat chance of that ever happening, if the resistance to the Leave vote is anything to go by.

Britain today held a national holiday to celebrate the first anniversary of its freedom from foreign rule.

Prime Minister Boris Johnson led a triumphant parade around the country, waving to the crowds from the upper deck of an open-top red bus, bearing the slogan: ‘£350 million more for the NHS? Only joking, folks!’

Everywhere he went, he was pelted with milkshakes by protesters wearing blue and gold EU bodysuits and balaclavas, looking for all the world like an army of Smurfs. 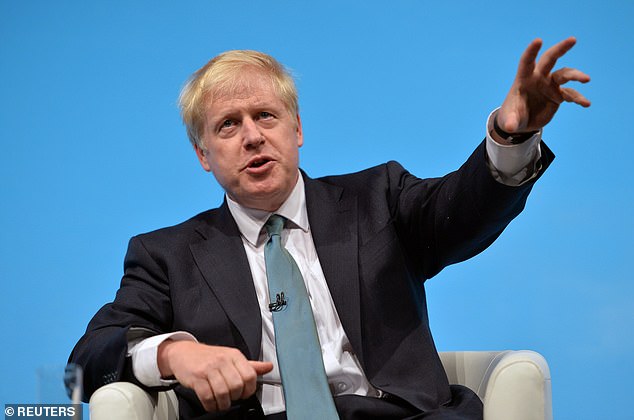 On our Independence Day, Prime Minister Boris Johnson would be pelted with milkshakes by protesters wearing blue and gold EU bodysuits

Fittingly, the revelries kicked off in Boston, Lincolnshire, the town which gave its name to Boston, Massachusetts, cradle of the American Revolution.

In Boston, Mass, it was the cry of ‘no taxation without representation’ that kickstarted the independence movement.

In Boston, Lincs, where 75 per cent of the population voted Leave, it was ‘no more immigration’ that lit the fire under the Brexit revolt.

Independence Day UK was marked with a very British version of the Boston Tea Party. Instead of throwing crates into the harbour, Bostonians threw a real tea party.

One local resident, fruit picker Lech Borkowski, recently arrived from Warsaw, tucked into a traditional Lincolnshire feast of Polish sausage and vodka. Borkowski is a big fan of Brexit. ‘It means we won’t have to put up with all those foreigners coming over here taking our jobs,’ he said.

But not everything went smoothly. Plans to light beacons across Britain and hold hog roasts and barbecues in every town and village had to be abandoned after demonstrations by climate change protesters.

Police stood by as masked fanatics blocked roads and bridges, claiming the smoke from the beacons and hog roasts would damage the ozone layer, contribute to the deaths of millions of polar bears and cause a tsunami which would wipe out most of the Third World. 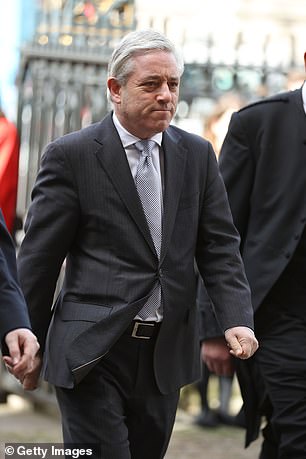 But Brexit Party leader and Fox News pundit Nigel Farage defied the protests at a rally in Birmingham, setting light to a bonfire featuring an effigy of pro-Remain Speaker Jean-Claude Bercow, who had strained every sinew to stop Britain leaving the EU.

The symbolic burning of Bercow was followed by an appearance of the popular post-punk band The Bad Boys Of Brexit, performing their smash hit version of Bruce Springsteen’s Independence Day.

Plans for an Independence Day UK Proms In The Park sadly had to be abandoned when Hyde Park was invaded by ‘travellers’ who set up an illegal gypsy camp next to the Serpentine. Thousands who had bought tickets had to settle for a festival of pickpocketing and aggressive begging by members of Marble Arch’s resident Roma community.

They also had to contend with a pro-EU counter demonstration, led by Amber Rudd, dressed as Marie Antoinette, and flying a giant blimp of a baby Boris Johnson — which was eventually brought down to earth by Metropolitan Police marksmen shortly before it was about to crash into the Post Office Tower.

In an attempt to recapture the spirit of Dunkirk and of Sir Francis Drake, who foiled the Spanish Armada, a number of small ships set sail from Dover to intercept a flotilla of illegal immigrants in speedboats and on a selection of novelty inflatables, who were attempting to cross the Channel in a bid to beat Brexit border controls.

French fisheries protection vessels sunk all the small ships and the illegals were escorted by the Royal Navy to the Kent coast, where they were put on coaches to Croydon.

A planned fly-past by Britain’s last few wartime Spitfires had to be cancelled when members of Extinction Rebellion superglued themselves to the runway at RAF Northolt.

And an extravagant Merrie England pageant in Windsor Great Park was also called off following complaints from Prince Harry and Meghan Markle that their privacy was being invaded.

Wearing his Legion d’Honneur, France’s highest civilian honour, awarded in recognition for services to the EU Grand Project, Grieve ran into the road in front of Boris Johnson’s bus and attempted to blow himself up.

But before he could detonate his suicide vest, the bus ran him over. Prime Minister Johnson then ordered the driver to reverse back over him, just in case . . .