RICHARD LITTLEJOHN: Just imagine what those in the US must think as they watch the shenanigans of our Parliament – and we have the nerve to sneer at THEIR politics?

Trying to make sense of the Brexit debacle is maddening enough, even if you live here. So imagine what the shenanigans over the past few days must look like from overseas.

To find out, it’s time once again to cross to our U.S. affiliate, Eye Witness News, in Palm Beach…

Good morning, America, how are you? This is your favourite son, Chad Hanging, with another fair and balanced three hours of news you can use. While we’ve been hunkering down in the face of Hurricane Dorian, there’s been plenty of turbulence on the other side of the pond, in Jolly Old Englandland. Let’s go live to London, where our special correspondent Brit Limey has been following events. 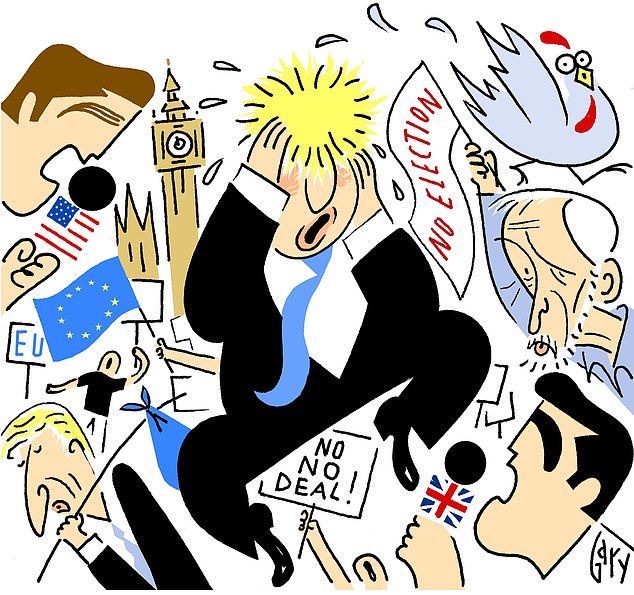 Trying to make sense of the Brexit debacle is maddening enough, even if you live here, writes Richard Littlejohn

You’ll have to speak up, Brit. I can hardly hear you. There’s a lot of noise in the background.

That’ll be the pro-Eurovision demonstrators, Chad. They’ve been camped out here 24/7 for the past three years, waving flags and shouting through loud-hailers.

What are they doing there?

They want to stop Brexit.

I thought the Yew-Kay voted for Brexit over three years ago.

They did, but it still hasn’t happened.

It’s a long story, Chad. Basically, most of the MPs — that’s what they call congressmen here in Westchester — don’t want to leave the Eurovision Union. So they’ve done everything they can to stop it. 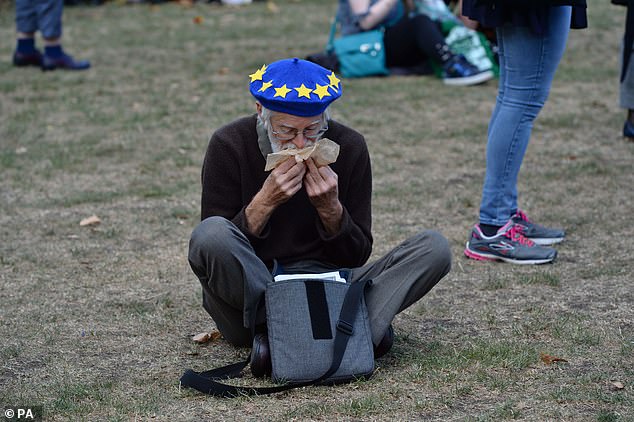 Quoting a pretend American News report, Richard Littlejohn writes, ‘I’m standing here on Collard Green, the media village opposite the Palace of Westchester, cradle of British democracy.’ (Pictured: A Remainer tucks into some lunch outside the House of Parliament on Wednesday) 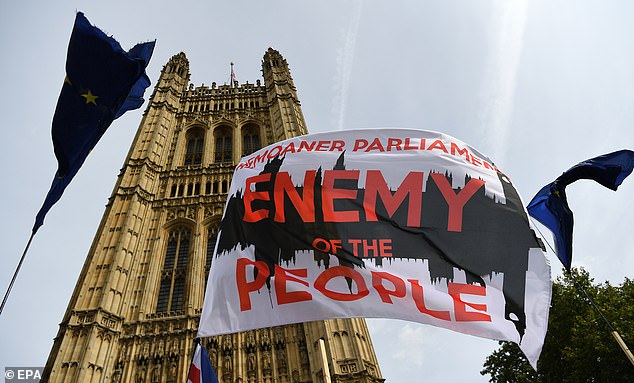 Continuing the analogy, Richard Littlejohn writes that the American News reporter is saying the protesters are ‘pro-Eurovision’. (Pictured: A pro-leave flag flies outside Westminster yesterday)

But didn’t they promise to respect the result of the referendum?

Yes, they did, but they didn’t mean it.

So they lied to the British people?

I thought President Maggie May said that Brexit would mean Brexit.

She did. She also said that no deal was better than a bad deal. But she didn’t mean that either. She came back from Brussels with a bad deal that nobody liked.

What was the problem?

Something to do with a bus stop on the island of Irelandland and having to build a wall in the sea.

How was that supposed to work?

Like President Trump’s wall on the Mexican border, I guess. She tried to get her deal through the House of Westchester three times, but the MPs kept voting against it. In the end she was forced to resign.

So who’s in charge now?

Boris? He’s Russian? I knew there were plenty of Commies in Englandland but I never thought they’d make one President. 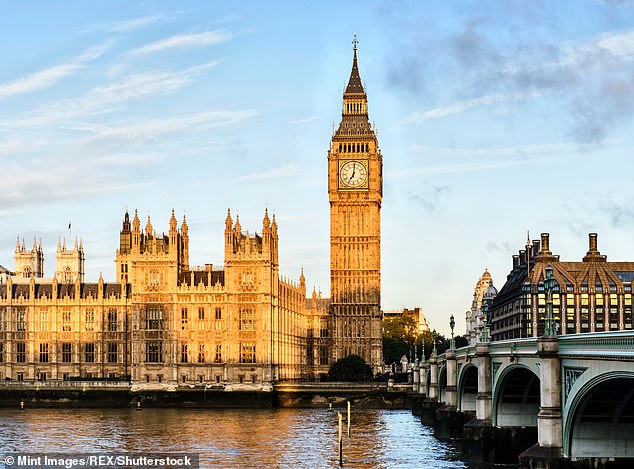 In the column, the News reporters also ask whether Boris Johnson is Russian and who ‘Jeremy Corden’ is. (Pictured: The Palace of Westminster at sunrise)

He’s not a Commie, Chad, he’s a Conservative. Mind you, the way things are going here at Westchester, the Yew-Kay could soon have a real commie as President.

The English guy who does that late-night TV show with the Carpool Karaoke?

No, that’s James Corbyn. Jeremy Corden is leader of the Labor Party.

So there’s going to be a General Election?

Not necessarily, Chad. Corden says he wants an election. So does Boris, on October 15, but Labor won’t let him hold one.

Run that by me again, Brit.

Can they do that?

Hang on a doggone minute. Corden says he wants an election but voted to stop President Boris calling one?

So Corden is against Britain leaving the EU?

No, he’s always been anti-EU. He thinks it’s a capitalist conspiracy against the workers.

So why doesn’t he vote for Brexit?

Because he wants to be President.

Surely he can’t become President without winning an election.

You’d think. But nobody else wants him to be President, even most of his own Labor Party MPs.

Does anyone apart from President Boris want an election?

The Scotch Nuts say they want an election.

Where does this leave President Boris?

Well, he’s lost his majority and lost control of business at Westchester.

How did that happen?

One Conservative congressman resigned to join the Liberal Democrats this week and 21 more were kicked out of the party for voting to prevent President Boris taking Britain out of the Eurovision Union without a deal on October 31.

What happened to ‘no deal is better than a bad deal’?

They’ve taken that off the table. They want a deal.

But didn’t you say earlier that when President May offered them a deal, they voted against that three times?

They’ve also been offered a yuge free trade deal with America, but they don’t want that either.

They pretend it’s about not letting the U.S. export chicken rinsed in chlorine to Englandland. They say that it’s poisonous, or something.

But millions of Americans eat chlorinated chicken every day and we’re not dropping like flies. Correct me if I’m wrong, in Europe they eat horses, don’t they?

It’s got nothing to do with chicken, Chad. They just don’t like Donald Trump.

Heck, I don’t like Donald Trump either, but that’s not going to keep me away from a party bucket of KFC.

Let me jump in here, Chad, with some breaking news. I’m just hearing that Johnson has resigned.

Hold on. It’s his younger brother, Jo, who has resigned, not Boris. He’s a Conservative MP and minister but he’s also a Remainer and says he has to put the national interest above family loyalty.

So he wants to stop Brexit, too?

I guess so, Chad.

We’re running out of time, Brit, so can you just explain how all these MPs attempt to justify trying to overturn the result of the referendum and preventing the people having their say by voting in a General Election.

They call it ‘defending democracy’, Chad. And they say they’re sticking up for parliamentary sovereignty, even though they have now given Brussels the power to decide when, or if, and on what terms, the Yew-Kay can leave the EU. Which will be, like, never.

Holy cannoli! What the Sam Hill is going on over there? Westchester is supposed to be the Mother of Parliaments. This is the country that gave us universal suffrage, Winston Churchill, Mrs Thatcher and Magnus Carter. Sounds to me more of a tinpot banana republic like Venezuela.

Funny you should mention Venezuela, Chad. If Jeremy Corden ever does become President, the Yew-Kay will end up exactly like Venezuela.

And they have the goddam nerve to sneer at the way we run our democracy.