Steve Sawyer, a leader of the international environmental group Greenpeace and one of the first activists on the global stage to sound the alarm over the rising threat of climate change, died on July 31 in a hospital in Amsterdam, where he lived. He was 63.

The cause was complications of pneumonia stemming from lung cancer, which was diagnosed in April, his wife, Kelly Rigg, said.

Over nearly three decades, starting in the late 1970s, the American-born Mr. Sawyer rose from being a low-paid canvasser for Greenpeace, going door to door to solicit donations and memberships, to running the organization, whose global headquarters is in Amsterdam.

He came of age with the group, embodying its radical spirit in his early activist days, then helping to lead it to the forefront of the global environmental movement.

Perhaps his most dramatic Greenpeace expedition was in 1985, when he was on board the group’s flagship vessel, the 130-foot trawler Rainbow Warrior, on a campaign to stop France from testing nuclear weapons in the South Pacific.

The ship had sailed to New Zealand to lead the protest and was docked in Auckland when two explosions ripped through its hull and sank it, killing the ship’s photographer. French intelligence agents had planted the bombs. 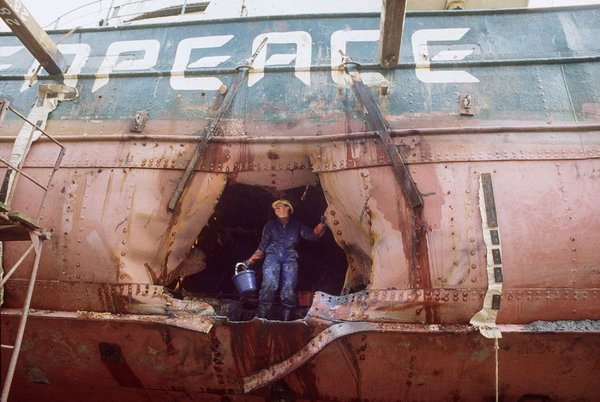 At the time, Mr. Sawyer, the senior policy person on board, was in port celebrating his 29th birthday.

The bombing backfired on France. An international outcry galvanized the antinuclear movement, brought donations to Greenpeace and helped end nuclear testing in the Pacific.

“Greenpeace had some of its greatest triumphs in the years Sawyer was at the helm,” Brian Fitzgerald, a former Greenpeace activist, wrote in an appreciation after the death.

These included a 1991 treaty signed by a dozen countries to close Antarctica to gas, oil and mineral exploration for 50 years; an agreement, signed by all the member nations of the United Nations, to phase out a succession of ozone-depleting chemicals, a move that has helped the ozone layer to recover; and a 37-country pact to ban the dumping of radioactive waste at sea.

In addition, he said, Mr. Sawyer had “led Greenpeace to begin campaigning in earnest against climate change long before most of the environmental movement understood the threat.”

Stephen Gregory Sawyer was born on July 10, 1956, in Boston, to Winslow Allen Sawyer and Frances (Wheeler) Sawyer. His father was an engineer and his mother a piano teacher.

He grew up in southern New Hampshire, in Antrim, and graduated from Haverford College in Pennsylvania in 1978 with a philosophy degree. After college he had no clear sense of what he wanted to do until, while he was living with friends in the Boston area, a Greenpeace canvasser rang his doorbell seeking donations. Mr. Sawyer liked what he heard and soon signed up to be a canvasser himself.

He had always loved boating, his wife said, and was intrigued by the idea of working for Greenpeace in part because it would allow him to work on the water on the Rainbow Warrior.

By early 1980 he had joined the crew and was going on protest voyages. Their targets included nuclear waste dumping off the coast of Spain, large-scale Canadian hunts for seal pups and toxic waste disposal off New Jersey.

On its way to New Zealand to protest the French nuclear testing, the Rainbow Warrior also undertook a humanitarian mission on Rongelap Atoll in the Marshall Islands. The island had been heavily contaminated in the 1950s when the United States was testing hydrogen bombs in the area. The atoll was evacuated in 1954 but declared safe three years later, and people returned.

In time, the rates of miscarriages, birth defects, cancer and thyroid disease on Rongelap soared, but the United States refused to evacuate people again; doing so, the government said, would set a costly legal precedent linking radioactivity with a host of human illnesses.

When the Rainbow Warrior arrived in May 1985, Rongelap residents came out with banners to welcome the crew as liberators.

As the senior policy figure on board, Mr. Sawyer held discussions with island officials, who told him that the residents wanted to be evacuated.

“Seeing all those deformed kids and the women with the thyroid scars” moved him emotionally, he said in a 2015 interview with the Pacific Media Center.

Greenpeace called it Operation Exodus. Over 10 days, Rainbow Warrior crew moved nearly 300 people from Rongelap to Mejato, an island about 100 miles away, along with more than 100 tons of building materials and livestock. The ship made at least three round trips to relocate the population of Rongelap.

It was a major logistical challenge for the Rainbow Warrior, which was more practiced in protests than humanitarian missions. But Mr. Sawyer had been determined to see it through. Friends said that of all his Greenpeace projects, he was proudest of the Rongelap mission.

“He emerged as a powerful authority figure in an organization of people who have contempt for authority,” Peter Dykstra, who worked closely with Mr. Sawyer at Greenpeace U.S.A., said in an interview. “He was trustworthy in part because he was free of ego.”

Mr. Sawyer and Ms. Rigg, also a former Greenpeace activist, married in 1988. In addition to his wife, he is survived by their daughter, Layla Sawyer; their son, Sam; a brother, Winslow Jr.; and a sister, Karen Sawyer Hurd. Another sister, Janet Akins, died in 2008.

He traveled and lectured widely, alerting governments and corporations to the dangers of rising temperatures and speaking about the benefits of wind turbines in reducing the amount of harmful carbon emissions generated by fossil fuels.

“He had a scholarly understanding of the science,” Mr. Fitzgerald wrote in his appreciation, “an activist’s anger at inaction, and a strategist’s eye for where to apply pressure or introduce solutions.”