As a behind-the-scenes Hollywood player, Scott Z. Burns has done everything from co-writing one of the Bourne films to producing Al Gore’s global warming documentary An Inconvenient Truth. 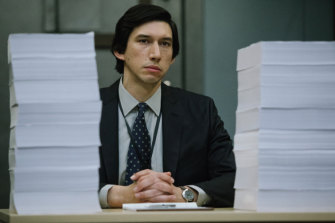 But his voice comes through most clearly in the screenplays he has written for director Steven Soderbergh, such as the brilliant The Informant! There’s a wilfully prosaic side to Burns’ sensibility, and a degree of earnest social concern – but also, underpinning all this, a sneaky absurdism.

The Report, which Burns wrote and directed, has this same mix of qualities, starting with the title, which could belong to a lost Kafka novel. The premise is a bit Kafka, too: US Senate investigator Daniel Jones (Adam Driver) is asked to look into the CIA’s use of torture following the September 11 attacks, a task he’s led to believe will take about a year.

But Daniel and his small team of helpers soon run into obstacles, including the fact that no one from the CIA is willing to speak to them. Years later, the document they’ve compiled is longer than the Bible, with no end in sight – and even when their work is done, there’s no guarantee it will ever see the light of day.

This is, of course, a true story, though it’s hard to judge the accuracy of certain details. Take the basement office supplied to Daniel and his team, an airless cage with a wire mesh ceiling, stark fluorescent lighting, and initially, for security reasons, no printers. Is all this founded on fact, or has Burns allowed himself some poetic licence?

The same question applies to the mocking presentation of secondary characters, like the buffoonish ex-air-force psychologists who enthusiastically OK waterboarding and other torture methods: James Mitchell (Douglas Hodge) is a bearded good ol’ boy, Bruce Jessen (T. Ryder Smith) has a bit of a Nazi doctor vibe going on. Still, the whole story is startling enough that once one element is accepted the rest isn’t too hard to swallow.

In its mix of dryness and quirkiness, The Report is a lot like a film by Soderbergh (who produced) and Burns borrows some of Soderbergh’s visual techniques, such as the colour-coding of flashbacks. Other devices are more generic: the shots of empty corridors or buildings at night resemble those used to add atmosphere to documentaries about the internet. 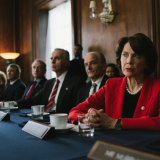 Ultimately, the film is a character study as much as anything else – focused, obviously, on Americans, not on the actual victims of torture. Burns has been lucky in his actors, starting with Driver, whose performance is one long slow burn.

Daniel approaches his task as a sober pro, but gradually his outrage takes over his whole body: his long arms shoot out, his voice shifts around in pitch, and the adult man, in close-up, appears to give way to the solemn high school boy we can imagine once dreamed of a responsible position in government.

The foil to all this is the caution of Daniel’s boss Dianne Feinstein (Annette Bening), a Democratic senator but a conservative by temperament. As usual, Bening gives us a detailed portrait full of believable contradictions: a woman with principles who has learned how to work the system, carefully groomed yet faintly awkward, with a monotonous voice and a way of blinking slowly when taking on new information.

The warmth that creeps into her relationship with Daniel suggests a bond between mother and son, a feeling that registers all the more strongly because Burns doesn’t tell us much about either character’s personal life.

With a mainstream American audience in his sights, Burns himself has to exercise some caution, especially when it comes to the question hanging over the film: how far were the CIA’s actions truly a betrayal of American principles, as opposed to an extension of business as usual?

But The Report doesn’t pull all of its punches. While the events Daniel is investigating took place on George W. Bush’s watch, we’re shown how the Obama administration likewise strove to keep them quiet.

Burns is willing, too, to critique other dramatic re-creations of these same events, including Kathryn Bigelow’s Zero Dark Thirty – not a straightforwardly pro-torture film, but certainly one that lent a degree of unwarranted glamour to the crossing of a moral line.

The Report is screening at selected cinemas before its release on Amazon Prime on November 29.