The International Monetary Fund has urged the Reserve Bank and economic regulators to tighten lending standards to deal with the potential negative fallout from high levels of business and household debt caused by record low interest rates.

As the Australian Prudential Regulation Authority said it was closely watching the widening gap between higher house prices and slowing wages growth, the IMF said the low rates used to deal with the coronavirus recession would cause long-term pain without tougher limits on lending from banks and emerging non-banks. 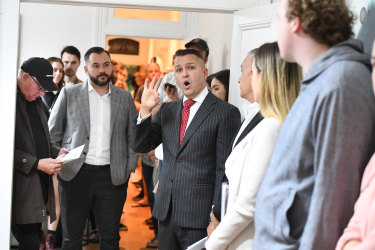 The IMF is urging central banks and regulators such as the RBA and APRA to use macroprudential tools to protect financial stability in the face of soaring house prices.Credit:Peter Rae

The RBA has taken official interest rates to a record low of 0.1 per cent while undertaking a quantitative easing program worth at least $200 billion as it seeks to support the economy.

But such low rates, on top of federal and state government housing support programs, have helped drive house prices above pre-coronavirus levels. ANZ analysts are predicting prices to climb 17 per cent this year across all capitals, the single largest annual increase since the late 1980s.

That has prompted speculation the RBA and APRA are considering so-called macro-prudential regulations, which include tighter bank lending standards, to protect financial stability in a move that would also take some heat out of the property market.

IMF analysts Adolfo Barajas and Fabio Natalucci said in research released overnight that central banks and regulators faced a dilemma, as low interest rates helped the economy but also increased the amount of debt taken on by businesses and households.

This debt delivered an economic boost in the short term but increased the risk of a correction in the longer term. The larger the short-term improvement, the larger the longer-term risks.

The researchers said there was a strong case for tighter macro-prudential rules and to review the emergence of credit growth in non-bank areas where there are signs of households taking on debt outside traditional funding sources.

RBA data shows the debt of owner-occupiers has reached a record high of 99 per cent of household income. During the 1990-91 recession, debt to income was less than 26 per cent.

Any tighter lending standards would be put in place by APRA after consultation with other key regulators including the RBA.

APRA chairman Wayne Byres told the House of Representatives’ economics committee on Monday that if there were issues that required macro-prudential intervention, it would be a discussion held with the RBA, Treasury and the Australian Securities and Investments Commission.

The large mortgages borrowers are taking on to get into the property market as house prices climb are a growing concern.

Mr Byres said no one was expecting wages growth to be “particularly strong” in the short term.

“It does seem house prices, at least on current trajectories, will run ahead of income growth by some margin,” he said. “How that plays out and what that means in terms of restoring financial system stability, obviously we [will] keep an eye on but we’re watching it quite closely at present.”