A major multinational has decided I’m at death’s door.

“The black tea drinkers are getting older,” the head of Unilever told investors this month. “They are consuming less,” he said and will soon “start to fall over”.

Well, thanks a lot. 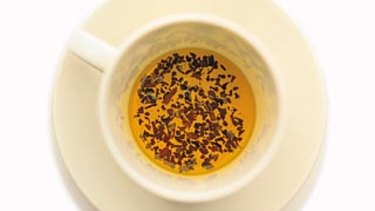 Unilever boss Alan Jope says the company is trying to extricate itself from the black tea business.Credit:Marina Oliphant

The boss, Alan Jope, was explaining why Unilever is trying to extricate itself from the black tea business, particularly in developed countries. Apparently, no-one under about 90 years of age likes the stuff.

They’d rather drink a herbal tea. Or – more likely still – a coffee.

Personally, I still prefer leaf tea, made properly in a pot, the pot turned thrice to allow the leaves to settle – all accompanied with a robust argument about whether to put the milk in first or last.

I make a pot every morning, and then stare out the window while it brews, a blessed four minutes in which I don’t have to do anything. Compare that with the hissing and huffing of a coffee machine, demanding constant fevered attention as you grind and tamp and froth.

As the tea quietly brews, I fetch the cups, stare out the window a little more, then put the milk in first, which apparently means I’m a peasant.

Peasants, you understand, had cheap drinking vessels made of clay which would crack if the hot tea was the first thing in, while the aristocracy had bone china, which could survive the heat, and so they splashed the hot tea straight in, just to prove that their cups could take it.

And to prove that aristocrats always were sad show-offs.

Despite these arguments over the milk, black tea was by far the most popular beverage in federated Australia, right up until the mid-1970s.  As a measure of its importance in our history, the word “tea” gets twice as many hits as “coffee” in the database of the Australian Dictionary of Biography – a quick search inviting you into the lives of Chinese tea-merchants, colonial tea-planters and even the spirited athletes of the Sydney Ladies’ Bicycle Club who set up their organisation in Mei Quong Tart’s city tearooms.

Coffee had to wait its turn. Even in the 1970s, espresso machines were unusual, especially outside Sydney and Melbourne. I grew up in Canberra where, in 1979, the local cinema took space in The Canberra Times to make the big announcement: “Service is about to include espresso coffee!’’, the exclamation mark an indication of the magnitude of the news.

I fetch the cups, stare out the window a little more, then put the milk in first, which apparently means I’m a peasant.

Coffee, most of the time, meant a spoonful of instant – Nescafe, International Roast or Pablo, depending on your level of income. At my parents’ house, we always enjoyed “single-origin” coffee – the single origin being a can of International Roast, sitting by the electric jug.

The rising popularity of coffee is captured in the annual data from the Australian Bureau of Statistics. At the start of the 1960s, less than a kilogram of coffee was being consumed per person each year – .77 of a kilogram to be precise – compared to 2.6 kilograms of tea. From then on, with each passing year, coffee consumption rose while that of tea fell. The crossover point was reached in 1978-79 when precisely the same amount of both was consumed: 1.68 kilograms a head.

From then on, it’s been an unequal contest. Tea – particularly loose leaf tea – is now a niche product, a packet only secured after you spend 10 minutes on your hands and knees, searching through the bottom shelf in the supermarket.

We tea-drinkers need to fight back. Tea is such a wonderful drink. Tea is the only drink that can warm you up when you’re cold, and yet cool you down when you’re hot. It is both celebratory and yet calming; sharpening yet relaxing.

It’s also a symbol of kindness and comfort. When have you ever heard the phrase: “Her husband of 40 years died, so I’m going to rush around and make her a cup of coffee”?

Meanwhile, research builds about the health benefits of tea. Just last month, the journal Neurology published a study concluding that one or two cups of tea a day, consumed as part of a healthy diet, could reduce the risk of Alzheimer’s by almost half.

Other studies point to the presence of a unique amino acid, L-theanine, shown to improve mental clarity, while regular black tea consumption also has a beneficial effect on blood pressure and even weight loss.

The health benefits of tea are easy to read about – especially if you are a tea drinker. Researchers at the University of California and Brown University found tea improved eyesight: those who drank at least one cup were 74 per cent less likely to develop glaucoma.

In other words, the boss of Unilever may be right when he says we tea drinkers are getting old. He may, though, be wrong when he draws the conclusion that we are all about to drop dead.

No way – not if we keep up our consumption of that glorious, magical, miraculous drink called tea.