Is Top Gear puerile… or pure comedy gold? Divisive series premiere that saw the presenters pull down their pants, sing karaoke and Freddie Flintoff wet himself leaves viewers torn over whether it was ‘brilliant’ or ‘immature’

The episode saw presenters Paddy McGuinness, Chris Harris and Freddie Flintoff clamber over high-end cars, pull their trousers down and sing karaoke while taking part in motoring challenges and reviewing vehicles for viewers.

The blend of humour and motoring insight proved a hit with fans, who said it was ‘just the tonic’ for such a difficult time.

But the antics proved a step too far for others, who slammed it ‘puerile’, ‘disappointing’ and ‘immature’. 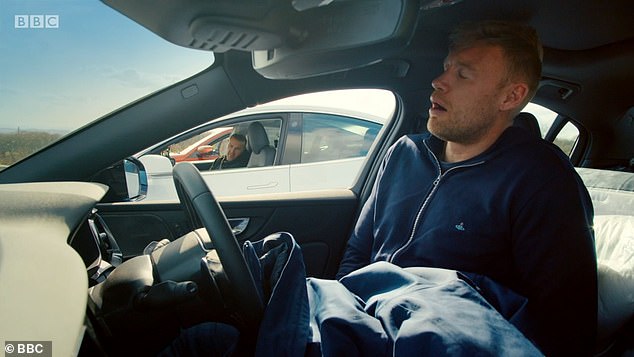 Puerile or pure comedy gold? Top Gear returned last night with a series premiere that divided public opinion. In one moment Freddie Flintoff urinated on camera while sitting in a car 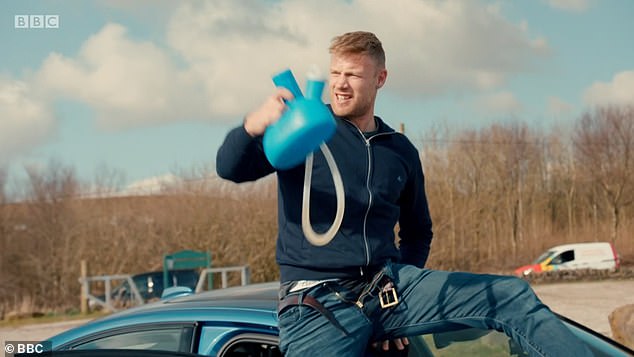 Drying off: Flintoff wet his pants after his attempt to use a SheWee went awry and had to sit on the roof of his car (pictured) to dry off. The moment left Harris and McGuinness in hysterics

Divisive: Critics slammed the ‘childish’ humour but others said they ‘loved it’

The episode started with the trio travelling to McGuinness’ hometown of Bolton, where they were told they had to spend 24 hours in three company cars.

The first question that came to mind was the toilet, with McGuinness asking Harris: ‘Did you have a poo this morning?’

The moment failed to impress some viewers, with one fan tweeting: ‘Three middle-aged men calling cars missiles & asking each other if they’ve had a poo does not constitute entertainment. Pass the remote.’

During a rest stop on their tour of Bolton, Flintoff took out the SheWee – a female urinating device – he had been given and proceeded to use it while sitting in the car before revealing it had leaked.

Just what they needed! The blend of humour and motoring insight proved a hit with fans, who said it was ‘just the tonic’ for such a difficult time

Harris and McGuinness were doubled over with laughter, as were fans who praised the ‘hilarious’ moment.

Later in the episode the presenters delighted in pranking each other as they clambered between cars for a driving challenge.

The day ended with the trio singing Sweet Caroline in a karaoke session with passersby in the forecourt of a local petrol station.

The type of humour proved too much for some viewers, with one tweeting: ‘Bring back, Hammond, May and Clarkson! My 15 year old behaved better than the current bunch of oafs! #TopGear.’

Unimpressed: Critics said the episode was a ‘waste of an hour’ and a ‘disappointment’

Another posted: ‘It’s deeply amusing that, after all this time, the BBC are STILL trying to sell this pale, tragic imitation of Top Gear as the genuine article. As someone said ages ago, #TopGear is still alive: it’s just being broadcast on Amazon Prime under a new name.’

A third added: ‘Did anyone else endure last night’s #TopGear. What a waste of an hour. The company car thing lasted far too long. The live audience must have wondered what they were there for. Why not talk to them about the cars they’d brought? Hope the series gets better.’

However the criticism was matched by plenty of praise from fans of the show, with one arguing: ‘An hour of unadulterated humour! I loved it! For anyone coming here just to whine about it, please remember you are not being held hostage by your tv! #topgear.’ 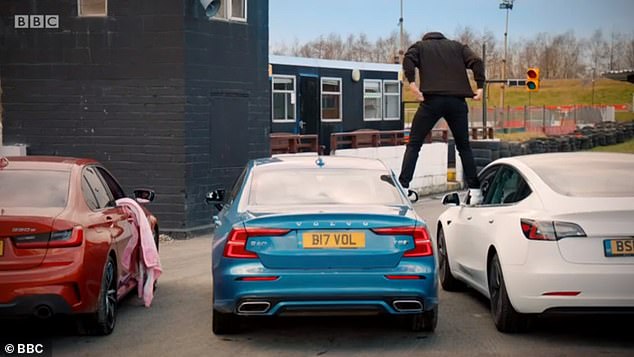 Immature? Later in the episode the presenters delighted in pranking each other as they clambered between cars for a driving challenge 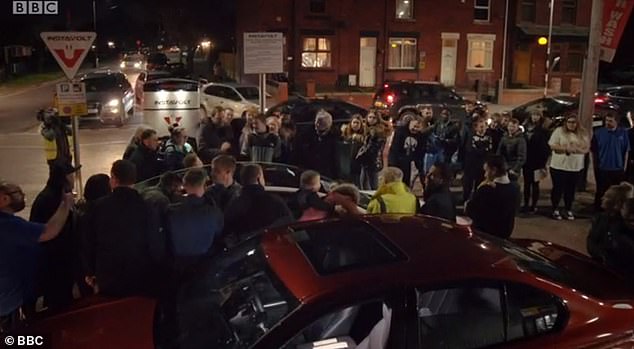 ‘Heart-warming’: At one point the presenters sung karaoke in a petrol station forecourt

One tweeted: ‘Never laughed so much on a episode of Top Gear before it’s even more funnier than the Clarkson, Hammond and May era. #TopGear.’

Another posted: ‘I loved #TopGear last night. Very amusing. We all need a childish laugh right now don’t we?? Seen some people on here moaning and still going on about Clarkson, May and Hammond…it’s been years!! You’re being a bit weird…’

The episode, which was filmed partly before lockdown and partly in recent months, also saw Harris travel to Italy to test the blistering Ferrari SF90 supercar.