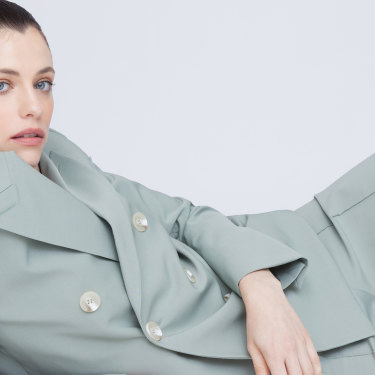 Australian actor Jessica De Gouw has long been a shape-shifting chameleon, adopting the accents of her characters as she’s flitted back and forth between her London base and the United States, Melbourne, Adelaide, the South Australian outback and the Snowy Mountains.

Jessica, 34, has spent most of the past 12 months in Sydney, the longest she’s been in Australia since she was a teenager, to resume the role of video blogger and journalist Meghan Shaughnessy in season two of the Network 10/Paramount+ thriller The Secrets She Keeps. The new series extends Meghan’s story and that of Agatha Fyfle (Laura Carmichael), the woman who kidnapped Meghan’s baby, beyond crime writer Michael Robotham’s novel of the same name. 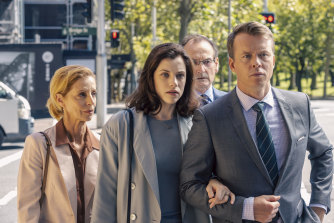 Heather Mitchell , Jessica de Gouw, Todd Lasance and Lewis Fitz-Gerald in the new season of The Secrets She Keeps.Credit:Paramount

Filmed around Parramatta and on Sydney’s lower north shore, the new season is “much darker” than season one, Jessica declares following a Sunday Life photo shoot, releasing her tied-back hair and slipping into a comfy grey T-shirt for our interview. Picking the story up two years on, both Meghan and Agatha – the former from a world of affluence, the latter subjected to abuse in childhood – are sifting through their respective traumas.

For her part, Meghan must deal with victim-blaming media narratives often placed on mothers whose children go missing. Even Meghan’s husband Jack (played in season one by Michael Dorman but replaced in the role for this season by Todd Lasance) blamed his wife for “making the family a target” by serving up their lives for public consumption on the internet.

“Meghan’s focus has moved away from that public world because the cost was so massive,” says Jessica. “And they’re still processing what happened in a very private way. It felt incredibly unfair to me that she was on the receiving end of that conversation because I have a public life too, sort of.”

Indeed, social media is a useful tool for actors building careers, but it comes at a cost. “Oh, Twitter is the worst!” says Jessica. “I haven’t been on it for about a year because I find it so derailing, so exhausting. It can be such an incredibly powerful connecting tool but it’s also divisive, cruel and faceless.” 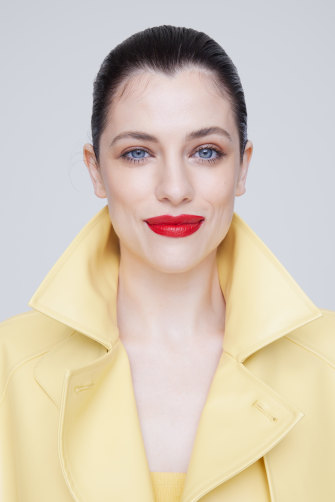 Jessica maintains a lively Instagram account, but constantly “battles” with herself over how much to give away about her private life. “I’m hired to play characters, to be believable as those characters, but if I’m so visible online as myself it takes away some of the mystery of that.”

Recent photos Jessica has posted to Instagram tell the stories of navigating an international screen career while thriving despite COVID lockdowns and border closures. In one image, taken in London while season two of Pennyworth was being filmed, Jessica faces co-star Jack Bannon. Both are wearing blue disposable face masks.

“Every time we ‘had intimacy’ in the show we’d have to be locked up in a hotel for a couple of days beforehand.”

Pennyworth tells the backstory of Batman’s butler, Alfred Pennyworth (Bannon), and Jessica plays Melanie Troy, who has an affair with Pennyworth before she escapes the dystopia of a London racked by civil war for the United States.

“We were shooting Pennyworth in March 2020 and we got stood down,” Jessica recalls. “When we went back in August, no one was vaccinated and COVID was everywhere in London. Because we were in the studio, you could create a safe environment. But it was really intense.

“For Jack and I, every time we ‘had intimacy’ in the show we’d have to be locked up in a hotel for a couple of days beforehand. Even just a kiss on the cheek, or a hug, was like, ‘Well, that’s 72 hours in isolation.’ Fortunately, he’s a very good friend.” (The Secrets She Keeps was shot at the same time as season three of Pennyworth, ruling out Jessica’s return to the London-based series.)

In her private life, Jess was in a relationship, as older Instagram posts make clear, with British actor Oliver Jackson-Cohen, who played William Thornhill in the 2015 television adaptation of Kate Grenville’s novel The Secret River. But while Oliver is “one of my best mates in the world”, they’re no longer a couple. 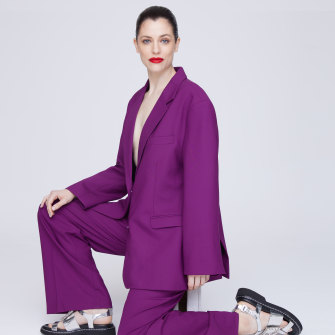 I mention the picture Jess posted last year from the wedding of her older sister Chelsea, a teacher turned policewoman, to her female partner, and the caption about their father, Eugene: “Dad was so proud to walk them down the aisle, he might as well have been skipping.” Was Chelsea an influence in Jess’s support of LGBTQI rights and her decision to play real-life lesbian feminist Robyn Plaister in the ABC’s Riot, a 2018 telemovie about the origins of Sydney’s Gay Mardi Gras?

“I mean, I’m queer. But my sister, yes, she got married and they’d been together three years. Of course I champion [queer rights] because it’s about human rights and everybody has the right to love who they want and be with who they want. I certainly don’t want to be denied that myself.”

Does Jess have a partner at the moment? “I do!” she says, grinning widely. “We’re new, I met her after lockdown,” she adds, a trill in her voice. “So, yep, she’s amazing.”

Jess was born in February 1988 to Eugene, a maths teacher, now retired, and Sally, who still works in aged care. Growing up in semi-rural Lesmurdie, on the south-eastern outskirts of Perth, she was the middle of five children in a family that also includes an older and two younger brothers. Her late stepfather, Greg, worked Clydesdale horses, which Jess grew up riding. Her early ambition was to become a vet.

“It was about love and sex and violence – when you’re 18, 19, and your creative world is being smashed open, there are just such strong emotions in that work.”

That changed when she began taking after-school acting classes at Lesmurdie High School and performing in community drama. At Perth’s Curtin University, Jess completed a bachelor’s degree in performance studies, consumed with the late British playwright Sarah Kane’s brand of “in-yer-face” theatre. “It was so confronting and so brutal and so raw; it was about love and sex and violence – when you’re 18, 19, and your creative world is being smashed open, there are just such strong emotions in that work.” 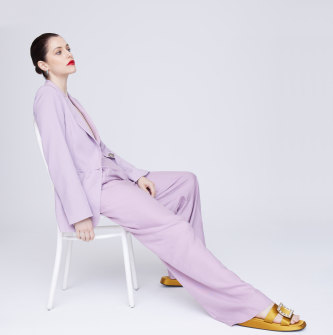 Several times during our interview, Jess refers to being “lucky”, and to the “joy” of being “allowed” to act. In 2012, she tested this luck by moving to Los Angeles and renting a two-bedroom house in the Los Feliz neighbourhood with five other Australian actors.

“I was sharing a bed with my very good friend Liz Blackmore, and T.J. Power was there, Geri Hakewill was there. You’d get that $2 wine from [grocer] Trader Joe’s and cook big meals. It’s an adventure.”

Within a month, Jess had landed the role of Helena Bertinelli/The Huntress in the US superhero TV series Arrow. Her next role, in the TV series Dracula, would take her to London, a city Jess describes as “probably my favourite in the world”. It remains her base.

Coming back to Australia to work remains a priority, however, with Jess appearing in local films These Final Hours (2013) and Cut Snake (2014) as well as two miniseries – The Hunting in 2019, opposite Richard Roxburgh, and Operation Buffalo, a 2020 ABC drama about British atomic testing in the Australian outback in the 1950s.

“She’s hands down one of my favourite people to work with,” says Ewen Leslie, her co-star in Operation Buffalo, in which Jess played a mysterious British meteorologist with Russian heritage. “We had to have a [Cary] Grant and [Katharine] Hepburn relationship and it was instantly easy to build chemistry with her. Our scenes were my favourites.

“We had to have a [Cary] Grant and [Katharine] Hepburn relationship and it was instantly easy to build chemistry with her. Our scenes were my favourites.”

She has a no-bullshit approach to her work. She’s fast, intelligent, prepared, extremely talented and a legitimately good person. A huge part of acting is empathy and Jess has that in spades.” 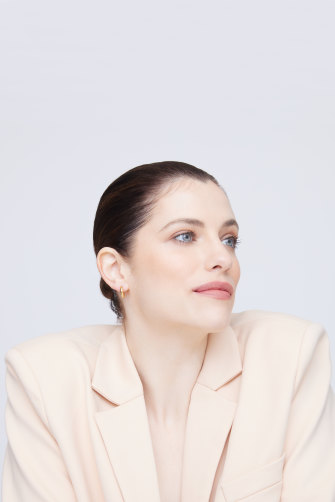 Two roles Jess has played in recent times are notable for their empathy. The first is as Louisa Clintoff, a writer and suffragette from an English liberal family, in Leah Purcell’s feature film The Drover’s Wife: The Legend of Molly Johnson, which re-imagines the Henry Lawson tale as a revenge western told from an Indigenous woman’s perspective. The second is as slavery abolitionist Elizabeth Hawkes in the 2016-17 US series Underground, about the “underground railroad” which helped enslaved African-Americans to escape north between 1790 and 1870.

Jess hadn’t seen the connection between these two characters as saviours until I mention it, but she agrees. “They’re both in the infancy of their activism and really want to contribute to the world in a positive, meaningful way. These are privileged women. They have so far to go. That’s the greatest joy, right, to play flawed characters who aren’t perfect, who have so far to go, but are learning.”

Meanwhile, season two of The Secrets She Keeps ends with an “epic cliff-hanger”, says Jess, which suggests there’s more to come. In the meantime, what’s next for her? “Oh my god, I mean, I literally just wrapped filming yesterday, so …”

Would she take a well-earned holiday now? “Yeah, girlfriend and I are going to go to Melbourne. We’ve been so careful with COVID, so we’re just going to see some friends and eat at some restaurants, and then I head back to London. But yeah, I’ve got a couple of months to … breathe!”