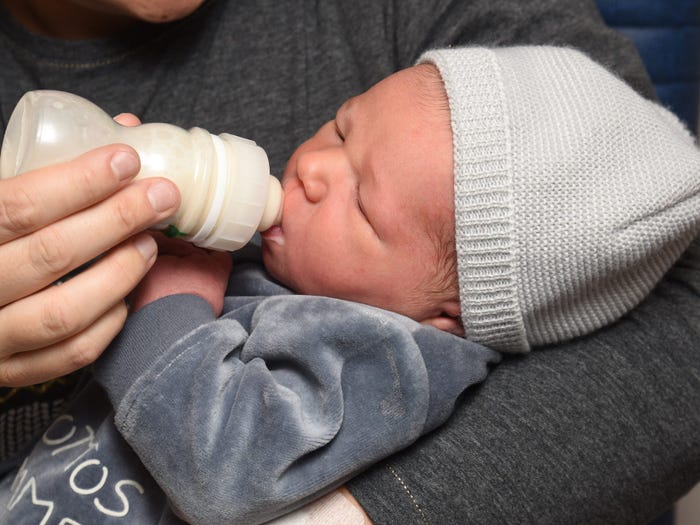 My infant looked at me and stubbornly turned her head, refusing the formula bottle I was offering her. At four months old, she had fallen off her growth curve. After a few weeks of monitoring, the doctor recommended that I start supplementing my nursing with formula. Since I had combo fed my first — using breastmilk and formula — I didn't hesitate. My baby, however, refused to drink the formula.

After a few days of offering formula only to be rebuked, I was frustrated and worried. I emailed the leader of a local breastfeeding group, asking if she knew of anyone willing to donate breast milk. A few days later, a local mom dropped off a large bag of donated breast milk at my house, and my daughter happily gulped it down.

That began a nine-months of milk sharing. My donor had a baby a few months older than mine. Whereas I was struggling to produce enough milk, she had an oversupply. She started pumping once or twice a day, and giving that milk to me.

While sharing breast milk might have an "ick" factor for some people, many parents are turning to donated breast milk to help feed their babies. Formal milk donation banks provide human milk that is critically important for micro-preemies, while informal milk sharing arrangements, like the one I was part of, spring up regularly in Facebook mom groups.

"As we continue to support breastfeeding mothers and focus on the benefits of breast milk, donor breast milk will become another acceptable and hopefully less costly way mothers will be able to feed their babies safely," Dr. Florencia Segura, a pediatrician specializing in infant feeding, told Insider.

The benefits of formal milk donation

There are two different types of donated breast milk. Formal milk donation has lots of oversight, similar to blood donation. It's done through milk banks, and the milk is dispersed to sick infants who have a prescription.

"Formal milk donation programs afford transparency to donor milk recipient families," Segura said. Donors are screened for their health history, and asked about their use of medications, alcohol, tobacco, and drugs. As an added layer of protection, the milk is pasteurized, killing most bacteria and viruses that may be present.

Breast milk distributed by milk banks generally goes to hospitals. It's most important for premature infants, who are born before 34 weeks. When these babies get breast milk, either from their mothers or from donors, they have fewer infections and are less likely to get necrotizing enterocolitis (NEC), a gastrointestinal disease that can be deadly for preemies.

Oftentimes, parents who are looking for breastmilk to supplement their children turn to informal donation.  This is when two or more families make a decision to share milk, without oversight. In some cases, they exchange money, but often the person with the milk is donating it free of charge.

"Many moms turn to informal breast milk donation, whether community or internet-based, because it's often cheaper, more comfortable, and faster," Segura said.

It's up to the parents involved in the milk share to determine their comfort level with donation.

"Even among friends and family, informal milk donations can be riskier since the donor cannot be medically screened," Segura said.

The informal milk sharing group Eats On Feet maintains a guide to asking for and donating breast milk informally. The organization recommends that recipients ask donors a series of questions about their health history, diet, and substance use.

Luckily, my donor was incredibly up front with me. After connecting on Facebook through a mutual friend, we talked by phone. She shared a bit about her health history and diet, as well as her (lack of) drinking and drug use. When she had to start a medication during our milk share, she called me right after her doctor's appointment to relay information about the safety of that medication while breastfeeding.

Overall, I felt comfortable with how we handled the possible risks of donation.

The experience of milk donation

When I gave my daughter a bottle of donor milk, I was happy knowing that someone else — a woman who owed nothing to either of us — was helping me keep my baby safe and fed.

Eventually my youngest started taking formula, which I used alongside donor milk to supplement nursing. There's nothing at all wrong with formula. Both my kids have relied on it. But there's also something sweet about moms helping moms with milk donation.

I stopped nursing when my youngest was a year old, which is also when I stopped using donor milk. My donor, through, was still nursing her toddler, and began donating to newborn twins whose mom was having difficulty producing enough milk. I'm still in awe of how she took the time and effort to help feed babies she barely knew.