The year I turned 40 was the year that changed everything. I didn't expect it to, but once 2011 started, there was no going back. At the time, I was a married mother of two girls, aged four and two.

I'd been a senior public servant for more than 10 years, mainly supporting programs to assist families. Always seeking to improve things, but only seeing a slice of anyone's life. 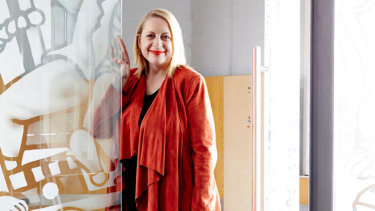 But when I took a year's unpaid leave from the public service to take up a job running Australia's longest-established women's refuge, Elsie, everything that had been abstract coalesced in front of me, in the form of women and children who arrived unsafe, scared and desperately uncertain about what would happen next.

What surprised me most in providing help to women leaving domestic violence was how few beds there were and the desperate Sophie's choice of decision-making every time a room became available.

One afternoon, we had moved a woman and her three children to safe accommodation in a property they could call their own and start afresh. My workers prepared their old room, ready for us to accept another family the next morning.

I'd been at a meeting, and came back to the refuge to be greeted by three caseworkers coming towards me with three clipboards, each telling the story of a woman and children who desperately needed that room.

One was a mother of premature twins, who could not be released from hospital as her home was a site of severe violence. The hospital social worker pleaded with us. If we didn't take her, her babies would have to be removed from her care.

The second was a young Indigenous mother with three children under four. She was in the waiting room at the local police station, with cuts and bruises from an incident the previous night. The police constable pleaded with us to take her: She's got no one in Sydney. She's alone and frightened.

The third was a woman calling from her car just outside of Wollongong. She and her two teenagers had spent the last two nights sleeping there. If we could take her in, she would put her last $30 into petrol for the car and drive to us. Please?

Having to make that decision was one of the hardest things I've done. And you then scramble like hell to find stopgap solutions for the others.

That year, my marriage broke down and I became a single parent myself. Dealing with the departments I used to work for as a "client" reduced me to tears more than once. Money was tight and a number of my long-held hopes for the future cracked one by one.

At the end of the year, my unpaid leave ended and I returned to the public service. I slowly adjusted to a very different life, always underpinned by the nagging disbelief that in 2011 Australia, there weren't enough safe beds for women who needed them. I was desperate to get back to that work.

In late 2012, I met with a new charity dedicated to opening up more shelters. It had a different approach, finding champions within the communities the shelter would serve, helping them to bring a shelter to life.

Early the next year, I was invited to work with them as the inaugural CEO. I had my "fork in the road" moment. I could stay in the public service, with a career track, secure superannuation and low risk. Or I could junk it all, start something new, and back myself to make it work. I was terrified, and did it anyway.

It hasn't always been easy, but after six years Women's Community Shelters runs six shelters, with four more planned. Now more than 100 women and children sleep every night in safe beds that weren't there just five years ago.

We also help women find affordable housing after their stay with us, and work to educate about domestic and family violence at schools, businesses, clubs and community groups.

Recently a Facebook post from 2011 popped up. It said: "The little ceremonies of day-to-day life in a refuge … standing on the porch in the warm autumn sunshine, waving goodbye to a woman and her children off to start a new life of freedom from fear.

My heart is overflowing with happiness today." I don't know if there's a multiplier for "overflowing", but if one exists, that's right where I am.

Annabelle Daniel is the CEO of Women's Community Shelters.

This article appears in Sunday Life magazine within the Sun-Herald and the Sunday Age on sale July 28.