Australians will be promised protection from the rising cost of living in the coming federal budget in a plan to use increasing tax revenue to fund some new payments aimed squarely at families. 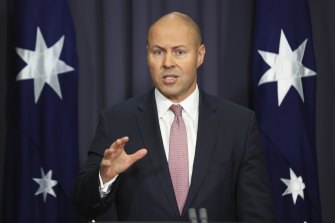 But Mr Frydenberg said he “absolutely” said no to calls for greater spending to recover from the coronavirus pandemic and would instead reveal a budget that used a surprise gain in tax revenue to reduce the deficit rather than spending all the proceeds.

“Families will get additional support through this budget to meet the cost-of-living pressures,” he said in an interview on Friday.

“We’ve already taken steps to provide around $30 billion in tax relief since the start of COVID and to reduce childcare costs as well, with more than $10 billion being invested.

“We’ll see further targeted, proportionate, temporary measures in this budget to address cost-of-living pressures for families and help them during this challenging time.”

In a small sign of the programs to come, the government will announce a $50 million scheme called “Reboot” this weekend to help vulnerable people aged between 15 and 24 who need support to get into the workforce after troubled backgrounds with drugs, abuse or broken homes.

One of the options for new public spending is a one-off payment to those in need to deal with higher petrol bills and other price hikes from the surge in oil prices after Russia invaded Ukraine.

The government included a $75 cash payment to single retirees and $125 for couples in the April 2019 budget before Prime Minister Scott Morrison won a “miracle” election victory six weeks later.

The April 2019 budget also included infrastructure programs that funded local spending commitments in marginal seats, including a four-fold expansion of the Urban Congestion Fund to $4 billion to pay for projects, such as commuter car parks, that were later the subject of scathing reports from the Auditor-General.

Shadow treasurer Jim Chalmers said the government was acting too late when wages were forecast to fall in real terms this year and the cost of living had been rising before the war in Ukraine.

“The key issue in the economy at the moment is that the costs of living are skyrocketing, real wages are falling and Australian working families are falling even further behind.”

Asked whether Labor would support a one-off payment to help families with the cost of living, Mr Chalmers said: “Let’s see what kind of budget we would inherit.”

With federal gross debt worth $863.6 billion on Friday and the annual interest bill forecast to cost $17.8 billion this year and more in later years as interest rates rise, the government’s core argument in the budget is that it will reduce debt as a proportion of the economy by growing the latter faster than interest rates.

But with inflation on the rise around the world and the Russian invasion of Ukraine sending commodity prices soaring, Mr Frydenberg acknowledged the uncertainty about forecasts that would add tens of billions of dollars to tax revenue from coal, gas and iron ore.

Deficits have swollen over the past decade due to unforeseen shocks including the pandemic but also because governments have repeatedly promised new spending on the assumption of future tax revenue that does not arrive.

Mr Frydenberg promised a “fiscal dividend” from the economic rebound including “stabilising” gross debt as a proportion of the economy – rather than in absolute terms – and said this would be based on a “conservative approach” to commodity prices.

“The budget’s going to focus on the immediate challenges we face: the cost of living, the COVID response, coping with the rebuild following the floods,” he said.

“The second thing the budget will do is make substantial new investments as part of our economic plan skills, infrastructure region’s manufacturing, digital economy and energy. And of course, there’ll be significant focus also on national security.”

He said he had refused spending demands from interest groups and others, pointing to his record in turning down calls from Labor leader Anthony Albanese to continue spending.

“When I ended JobKeeper in March of last year, Anthony Albanese said the economic roof would come crashing down, but within the next three months 120,000 more jobs were created,” he said.

“When we said no and we ended the COVID disaster payments in October last year after the Delta outbreak, [Labor] senator Katy Gallagher said we should keep that support going – and in November we saw the single biggest monthly increase in jobs on record.

“Then NSW and other states asked for some further funding and we said no, based on the support that was already in place, and the recovery that was underway. Labor again criticised us for that.

“And then we saw the next month, the unemployment rate fell to its lowest level in 13 years.

“We’ve taken the hard calls and the right calls to end the emergency economic support.

The remarks signal an election fight to come over rival spending plans when Labor has indicated it wants to show a budget bottom line that does not leave Australia with bigger debts and deficits.

With Treasury officials estimating that 150,000 people have been unemployed for more than a year and many of them are relatively young, the government will use the budget to show it can drive unemployment below 4 per cent.

Skilled foreign workers will also figure in the plan, however, with official forecasts showing temporary workers are coming back to Australia in a “gradual return” to net overseas migration of about 235,000 people a year, the level before the pandemic.

Mr Frydenberg said he believed in a strong migrant intake and a multicultural Australia but expected the pandemic to continue to depress population growth, with the forecasts showing the overall population would be 1.5 million people lower after 10 years than expected before COVID-19.