According to The Crown, Camilla, Duchess of Cornwall, delivered arguably one of the best chat-up lines in history when she first met Prince Charles 50 years ago. It was in 1971 that the star-crossed lovers are thought to have initially clapped eyes on each other during a polo match. After introducing herself as Camilla Shand, the then 24-year-old allegedly said to the future king: “You know, sir, my great-grandmother was the mistress of your great-great-grandfather, so, how about it?” Charles, who was 23 at the time, was reportedly left speechless.

Prince Charles and Camilla at a polo match in 1975.Credit:Shutterstock

But it didn’t quite happen like that. While they did frequently meet on the fringes of polo matches in the early 1970s, as their biographer Gyles Brandreth discovered, they were first introduced by Lucia Santa Cruz, the glamorous daughter of the former Chilean ambassador. Regardless of what Camilla may or may not have said, as Brandreth wrote in his 2005 book Portrait of a Love Affair: “The attraction between Charles and Camilla was immediate and mutual, and passionate.”

Half a century on, having softened her look and uncomplainingly got on with the job, the 74-year-old Duchess has slowly won over the British public and is now the 10th most popular member of the royal family, with a higher approval rating than Harry and Meghan. The dark days of being the “third person” in the Prince and Princess of Wales’s marriage are well behind her.

How has she managed such a remarkable rehabilitation? It’s certainly helped that Charles, 72, had Camilla’s back throughout their covert courtship and beyond their 2005 wedding.

The Prince was instantly captivated by the former debutante, with her unaffected dress sense and similarly down-to-earth manner. The daughter of Major Bruce Shand and his wife Rosalind, despite her aristocratic heritage, appeared refreshingly unstuffy and game for a laugh. As Charles told Brandreth, he loved the fact that she “wasn’t brittle or pseudosophisticated”, but uncomplicated and fun. They quickly bonded over their love of The Goon Show, as well as their passions for polo, painting and the great outdoors.

In many ways, it was the perfect match, and yet Camilla ended up marrying army officer Andrew Parker Bowles in 1973, after having had a lengthy on-off relationship with him. Some blamed the fact that Charles had to travel overseas with the Royal Navy. Others said it was because many behind Palace gates felt that Camilla was an unsuitable match for the future king. 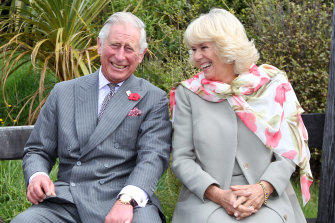 The Prince and Camilla on tour in New Zealand in 2015.Credit:Getty Images

In 2005, the Queen’s cousin and Charles’s godmother, Patricia Mountbatten, revealed: “With hindsight, you can say that Charles should have married Camilla when he first had the chance. They were ideally suited, we know that now. But it wasn’t possible. It wouldn’t have been possible, not then.”

Nevertheless, they remained friends and rekindled their romance – apparently with Brigadier Parker Bowles’s blessing. Camilla’s first marriage was dissolved in 1995. Mrs Parker Bowles was in the congregation at St Paul’s Cathedral when Charles married Lady Diana Spencer in 1981. In a 1994 interview with Jonathan Dimbleby, the Prince insisted he and Camilla only embarked on an affair after his marriage with Diana had “irretrievably broken down”, but it is now widely believed that they had relit the fires before Diana walked down the aisle.

It was not until 1992, with the publication of Andrew Morton’s Diana: Her True Story, that their affair became public knowledge. This was followed by the “Camillagate” tape scandal in 1993, when the transcript of an intimate telephone conversation between Camilla and Charles was published in the tabloid newspapers.

While the Prince’s reputation was badly damaged, Camilla bore the brunt of the vilification. The animosity reached fever pitch after Diana died in a car crash in Paris in 1997. In an interview to mark her 70th birthday in 2017, Camilla admitted: “It was horrid. It was a deeply unpleasant time and I wouldn’t want to put my worst enemy through it.”

The Duchess could not have survived that time without the support of her son Tom, now 46, daughter Laura, 43, sister Annabel Elliot and brother Mark Shand, who died in 2014 after a fall in New York. Despite the scrutiny they have faced over the years, Camilla’s family have not put a foot wrong (bar Tom’s admission that he has taken cocaine), and have remained unwaveringly loyal and discreet.

Those who know the Duchess best agree that while she was sometimes “hurt” by the negative press, she never really let it get to her. As one source puts it: “She didn’t really complain about how she was treated. She would get upset sometimes and wonder how long it would go on for, but she always adopted a very English, Home Counties sort of approach to life.”

A former employee who first met Camilla in 2004 reveals: “She wasn’t fearful of the press, which was quite unanticipated. She understands the media well … she loves a gossip, she loves a good story. Everyone in her family has got opinions that they freely express and she loves that.

“She didn’t really complain about how she was treated. She would get upset sometimes and wonder how long it would go on for, but she always adopted a very English, Home Counties sort of approach to life.”

“I’ve always thought if you want to chart the journey, how has she got to where she is now, it starts off with her personality and her character. She’s a brave, strong person.”

Her laid-back manner has sometimes been interpreted as laziness, although as one friend points out, “She is working well beyond retirement age.” And despite being six years shy of 80, she will play a central role at the helm of Charles’s slimmed-down monarchy.

It is a daunting prospect. As the Duchess herself once admitted: “Sometimes you get up in the morning and think you can’t do it, and you just have to. The minute you stop it’s like
a balloon, you run out of puff – you sort of collapse in a heap.”

Yet her life experience has proved an asset to the royal family and to a prince who has at times been accused of rather prissy and entitled behaviour. “The Prince trusts her judgment,” says a source. “So while she may not be in the driving seat, she is very much the support act.” 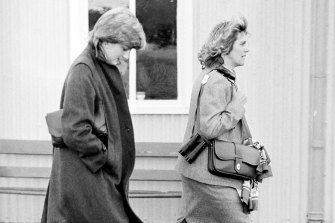 Described as someone who would “not shy away from expressing what she thinks about a situation” and “with very good instincts”, the value of Camilla’s emotional backing should not be underestimated either. Friends say that throughout the fallout from Megxit, which has affected Charles “very deeply”, his wife has been his crutch.

There is a clear sense – although Clarence House would not care to admit it – that they feel terribly let down by Harry and Meghan’s decision to unleash their interview with Oprah Winfrey on the royal family. One source goes so far as to suggest, “I don’t think the Duchess will ever forgive Meghan for what she’s done to the Prince of Wales,” although as per Buckingham Palace’s various statements, the Sussexes remain “much-loved members of the family”.

“When he [Charles] becomes king, she’ll understand the need to be by his side – as the Duke of Edinburgh was for the Queen – and I don’t think she’s daunted by that,” says a friend.

Brandreth agrees: “It’s clear, seeing them together, that it’s a perfect fit. She’s playful with him and ultimately she makes him happy. She has no desire to be in the limelight at all. There’s no competition. All she wants is for him to do well.”

“The Prince trusts her judgment. So while she may not be in the driving seat, she is very much the support act.”

The Queen also likes Camilla and appreciates how supportive she has been of her son and heir. As Penny Junor wrote in her 2017 book, The Duchess: The Untold Story, Camilla felt accepted when the Queen gave a touching speech at their wedding, likening them to horses in the Grand National who’d made it to the winners’ enclosure.

Yet will Camilla inherit her mother-in-law’s title? Clarence House insisted on their wedding day she will be known as “Princess Consort” when the time comes, even though the title has no historical precedent – under English common law, the wives of kings automatically become queens.

Sixteen years on, there is growing evidence to suggest that she will take the title “Queen Consort” instead. In 2018, Clarence House removed all references to “Princess Consort” from its website. “He will 100 per cent insist on her being queen,” says a former courtier. “The references to Princess Consort infuriated the Prince.”

But will the public accept it? Having supported charitable endeavours, including children’s literacy and women suffering from domestic abuse and sexual violence, she has arguably earned her public-service stripes.

After initially being advised by public relations expert Mark Bolland in the lead-up to their marriage,
Camilla has slowly reconstructed her reputation with the help of a string of communications experts. 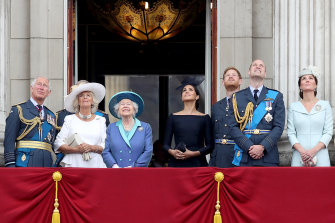 Charles and Camilla with the Queen in 2018.Credit:Getty Images

According to one former adviser, who remembers how nervous Camilla was when she made her first official appearance as Charles’s girlfriend, at her sister’s birthday party at The Ritz in 1999, “She was not only anxious about the whole coming-out process, but whether she would have the stamina to deal with it.

“Over the past 20 years, she’s adapted. It’s extraordinary how confident she is, how popular she’s become. There’s still some lingering negativity, but it was only ever a question of time. People have got to know her. Now people think we probably owe it to her for her to be queen consort.”

Another aide points out that a turning point came when Princes William and Harry happily appeared at the couple’s side on their wedding day. “There was a sense that if Diana’s sons had accepted her, so should we.”

“There’s still some lingering negativity, but it was only ever a question of time. People have got to know her. Now people think we probably owe it to her for her to be queen consort.”

According to one source: “It’s been difficult, but I think they both now accept that Camilla makes Charles a better man. She’s very jolly and always makes an effort with them and their wives; [Camilla] would never have dreamed of trying to replace Diana, but she is naturally quite mumsy.

“Princess Anne is universally respected because she is who she is – and I think it’s the same with Camilla,” says the aide. “What you see is what you get. She’s unselfconscious, unpushy and on message and she gets on with the job. She’s respected and admired and liked a lot – some people may now even love her.”

All the Duchess of Cornwall has ever needed is the love of her husband, and it seems the public is finally understanding what Charles saw in her 50 years ago.

This article appears in Sunday Life magazine within the Sun-Herald and the Sunday Age on sale September 12. To read more from Sunday Life, visit The Sydney Morning Herald and The Age.

Make the most of your health, relationships, fitness and nutrition with our Live Well newsletter. Get it in your inbox every Monday.

Most Viewed in Lifestyle