‘I’m devastated, betrayed, and furious’: Mom-of-two slams her ‘unvaccinated, conspiracy-theory-minded’ husband who DELIBERATELY got infected with COVID and exposed the whole family

A mother-of-two has shared her fury and devastation after her unvaccinated husband ‘deliberately’ exposed himself to COVID-19 and then, once he caught it, brought it home to expose her and and their two unvaccinated children.

The woman wrote to Salon’s ‘Pandemic Problems’ advice column about the incident, explaining that her husband drove two hours to spend the weekend with a friend — after finding out that the friend’s wife had COVID-19.

The husband — whom she described as ‘unvaccinated and conspiracy-theory minded with anger against authority issues’ — quickly caught the virus himself and was already exhibiting symptoms by the time he came home, exposing both the woman, a seven-year-old child, and a 15-month-old baby to the virus.

She said she is now ‘devastated, betrayed, and furious,’ writing that ‘he absolutely knew what he was doing, understood potential consequences — not just for his own health but for his family — and decided that neither me or my kids had any right or say in his choice to do this.’ 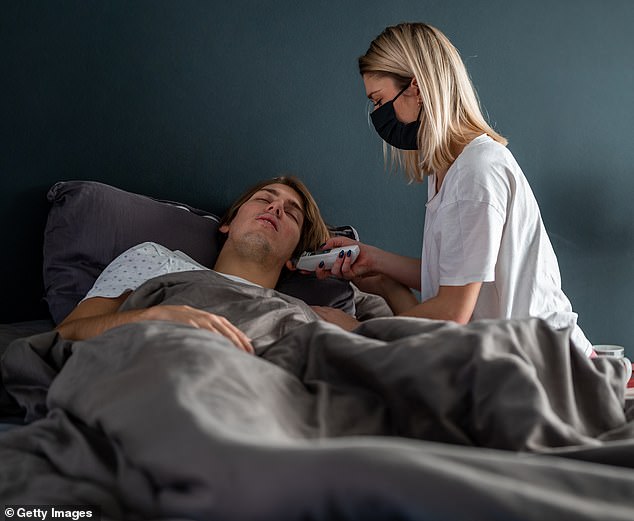 A woman said her husband drove two hours to spend a weekend with a friend after learning the friend’s wife had COVID. He got sick and brought it home to his family [stock photo]

The woman is vaccinated against COVID-19, but says that her two young children are not.

The country where she lives has not yet authorized vaccines for children their age, so it is not even possible for them to have had the shot.

Meanwhile, her husband has chosen not to get vaccinated at all — and is clearly not taking the pandemic, which has killed 5.33 million people worldwide in just two year, seriously.

Last Friday, she said, her husband found out that his friend’s wife had tested positive for COVID-19.

The next day, he decided to drive two hours to visit that friend and his wife, and spend the weekend at their place.

‘He insists he wasn’t “planning” to catch COVID, he just “refuses to live his life in fear” … but when he returned on Monday, he already had symptoms coming on, and on Tuesday I insisted he get tested. He tested positive for delta,’ she wrote.

‘I feel devastated, betrayed, and furious,’ she said.

‘I feel like he absolutely knew what he was doing, understood potential consequences — not just for his own health but for his family — and decided that neither me or my kids had any right or say in his choice to do this.

‘He told me that he hadn’t “planned” to catch Covid, but I don’t see many other ways of interpreting this, outside of sheer stupid recklessness and the belief that consequences apply to everyone except him.’

Though neither she nor her kids appear to have tested positive for the virus yet, his recklessness has already majorly impacted their lives.

The woman has kept both of her kids home from school and childcare so as not to expose others, but that means that she has to take on home-schooling ‘and cope with the fallout from his decision entirely on my own, including missing work.’

The kids are also being tested and will spend 17 days in quarantine.

Though the woman is clearly furious, she said she has not ‘blown up or said anything in anger,’ but has only told him sadly that she didn’t understand how he could do such a thing.

She even made him soup and picked him up medication from the pharmacy. 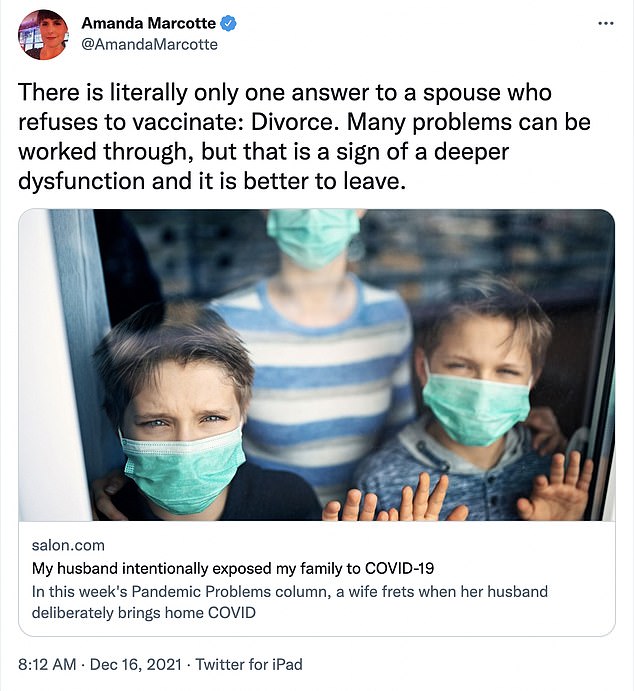 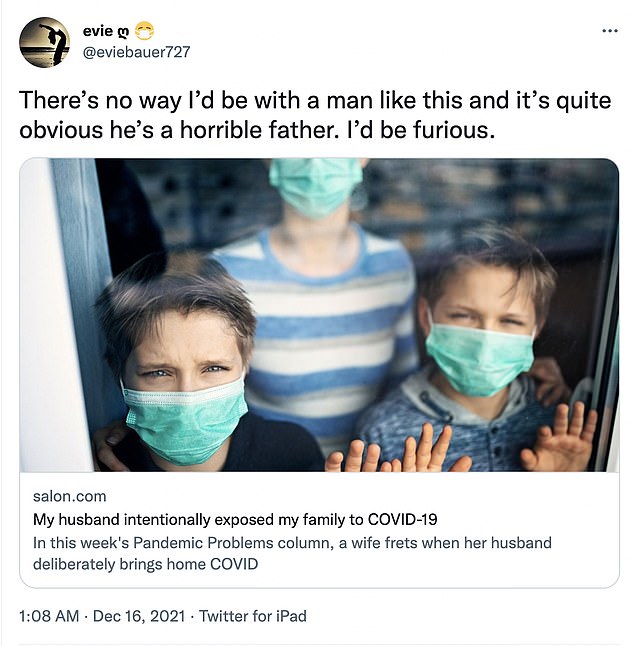 A handful of Twitter commenters are also horrified, with one writing: ‘There’s no way I’d be with a man like this and it’s quite obvious he’s a horrible father. I’d be furious’

And despite the consequences of his actions, she said, he has expressed a desire to spend the week of Christmas with the couple who infected him — and to bring the kids.

‘I don’t trust him. I feel helpless and I don’t know how to approach any of this,’ she wrote.

Salon’s columnist, Nicole Karlis, was stunned by the letter, describing the woman’s husband as ‘selfish and reckless’.

She also talked to clinical psychologist Dr. Carla Marie Manly, who warned of ‘underlying narcissistic tendencies that will make the relationship difficult to bear in the long term.’

She even suggested that if her husband does take the kids to an ‘unsafe situation,’ as he threatened, she should consider calling the police.

A handful of Twitter commenters are also horrified, with one writing: ‘There’s no way I’d be with a man like this and it’s quite obvious he’s a horrible father. I’d be furious.’

‘There is literally only one answer to a spouse who refuses to vaccinate: Divorce,’ tweeted Amanda Marcotte, a politics writer for Salon. ‘Many problems can be worked through, but that is a sign of a deeper dysfunction and it is better to leave.’

‘It may be time to cut bait,’ another agreed. ‘This selfish and ignorant behavior may result in the death of one of the children if not the wife.’