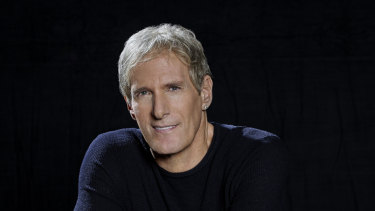 Looking back, my mother, Helen, was stronger than any of us. Women are permitted, encouraged and expected to feel, to be emotionally aware, to bear the emotional responsibility of an entire family. My mother became all of that, as well as the primary provider for my brother Orrin, sister Sandra and myself after a lengthy, drama-filled divorce from my father, George.

I started dating in my teens. Being the lead singer in a band brought opportunities to meet all kinds of interesting women, but dating was just all about fun in those days.

By my late 20s I was already married [to Maureen McGuire] and had three daughters [Isa, Holly, and Taryn]. Guys in their 20s don't have a clue who they are as human beings. They know what they want to become – a doctor, a lawyer, a politician – but the proper study of one's own self? Men don't get around to that until their 30s or 40s, which is roughly 10 years later than most women, who seem to know exactly who they are. Once you have a family you realise pretty quickly, because your kids become front and centre. They become the most important thing.

I've been married before and I'd get married again [Bolton got divorced in 1990]. Marriage is the expression and physical manifestation of a mutual, deep bond and serious commitment between two people. I believe in marriage, especially when there are plans for having a family. But the quality of the relationship will determine the strength of any marriage to endure. It's not just a certificate, it's the person you choose to be your lover, partner, confidant and closest friend in the world for a lifetime. Chemistry and mutual respect are so important, because challenges and rough patches will come.

Dating through the years has been fun. Also exciting, often highly illuminating and deeply stimulating – or not so much! My friends around me are using Tinder and other dating apps, but I can't really use them. To me, it's strange only because I'm not participating in it. Different generations have their rites of passage and choices. It's an individual decision about how you want to meet people and how you want them in your lives.

I don't judge those only looking for someone for a night or a weekend, because then I'd sound like my father! It's just a sign of the times. I still think love is the most powerful experience you can have. Perhaps the younger people on these apps might take a little longer before they come to that conclusion.

To impress a woman, the most important thing is to be yourself. So, no bullshit. Be yourself the whole time, but listen and be locked on to her eyes, her face, her body language. Listen to anything and everything she says. Be curious to ask her questions about the things and people who matter to her, and notice the tones in her voice when she answers. You want to know everything about this woman and everything that's important to her.

Attempting to impress is unwise if it's not happening naturally – you can look like you're trying too hard. When your ultimate plan is to seal the deal, being impressive is good and wins you points, and maybe makes you more attractive, too. But I don't know a better way to succeed than being the greatest listener you can be.

I love it when I get fan mail, when a person shares what my music means to them and how it has helped them, whether it be part of their great love story, or during a tough breakup, or a health battle. The significance of music in this respect is something I never anticipated when I was a very hungry, struggling artist. Now I appreciate it very deeply.

Sometimes I don't appreciate things fully until somebody reminds me just how big they are. When I look at how long it took me to get where I am, and how much I had to give to be able to create on my own terms, and to have success, I never take it for granted.

A Symphony of Hits is out now.

This article appears in Sunday Life magazine within the Sun-Herald and the Sunday Age on sale July 28.