Plus: Will HBO finally admit “Watchmen” is a sequel, and will we learn anything more about Amazon’s “Lord of the Rings”? 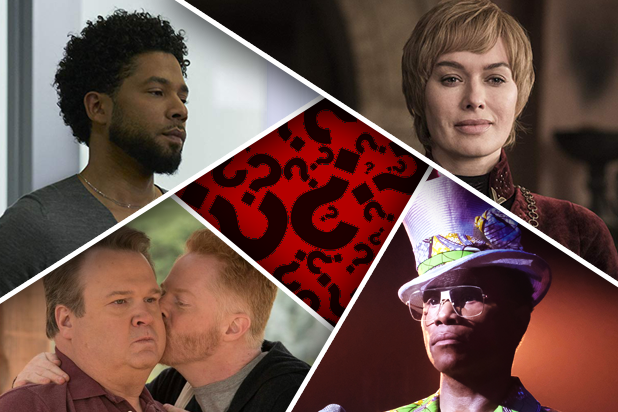 It’s the dog days of summer, which in the TV world can only mean one thing: Time for another Television Critics Association (TCA) Summer Press Tour.

The twice-annual TCA event officially begins Tuesday morning, with A+E Networks and Nat GEO kicking off the weeks-long festivities at the Beverly Hilton Hotel in Beverly Hills, California. But before it wraps on Aug. 8, broadcast, cable and a growing sampling of streaming networks will present their upcoming series to TV critics, serving up their casts, showrunners and a few executives for a little Q&A.

TheWrap‘s got some burning questions before we even start, however — see what we’re pondering below.

So, is “Watchmen” a sequel or what?
The recently-released trailer for the upcoming HBO series finally gave a few hints at just what Damon Lindelof is planning for his adaptation of Alan Moore’s acclaimed work. It appears “Watchmen” will take place after the events of the 12-issue novel series, but Lindelof has previously said it is not a “sequel” or “remake.” We’ll finally get a chance to hear just what he means by that.

We’re still waiting on a bunch of HBO premiere dates
There are a handful of premiere dates we’re still waiting on from HBO. Here’s what still needs to be nailed down: “Westworld” is set to return with Season 3 sometime in 2020; “Watchmen” is set to premiere in October of this year; the sixth and final season of “Silicon Valley” and the first season of “His Dark Materials” are expected to drop this fall.

Will Jussie Smollett return to “Empire”?
Jussie Smollett was written out of the Fox musical drama that launched his career at the end of last season, and both network and studio said at the time there were no plans for him to return for the show’s final bow. Later reports that the embattled actor was in early talks to return for a guest appearance were shot down by co-creator Lee Daniels on Twitter, but do they indicate Fox is softening its stance now that Smollett’s legal troubles seem to have subsided?

Who will be the big winner at the TCA Awards?
This year’s nominees for Program of the Year include two each for HBO and Netflix — the platforms are neck and neck with 15 and 14 nominations total, respectively. Netflix’s “Russian Doll” and FX’s “Pose” are the darlings with four nominations each, and they’ll compete for Program of the Year against strong contenders like HBO’s “Game of Thrones” and “Chernobyl,” Netflix’s “When They See Us,” and Amazon’s “Fleabag.” “Russian Doll” and “Pose” are also in the running for Outstanding New Program, with the latter’s star Billy Porter up for Individual Achievement in Drama, and the former’s star Natasha Lyonne up for the same award in Comedy.

Where we at with those other “Game of Thrones” spinoffs?
In February, at the last TCA press tour, HBO Programming chief Casey Bloys told TheWrap that only one “Game of Thrones” spinoff was being put into production, but that “some are still in development.” In May, the franchise’s source material author George R.R. Martin said that three of the initially planned five spinoffs “are still moving forward nicely.” HBO has not commented on the loose-lipped Martin’s remarks, but Bloys will have a hard time avoiding them this week. Specifics, Casey. We want specifics.

Is “Big Little Lies” done for real?
Showrunner David E. Kelley and co. have said there are “no plans” for another season of HBO’s star-studded drama, but we’ve heard this song before, and look how that turned out. Now that the second season of “Big Little Lies” has wrapped up its run with even high ratings than the first, we’ll be on the lookout for any signal HBO might be changing its tune.

Will Jim Carrey paint for us?
Jim Carrey will be on hand this year to represent his Showtime series “Kidding,” and we can’t help but wonder if there’s a chance the legendary comedian might live paint for us one of his famous, and often politically motivated, pieces of art. TCA is long (nearly three weeks this year!) so anything to liven up the proceedings would be welcome.

Modern-day “Modern Family”?
One of broadcast television’s best sitcoms of all time, “Modern Family,” is coming to a conclusion after a final run. Since announcing the upcoming end at February’s TCA, reporters have been hounding new ABC Entertainment head Karey Burke about a potential spinoff. Would it be Mitch and Cam? Haley and Dylan and the twins? (Please that first one and please not that second one, by the way.)

It’d be a good bet that Burke will be asked more about that at this TCA. And while we’re at it, one more for Karey and her bosses: Can you bring “Speechless” back on one of your million platforms, Disney?

Will the inevitable CBS-Viacom merger hang over CBS’ TCA day?
Both companies have set an informal Aug. 8 date to close their long-awaited merger (Viacom is set to announce its second quarter earnings in the morning that day, with CBS going after the bell). CBS is scheduled to take the TCA stage a few days before that, so it will either be a lot of “no comments” or they’ll be celebrating their new Viacom compatriots.

Will we hear anything about these planned “Power” spinoffs?
Starz is going all out this year to salute “Power” as it ends its run this year after six seasons, with two separate panels. “Power” creator Courtney Kemp last year signed an overall deal with Starz’s parent company Lionsgate that would include spinoffs of the drama. Will we hear any details?

Amazon’s slow-burn on “Lord of Rings” news
It’s been almost two years since Amazon first announced its plans to develop a TV series version set in Middle Earth, and details have been few and far between. We know when it’s set and the talent behind the camera, but we don’t know exactly what’s about or who will be in it. And while Jen Saalke is on stage, how about that global spy franchise from the Russo Brothers?

What’s up with “Atlanta”?
FX’s “Atlanta” was renewed for a third season in 2018, and it was slated to premiere sometime in 2019 — but we’re already halfway through the year, and production has yet to begin. Question marks were raised earlier this month when the series’ creator, Donald Glover, said on “Jimmy Kimmel Live!”  that his “contract says” he has to say “yes,” he is writing Season 3 — but is he really? We just don’t know.