A letter created by the group Arts for Afghanistan ahead of Tuesday’s evacuation deadline urges the inclusion of ”artists, filmmakers, performers and writers“ 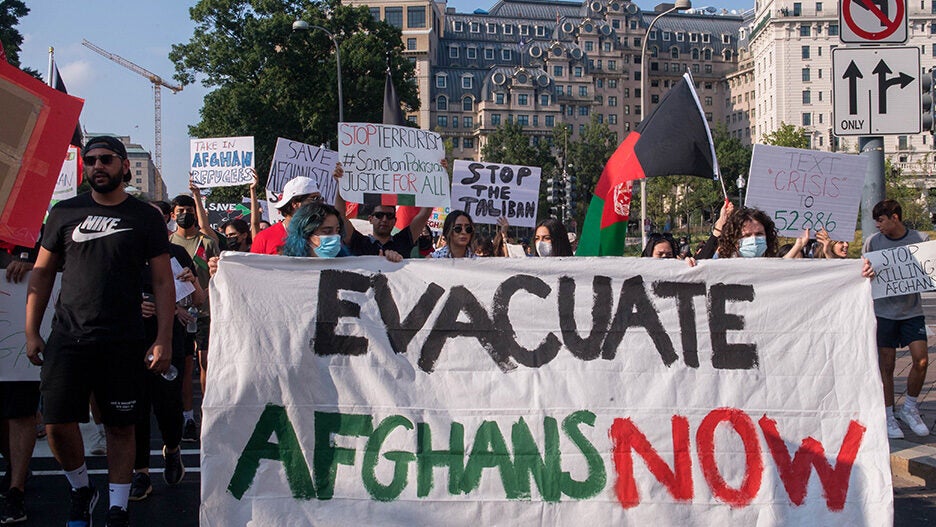 Demonstrators from the “Save Afghan Lives” protest on August 28, 2021 in Washington, DC. (Photo by Liz Lynch/Getty Images)

More than 900 signees — including art-focused organizations and individuals — are urging the American government to evacuate artists, filmmakers and more from Afghanistan.

“We are writing to urge the United States government to do everything in its power to facilitate the departure from Afghanistan of at-risk Afghans, and to include artists, filmmakers, performers, and writers in that category. As a group of individuals—artists, filmmakers, performers, writers, curators—and institutions, acting in solidarity with our peers in Afghanistan, we recognize the vulnerability of the country’s cultural workers, who are already being targeted by the Taliban and forced into hiding,” says the letter, which was initially created by Arts for Afghanistan on August 24. “Like Afghan journalists, activists, and citizens who have assisted the US, cultural workers face threats to their lives because of the work they’ve done—and they are unlikely to get out of the country without immediate changes to Washington’s approach to granting visas and providing flights.”

Using a Google Doc, the letter’s creators opened it up to individual signers. Among the organization that have added their names are France’s ACA Project, the Afghan American Artists and Writers Association, Artists at Risk, the Asian American Arts Alliance, the Authors Guild, the Film Festival Alliance, the Freelancers Union, the National Writers Union, the New York Foundation for the Arts and PEN America. The US Department of Arts and Culture also appears on the list.

The letter urges the government to take immediate action through the State Department and Department of Homeland Security to expedite visa processing and provide asylum for vulnerable Afghans and include cultural workers in the categories being used to put at-risk Afghans on evacuation lists. Other recommendations include holding the Taliban accountable for commitments made during the Doha negotiations, removing quotas for Afghan refugees, halting deportations of Afghan refugees and keeping the Kabul airport open until all at-risk Afghans who want to evacuate have been able to.

“Even before the Taliban’s takeover, cultural workers took grave risks in depicting the experiences and articulating the aspirations of Afghans, with the encouragement—and, often, direct support—of the US government. Now, the vocation of truth-telling has become much more dangerous, and many of our peers see no choice but to leave the country. In addition to standing with advocates for journalists and activists, we insist on the protection of all who have devoted themselves to fostering free expression and civil society in Afghanistan,” says the letter.

President Joe Biden declared earlier this month that Tuesday is the deadline for American troops to be pulled from the country, which recently fell to Taliban rule.