The short answer: No. November will likely be flat, or close. While October 2021 box office represented 79 percent of 2019 (the last normal year), November looks unlikely to even hit 70 percent ($671 million).

October was a step in the right direction, but the top players’ uneven performances mutes its positives. Only “Venom” (now at $190 million) can claim to have performed at a pre-Covid level.  “Halloween Kills,” “The Addams Family 2,” and “Dune” all grossed over $40 million last month, and presumably concurrent home play reduced their theatrical performances. To what degree, no one knows, but each had elevated marketing meant to enhance nontheatrical play.

Full disclosure: The estimates that follow are fairly conservative and multiple films will need to prove me wrong in order for November to meet October’s results. Something close to that result — $622 million — is certainly possible. That represented 79 percent of October 2019; it would represent 65 percent of November 2019 and make December even more critical. 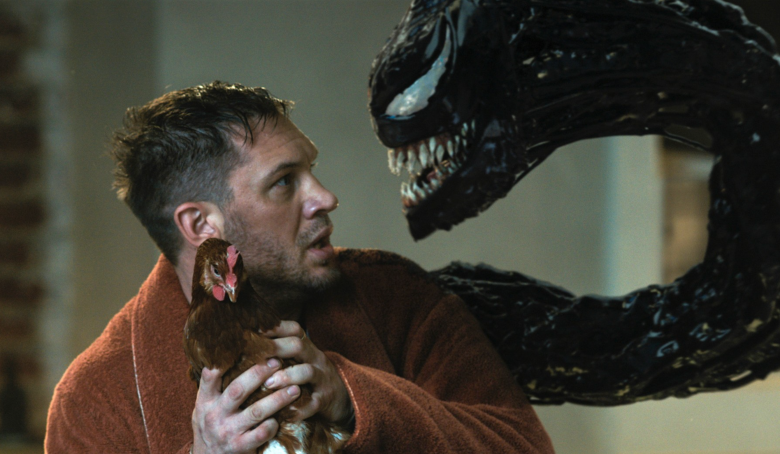 “Venom: Let There Be Carnage”

October was more a fluke than the new normal

Last month had four films that opened over $40 million. That’s unusual for October, which usually has one or none. (2018 had three). Of course, October was an unusual month; “No Time to Die” and “Dune” landed there after multiple Covid date changes. The dates made sense this year, but likely would not otherwise.

This November has a number of big films, but none are likely to be in the same league as “Frozen II” in 2019. There’s also fewer big titles than November 2018, when five films opened over $50 million (including “Creed II” over the extended Thanksgiving weekend.)

October had 10 wide studio release; this month will have seven. However, none seem likely to be sub-$5 million debuts like “The Last Duel” or “The Many Saints of Newark.” Last month also had five weekends, which marginally boosted totals.

“Eternals” should provide the highest gross over the month with a pre-opening estimate as high as $80 million (in the range of recent Marvels “Black Widow” and “Shang-Chi: The Legend of the Ten Rings”). At that level, it falls short of “normal” MCU openings over $100 million.

Unknown is whether audience reaction will mirror the mixed critical reaction (a score of 52 on Metacritic) along with the toxic advance response on social media. The box office needs “Eternals” to contribute at least $200 million; if it falls short, so will the month.

“Encanto” (November 24) is more challenged. It’s original IP rather than a sequel or franchise and has only seven days to play in the month, although they include Thanksgiving weekend. Grossing $100 million would be a decent result, but it can’t compare to the $271 grossed by “Frozen II” in 2019.

The rest of the months has a few potential breakouts, but they would contribute less than $100 million each.

First is “Clifford the Red Dog.” Like “The PAW Patrol,” this will also be streaming (on Paramount Plus, from November 10). “PAW” grossed $32 million in its first 21 days and “Clifford” is expected to a bigger draw with a Thanksgiving boost. Figure $60 million is possible, conceivably more.

November 19 is “Ghostbusters: Afterlife” (Sony) and “King Richard” (Warner Bros./HBO Max). The latest reworking of the classic comedy franchise is expected to open as high as $50 million. Biopic “King Richard” starring Will Smith has Best Actor potential, but it’s not expected to open as strongly as many of his releases. Both films have 12 November days; with the holiday boost, “Ghostbusters” has the better chance to approach $100 million.

November 24 sees “The House of Gucci” (United Artists) and “Resident Evil: Welcome to Raccoon” (Sony). Ridley Scott’s film has older audience appeal on a weekend that sees a lot of family activity; its potential lies in long legs rather than immediate impact. Thanksgiving is an unusual date for a horror film and the “Resident” franchise is more of an international play. Combined, they might add $50 million to the total.

Holdovers, with “Dune” as the biggest player, could add at most $100 million. Two prime awards contenders — “Spencer” (Neon) and “Belfast” (Focus) — open this week and next. Along with other specialized films, they could add $25 million combined.

All told, October may be the high point for a while. Multiple films in November will need to better these estimates to reach even October’s stronger results. But $622 million – October’s total – is closer to what is likely. And unlike last month’s 79 percent share of what 2019 did, that would be 65 percent. That makes December even more critical.